On August 3, 1950, Curtis Shedd stopped by the Walhalla, South Carolina, home of his trade school pal, John Boyter, to pick-up Boyter’s two daughters for an afternoon of cruising around the countryside. Earlier that day, Boyter was seen in Shedd’s car as the two drove around town. He was never seen alive after that morning. 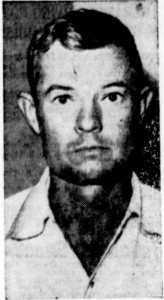 Six days later, John Boyter’s body was found near a logging road in a heavily wooded area just across the South Carolina/Georgia state line. The thirty-eight-year-old had been beaten with rifle butts to the bead, and murdered with a shotgun blast to the chest.

Shedd was arrested on Saturday, August 12, after he returned to attending trade school classes where he pretended like nothing had happened.

He initially denied murdering his friend, and claimed he did not know the whereabouts of Boyter’s two daughters, Jonnie Mae, 14, and Jo Ann, 8. However, the girls’ grandmother reported they were last seen getting in Shedd’s car.

Thirty-year-old Shedd turned out to be a recently released convict who had twice served two-year sentences for robbery in separate cases. Shedd eventually cracked under a grueling interrogation and told officers that he had raped and strangled the two girls, and left their bodies in a lonely, wooded ravine near Highlands, North Carolina.

After his confession, a crowd of an estimated 4,000 people gathered in Walhalla, where Shedd was being held in the local jail. Although most of them were just curious about the man who had committed the worst local crime in decades, shouts of “We want Shedd. . . we’ll kill him!” were heard. Fearing a lynching, which hadn’t occurred in that county in twenty-years, the sheriff requested and received fifty armed soldiers from the South Carolina National Guard. They surrounded the jail and stood as buffer between the angry throng of revenge seekers and Curtis Shedd.

The local sheriff told the crowd to “go on home and let law and order take its course.” He added that he begged the men to “pray and head your Bibles” and then come back if they thought it was God’s way. They moved off slowly after the appeal and Shedd was slipped out of town and moved to a jail in Georgia where a murder warrant for the death of John Boyter had been filed. This charge was later dropped in favor of putting Shedd on trial for the rape and murder of the two girls in North Carolina.

Shedd was tried in December 1950 in Franklin, South Carolina, where a jury found him guilty and sentenced him to death. He was then executed on March 23, 1951, seven months and three weeks after he kidnapped, raped and murdered Jonnie Mae and Jo Ann Boyter.

You can read more about Curtis Shedd from Google Newspaper Archives.