This book is a collection of true crime stories from different countries (Japan, France, Italy, the UK, and the US) and different time periods that defy simple description. They include: 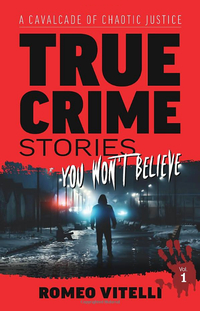 • The strange tale of a psychotic geisha who severed her lover’s genitals to carry as a token of her love and who inspired a cult following
• How a small-town murderer helped inspire the movie Psycho and left his hometown with a reputation they never lived down
• A father who sacrificed his daughter to prove his faith in God and his followers who fully expected her to be raised on the third day (she wasn’t)
• A Sorbonne graduate student who killed and cannibalized the woman he loved and went on to become a bizarre media celebrity
• A 19th century serial killer who earned the title of “the worst woman in the world” by killing a series of husbands for profit
• The assassination attempt on John F. Kennedy you never heard about but which very nearly succeeded.
• George Stinney, the fourteen-year-old child who died in the electric chair for a crime he didn’t commit.
• Joseph Vacher, the “French Ripper” whose crimes shocked France but tried to blame it all on the rabid dog that bit him.
• How mob boss Vincent Gigante earned himself the nickname of “the Oddfather”
• Leonarda Cianciulli, the Corregio “Soapmaker” who killed three women as a sacrifice to protect her own children.

These stories, and more, are all featured here making this book a must for any connoisseur of true crime and bizarre justice. This 183-page collection of some the most amazing crimes HistoricalCrimeDetective has ever known is available on Amazon at $2.99 for Kindle, and just $7.62 for paperback. Click on the link below to purchase.

About the Author: Romeo Vitelli received his doctorate in Psychology from York University in Toronto, Ontario in 1987. He spent 15 years as a staff psychologist in Millbrook Correctional Centre, a maximum-security prison run by the Ontario government. In 2003, he went into full-time private practice and has been an avid blogger since 2007.