The Wrath of George Geschwendt and the Abt Family Ambush, Trevose, Pennsylvania, 1976.

Home | Short Feature Story | The Wrath of George Geschwendt and the Abt Family Ambush, Trevose, Pennsylvania, 1976. 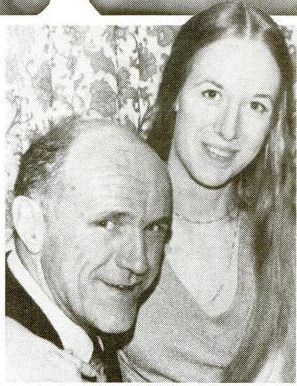 John Abt, with his daughter Margie.

When Michael Abt arrived at his family home in Trevose, Pennsylvania, he knew something was wrong. For a family of seven, the two-story house in the suburbs of Philadelphia (in Bensalem Township) had its own current of energy flowing through the walls, the floors, the ceiling and everything in between. But on Friday, March 12, 1976, the twenty-one-year-old couldn’t feel that energy, and as he looked around, he saw why.

“He saw blood stains and bloody rags and ran out of the house,” a United Press International report stated a few days later.

In the basement, Bensalem police found the bodies of six people, all shot once in the side of the head. Five of them were Michael’s family members; the sixth was the boyfriend of his sister. Alongside them lay the family dog, a friendly St. Bernard, also shot and killed.

The Abt family of Trevose was now reduced to two people: Michael, and his wayward brother Clifford, who was in jail on a forgery charge.

Three days into the investigation, the local police gave the standard “were tracking several leads” line, but before the interview was over, even they had to admit that “they did not know who shot the victims, and above all, they did not know why.”

But they did know one thing about the shooter; he was a very patient and determined man. This was no ‘burglary gone wrong scenario,’ it was a cold-blooded ambush. He had sat in the Abt family house for hours, calmly waiting for each family member to walk through the door so he could shoot them in the head. As he sat there, alone, he had hours to think about what he was going to do. He could have easily changed his mind and left.

But he never did.

The first two to die were Cathy, 15, and John Jr., 13, who arrived home from middle school just after three o’clock. He shot the two kids dead and carried them down to the basement, carefully laying their bodies next to the dog he had shot and killed after he broke into the house through the back door.

Two more hours went by until he shot his next victim, Margaret Abt, 46, an employee with the Internal Revenue Service. She arrived home from work about 5:15 p.m. A few minutes after she was killed, her daughter, nineteen-year-old Margie, arrived home from her job, walked through the front door, and was immediately shot in the head. Like the others.

Now, things were happening fast. The father would be home soon and the killer didn’t have time to carry the women downstairs. Instead, he dragged them to the top of the stairs by the back kitchen door and threw them down the steps.

Then, he wiped up the blood trails and waited.

Between 5:30 and 5:45, John, the devoted father and scoutmaster, arrived home from his job with the telephone company. He was shot as soon as he closed the front door.

Margie’s fiancé, Gary Engle, was the sixth and final victim. He was killed around six o’clock when he entered the house. He was there to celebrate the third anniversary of the first date they ever

Michael Abt pictured here during his 1991 interview.

What if a neighbor heard the shots and was calling to check on the family? he thought to himself.

Ten days later, police arrested Michael’s former childhood friend and neighbor, George Geschwendt. During their pre-teen and teen years, brothers Michael and Clifford were friends with George. Together, the three played pool, rode their bikes around town, and discovered the mischievous kind of trouble that boys their age, growing up in that era, could get into.

“We were real pains in the ass,” Michael said during a 1991 interview. “We were the best of friends.”

Maybe they were, maybe not.

The friendship broke apart after George was sent to juvenile court for vandalism. At the time, he was living with his mother, brother and abusive father who had tried to kill him on several occasions.

According to Michael’s 1991 interview, his mother forbade him from playing with George—fearing he would bring Michael down with him. Michael then claimed that for the next eight years, he and his brother, Clifford, never paid much attention to George, despite living diagonally across the street from each other.

Other reports of the friendship separation declare that Clifford and Michael bullied George by shooting BB guns at him and his house, sent unwanted flowers and taxicabs to his house, and for making fun of his mother who had a foreign accent. Of the two brothers, Clifford, the oldest, was reported to have bullied George the most.

Whether he felt bullied or betrayed by the Abt family in general, and Michael and Clifford in particular, George Geschwendt felt humiliated. His humiliation transformed to anger and a desire to set things right; to get revenge, and in his twenty-four-year-old mind, it was a justified revenge.

So George bought a pistol. He practiced with it. He set his mind to do it and on the morning of March 12, 1976, he put on rubber gloves, broke in through the back kitchen door of the Abt house, sat on the piano stool and waited.

He waited for six hours for the youngest of the family to come home from school.

By some twisted irony of life, the two he wanted to kill the most, were the two who got away. 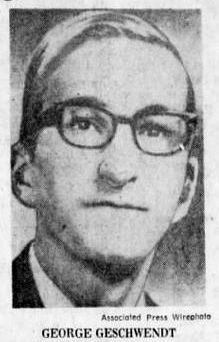 On March 22, ten days after the murder, George was brought in for questioning by Bensalem Township police. Children fishing in a nearby creek found the murder weapon, which was traced back to George. That night, he confessed to killing the Abt family, calling it a “personal vendetta.”

He would later proclaim his ambush on the Abt family his “only achievement in life.”

When brothers Michael and Clifford found out it was their neighbor, who lived ninety-feet away, they got into fist-fight with each other in front of a newspaper reporter. The cause of the fight between them wasn’t reported on, but the implied message that comes through is—blame.

Breaking it off, Michael then tried to storm the Geschwendt house but was tackled by a police officer just inside the yard.

“I’m gonna kill him when I get him,” Michael Abt said through a swollen mouth. “I haven’t talked to him in eight years. It was senseless.”

Michael described his former friend as “a loner,” and said he couldn’t think of a reason why George would want to kill his family. If he and Clifford bullied George, he never mentioned it. Instead, he only had negative things to say about his neighbor.

“He always stayed at home,” Michael told a reporter after he had calmed down from the fight. “He’s strange…a very strange dude. Very quiet and withdrawn. He never left the house, never dated girls.”

During his confession, George shared his feelings of Michael and Clifford. “I would have stayed until midnight to get the other two,” but the phone kept ringing. He feared someone might have heard the shots.

He pleaded not guilty by reason of insanity.

Tried in July on six counts of murder, a Bucks County jury found him guilty and he was sentenced to die in the electric chair. When Pennsylvania’s old death penalty laws were ruled unconstitutional in 1977, his death sentence was commuted to six consecutive life sentences.

By 1983, he had exhausted all of his appeals. However, in February 1991, one of his old appeal arguments took root with a new federal judge who ruled the trial judge erred when he refused to instruct the jurors that “they could find the unemployed landscaper not guilty by reason of insanity.”

Had the jurors known of that option, “there is at least a reasonable possibility . . . they would have returned a different verdict,” the federal judge wrote. On November 8 of that same year, a three-judge panel from the Third Circuit Court of Appeals ruled Geschwendt “should get a new trial or be released from prison.”

Disappointed county prosecutors appealed the three-judge panel decision to the full panel of judges. Following a second round of arguments in May 1992, the Third Circuit ruled against Geschwendt, reporting that the trial judge’s instructions for a third-degree murder conviction did in fact give sufficient allowance for his insanity claim.

After their family was murdered, brothers Michael and Clifford lost complete control over their lives. Clifford was in and out of jail over the next thirteen years. He died in August 1989 after suffering a bad reaction to an unspecified narcotic.

By 1991, Michael had lost his license, his job, any home he had, and during his Inquirer interview, was living in a motel with his pregnant girlfriend. For a ten-year period, he sold methamphetamines to make a living. During the interview, he claimed he was out of that business. In March of 1990, around the time of the fourteenth anniversary his family was murdered, Michael got drunk and crashed his 1972 Toyota in the back of two cars at an intersection. He was put on probation and ordered to pay $4,000 restitution.

They may not have been killed, but George’s actions led to their wrecked and wasted lives.

I could find no further information on Michael. According to a Topix internet discussion of the case, Clifford and Michael harassed and bullied George because they thought he was strange. It turns out George was a sensitive young boy whose father physically abused him (by 1950s and 60s standards) and tried to kill him on two occasions.

George, 64, is alive and serving out his life sentence at State Correctional Institution—Mahony, a medium security prison in Schuylkill County.

This is still a very sensitive case for many people from Bucks County, and evokes strong, emotional reactions from those who knew or were familiar with George Geschwendt, or the Abt family. Naturally, those connections produce a lot of thoughts and opinions about this case, which I am never going to go into. Every murder story I’ve ever written comes with an encyclopedia volume set of rumors and gossip and opinions. It’s normal. However, HCD is not a message board for rumors and gossip and opinions about old cases. Please don’t write to me about this tragic mass murder unless you have documented information. I’ve outlined the case above and believe it is a short but adequate report.