In early July of 1921, West Palm Beach Postmistress Lena Clarke embezzled $41,000 from two registered money bags that were being sent to the Federal Reserve by a local bank. On July 26, the money was discovered missing and one week later, Miss Clarke appeared at an Orlando, Florida, police station and told officers that the man who embezzled the money could be found at the San Juan Hotel. There, they discovered the body of Fred Miltmore who had been drugged and then shot in the head. They also found the two empty money bags which had been slashed open with a knife. 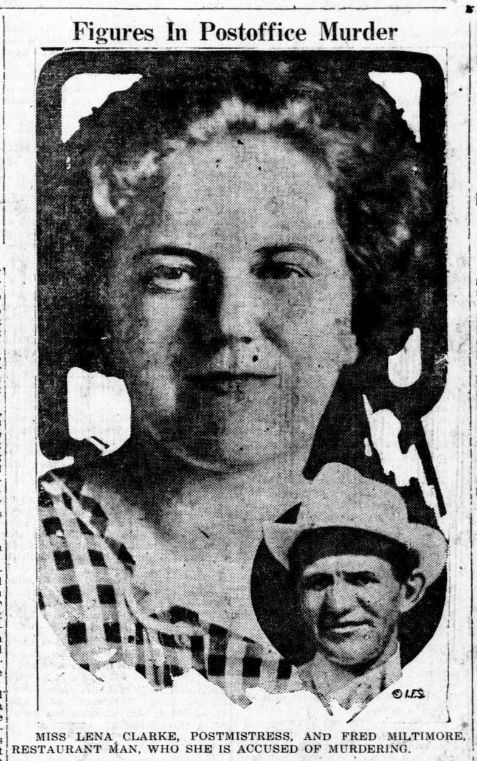 The Orlando officers then telephoned back to the police station that Miltmore had been murdered. The chief of police interrogated Clarke and after she made several bizarre statements regarding her predicament, she finally confessed to both the murder and the theft.

Her embezzlement of the money, she explained, was part of her effort to cover up her theft of registered bank money she had stolen in 1918, while she was then the assistant postmistress. During the investigation into that incident, Clarke had tried to cast suspicion Miltmore, who was also in line to become the postmaster. She eventually got the job instead. By then, Miltmore had already quit the post office and opened a restaurant. Before he left, he accused Clarke of stealing the money.

After many confessions which were all recanted, Clarke finally stated that she had followed Miltmore from West Palm Beach to Orlando and lured him up to her hotel room.

“I shot Miltmore—I did it after attempting to make him sign a statement that he had committed the robbery. He wouldn’t sign and in desperation, I shot him,” she told police.

During her time in jail, Clarke wrote and sent poetry and letters to her many supporters on a small typewriter she had been given by a friend. Although police investigated several prominent men from Florida to New York as possible accomplices, no connection could be established. In their early 20th Century minds, a woman could not pull-off a crime like this by herself. There had to have been a man helping her.

While in jail, Miss Clarke’s physical appearance and odd behavior as a “feminine Jekyll and Hyde” were noted by a newspaper writer.

Lena Mary Thankful Clarke, if you please, is a queer combination —a bundle of contradictions. In personal appearance and dress she is far from attractive. Her figure is heavy and uncorseted and her clothes smack of the backwoods.

Her shoes are generally without heels and her stockings of cotton. Her skin is very fine in texture but covered with large, disfiguring freckles. Miss Clarke’s only assets in appearance are her hair, which is decidedly Titian and naturally wavy, and her eyes, deep blue in color and absolutely straight and unwavering in their gaze.

She has cultivated a habit of a straight and steady look, believing a directness of gaze to a psychological winner in dealing with human nature.

Miss Clarke is a firm believer in the power of will. She informed the post office inspector when he confronted her with supposed knowledge that her shortage was known to him, that it was a question of his will against hers and that hers was the master mind, defying him to place the blame on her.

When asked about his daughter, Rev. T.A. Clarke of Atlanta, Georgio, declared: “The law of man may declare our daughter a robber and murderess. But in the sight of God and her aged father and mother, she is as innocent as a new-born babe.”

On December 3, 1921, after deliberating for just two hours, a Florida jury found Lena Mary Thankful Clarke not guilty of murder by reason of insanity and she was committed to an insane asylum. Her stay there appears to have been brief and by 1930, she was living with her sister, Maude, and eighty-eight-year-old mother, Marietta, at 414 Banyan Boulevard in West Palm Beach. Her occupation at that time appears to have been “nurse,” although the handwriting of the census official is barely legible. By 1940, Lena and Maude, both unmarried spinsters, were still living at the same address. By then, Lena’s occupation was listed as “writer.”

You can read more about Lena Clarke’s case by clicking on the links below: