Clyde Edward Laws and an associate, while escaping from the armed robbery of a supermarket in Montgomery County, Maryland, on February 8, 1967, were stopped by two Montgomery County police officers. A gun battle ensued and one officer was seriously wounded in the stomach with 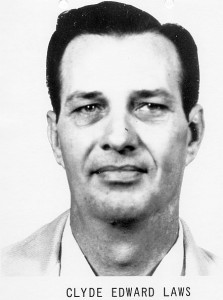 a shot fired by Laws. Laws was also believed to have been wounded in the thigh by one of the officer’s bullets.

Laws and his associate then carjacked a car driven by a soldier, abducted him, and drove to an amusement park where the soldier was released. The soldier’s car was abandoned a short distance away and the robbers continued their flight. They were known to have stayed in a motel in Fredericksburg, Virginia. Laws was believed to have lost a significant amount of blood, and investigation at the motel revealed that a large quantity of linens were taken, possibly used as bandages. Investigators also found a blood-soaked makeshift bandage and a bloody tourniquet at the motel.

Laws, who was from Missouri, was in frequent telephonic contact with former employers, associates, and relatives. In his telephone conversations, Laws would never indicate the location he was calling from, and there was no real purpose to the telephone calls other than just “small talk.” The person he most frequently contacted was a relative in Missouri, who was cooperating with the FBI.

Laws acknowledged that he, in fact, was in the area, so his relative expressed the desire to see him. Laws agreed to come to the house that evening at 10:00 p.m. He requested that all doors be locked with the exception of the back door to the house and that the lights be turned off. Prior to ending the call, the relative told Laws about his fear of weapons and asked that Laws come unarmed.

Laws’ relative immediately notified the FBI. Agents secured the house and moved the occupants to safety. At promptly 10:00 p.m., the back door of the house opened and Laws slipped into the dining room. He was immediately placed under arrest. Laws commented, “The one time I need my gun I don’t have it.”

He was tried for kidnapping in state court in Easton, Maryland, and on May 9, 1968, was found guilty and sentenced to 20 years in prison.