The Knight Falls: The Murder of Mrs. Langfeldt, 1896, San Francisco

There is a great link to an 1896 article from The San Francisco Call about the case at the end of the article.

Joseph Blanther was born in Rankerburg Steirmart, Austria, in 1859. When nineteen years of age he was made a Lieutenant in the Austrian army, and a few months later, on December 12, 1878, was knighted and decorated by Emperor Franz Josef for distinguished services in battle.

Because of some peculiar transaction he retired from the army and left his native land. He arrived in San Francisco on February 2, 1896, and took up lodgings at the residence of Mr. Hogan, at 222 Haight Street. He was a liberal spender among the fair-weather friends he chanced to meet, and delighted to maintain a show of wealth.

He had been living at the Hogan residence only a short while when he borrowed $15 from Miss Hogan, at the same time obtaining $9.70 from a Mrs. Gilbert, who lived in the same house. For security he gave both ladies worthless checks on the Columbia Bank.

About this time he met Mr. C. H. Tebbs, a newspaper artist. Blanther, who had done some writing for Harper’s, and the Argonaut, and Tebbs, became quite friendly, and Blanther borrowed Tebbs’ camera. When the artist asked him to return it, Blanther made so many excuses that the Harry Morse Detective Agency was finally employed to recover it. Captain Cullenden was assigned to the case, and obtained a confession from Blanther to the effect that he had pawned the camera to a broker on Kearney Street, where it was subsequently recovered.

As Blanther claimed that he was actually starving and was forced to raise the money, Tebbs declined to prosecute him.

In 1896 an aged and decrepit old lady named Mrs. Philipini Langfeldt occupied a room at the residence of Dr. Kleineburg, at 1225 Geary Street. She, like Blanther, also loved to create the impression that she possessed much wealth, and almost constantly wore five very valuable rings set with diamonds and pearls.

Blanther remained at the Hogan home but a short time, and after a brief trip to Portland took up his residence at the home of the widow of Detective James Handley, at 828 Geary Street, four blocks from the Langfeldt home. 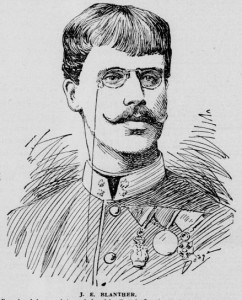 He learned of the “wealthy” old Langfeldt lady and obtained an introduction. Notwithstanding the great differences in their ages, he paid her marked attention and made a great display of his decorations, never missing an opportunity to tell of his hairbreadth escapes on the bloody battlefield, and incidentally to refer to the honors bestowed upon him by the Emperor.

On Friday, May 15, 1896, Mrs. Langfeldt told Mrs. Kleineburg that she expected Mr. Blanther to call that evening.

While no one saw Blanther enter the house, different members of the household heard some man laughing and talking with Mrs. Langfeldt in her apartments. This person arrived about 9 p. m., and Dr. Kleineburg heard him leave at 11:10 p.m.

At 9 a. m. on the following morning a domestic servant in the house named Susie Miller took a cup of coffee to Mrs. Langfeldt’s room, but as she received no response to her knocks at the door she notified Dr. Kleineburg.

Officer Thomas Atchison was called and he broke in the door. In the middle of the floor was the body of the old lady, her head almost severed from the body, evidently by a razor. As might be imagined, everything near the body was saturated with blood.

Captain of Detectives Lees was called and he found drops of blood in remote corners of the room, which convinced him that the assassin had probably cut one of his hands in cutting the old lady’s throat. The five rings which she wore were stripped from her fingers, and the apartments were rifled. Suspicion at once fell on Blanther.

Mrs. Handley, his landlady, was visited, and she stated that Blanther arrived home on the preceding evening at 11:20, ten minutes after Dr. Kleineburg heard Mrs. Langfeldt’s visitor leave. She stated that he went to the bathroom, and while she heard him leave the house on the following morning at 6 o’clock, an unusually early hour, he did not sleep in his bed during the night.

J. E. Lynch, a roomer in the same house, stated that he saw Blanther leave the bathroom about 11:30 on the preceding night, just as he entered it, and noticing crimsoned water in the bottom and on the sides of the basin he concluded that Blanther had a “nose bleed” or had cut his hand.

Architect George Dodge came forward and made a statement substantially as follows:

“I became acquainted with Blanther when he resided at Mr. Hogan’s home on Haight Street. I saw him on Friday evening, the night of the murder, and he was despondent. He informed me that he had just pawned his overcoat, and if he did not get some money somewhere he would commit suicide.

“On the following morning he appeared at my office at 9 o’clock, an unusually early hour, and pretended to be in high spirits. He seldom wore gloves, but on this morning he wore a maroon colored glove on his left hand, even while rolling a cigarette.

“Many weeks ago Blanther told me that while at the racetrack one day he met a lady named Mrs. Genevieve Marks, who resided with a Mrs. King, at 427 O’Farrell Street. He said that this lady had valuable diamonds upon which she desired to borrow some money, and he asked me if I could procure a loan on them. I replied that I thought I could, but that I would require a written authorization from Mrs. Marks.

“On Saturday morning he delivered two unset diamonds to me with the following note:

‘Mr. J. Blanther: I hereby authorize you to borrow money on collateral security given to you by me, consisting of diamonds.   — GENEVIEVE MARKS.’

“After reading the letter of authorization I felt reassured and returned it to Blanther. I then went with Blanther to a money lender named Henry Lacey, who loaned me $100 on the stones.

“Blanther did not enter Lacey’s office, but remained outside. As I had business in Alameda, and as Blanther told me that he was going to Oakland, thence to San Jose to meet Mrs. Marks, we rode across the bay together.

“As he pulled out several cigars during the morning I playfully opened his coat and looking at the pocket where the cigars were kept, I laughingly said : ‘You must have beat the slot machines.’ When I opened his coat I noticed a razor in the pocket with the cigars. I now recall that Blanther did not appreciate my little joke.

“He left the local train at Seventh and Broadway streets, and said he would see me the next evening.”

Mrs. Marks made a statement substantially as follows :

“It is true that I know Blanther, and he called at my home many times. I have several diamonds, and Blanther annoyed me with the interest he took in them and the questions he asked regarding their value.

“The man became obnoxious to me, so I suggested to him that it would be better if he ceased to call, and I notified Mrs. King, my landlady, that thereafter I was not at home if Mr. Blanther called.

“I have not seen him for weeks, and yesterday, the day I was alleged to have made an appointment for a meeting at San Jose, I was sick in bed at home.

“I never asked Blanther to hypothecate any diamonds for me nor did he ever have any of my jewelry in his possession.”

Henry Lacey, the money lender, was interrogated, and he produced the diamonds received by him from Mr. Dodge.

Mrs. Kleineburg identified them as being exactly the same as those in Mrs. Langfeldt’s rings.

Francis Korbel, the Austrian Consul, was called in to examine Blanther’s medals, decorations and papers, and he stated that they were undoubtedly genuine and added that Blanther was not only an officer in the Austrian army, but a Knight in several imperial orders.

Captain Lees had positive information that Blanther boarded train No. 19, bound for Los Angeles, which left Sixteenth Street, Oakland, at 5:30 p. m., on the day the body was found. Blanther purchased a ticket to Martinez on the train, but when he reached Port Costa he purchased a ticket to Los Angeles, and continued his journey on the same train. He attracted general attention because of the fact that he wore maroon colored gloves at all times, even when eating his meals.

Captain Lees telegraphed to the Los Angeles authorities to apprehend him at the train, but through some misunderstanding the officer arrived ten minutes too late.

It was subsequently learned that Blanther procured the ticket under the name of Forbes.

Captain Lees then decided to flood the country with circulars containing a picture of Blanther, but only two pictures of the fugitive could be found. One was taken in his military regalia when he was scarcely a man, and while the other picture, which was unmounted, had been a good likeness, it had faded so that it was useless for copying purposes. It was turned over to Theodore Kytka, the handwriting expert, who observed that it was printed on solio paper. As this kind of paper had only been in use for this purpose for two years, it was easy to conclude that the picture had been taken within that time. Because of the modeling of the shadows on the face, Kytka concluded that it was printed in some well-equipped gallery. He obtained Captain Lees’ consent to communicate with the police departments and the Pinkerton agencies throughout America, who were requested to visit all photograph galleries and ascertain if Blanther or “Forbes” had within the last two years sat for a picture, and if so to procure the negative.

The Pinkerton agency located the negative in Brand’s gallery in Chicago, and it was forwarded to Kytka, who removed the retouching, to make the picture look as natural as possible.

A good picture and description of the fugitive was then sent to the Chicago Detective, a paper of wide circulation, with instructions to publish the same.

On March 2, 1898, the county assessor came into the sheriff’s office in a little town in Texas and saw Blanther’s picture, taken from the Chicago Detective, pasted on the wall.

He said: “Hello, who is this?” The sheriff gave him the desired information. The assessor then said: “Well, if that ain’t the picture of Archibald Forbes our schoolmaster over at Koppearl, I am very much mistaken.”

The more he studied the picture the more convinced he became. Finally he persuaded the sheriff to accompany him to the school.

After interrogating “Forbes” the sheriff decided to take him into custody. As he did so the schoolmaster attempted to draw a pistol, but he was overpowered and placed in the jail at Meridian, Texas, pending a further examination, which proved conclusively that he was Blanther.

Detective Ed. Gibson was sent after him, but Blanther had probably been prepared for nearly two years for such an occasion, as he had cyanide of potassium concealed under the band of his hat, and the jailers found him dead in his cell.