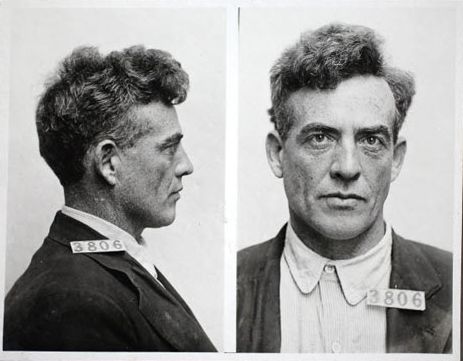 Roy G. Gardner (January 5, 1884 – January 10, 1940) was once America’s most celebrated outlaw and escaped convict during the Roaring Twenties.

During his criminal career, he stole over $350,000 in cash and securities. He also had a $5,000 reward placed on his head three times in less than a year during his sensational career. He was the most dangerous inmate in the history of Atlanta Prison and he was dubbed by the newspapers across the West Coast as the “Smiling Bandit”, the “Mail Train Bandit”, and the “King of the Escape Artists.” He was one of the most notorious offenders within the Federal Bureau of Prison system, one of the most notorious inmates at Alcatraz and one of the most ruthless criminals in American history.

Gardner is said to be the most hunted man in Pacific Coast history. While legend has it that he was the first to escape the McNeil Island Federal Penitentiary, this has been confirmed to be not true. The first escapes from McNeil Island occurred before Gardner was even born, and, by the time of his imprisonment, several dozen inmates had made their escapes. McNeil Island, in fact, was the only Federal Penitentiary never to have a wall and was never considered a maximum security facility.

Gardner was the “Most Wanted” gangster of 1921.

He is now largely forgotten for his daring acts. No longer the household name that he was in 1921, he never lived as an outlaw on the Western frontier, was never a Depression Era gangster, and was never in a gang, all things that may contribute to him being largely forgotten in modern times. He was a lone wolf and his reputation and notoriety made him a touchstone of his time.

Gardner published his autobiography, “Hellcatraz”, a sensational book that contains not only descriptions of his interesting life but also such familiar names as Al Capone. He attended crime lectures, and he and Louis Sonney made one of the first re-enactments on a short film called, “You Can’t Beat the Rap”. The ex-convict landed a job as a film salesman and an exposition barker. A 1939 movie called “I Stole A Billion” was based on his life. The movie was a failure.

On the evening of January 10, 1940, Gardner wrote four notes at his hotel room in San Francisco, one of which was attached to the door warning: “Do not open door. Poison gas. Call police.” He sealed the door from the inside, then killed himself by dropping cyanide into a glass of acid and inhaling the poison fumes.