The Mass Murder of Six People in a Washington Cottage

ON A SATURDAY in March 1934, Tom Sanders stepped out of his Erland Point, Washington cottage and glanced around. He had been annoyed by the howling of dogs nearby. The mournful cries came from the Flieder cottage, a short distance away. Here he went, and to his surprise, discovered that the howling came from a large sedan parked in the rear of the cottage. There were three white poodles and when he opened the door they leaped at him with frantic gestures of joy.

Sanders glanced at the house and though the day was cold, no smoke came from the chimney; the blinds were all down but not all the way. The powerful beam of his searchlight cut through the darkness and he saw a card table and chairs. Then he recoiled in horror. Sprawled on the floor on either side of the table, were two bodies—those of a man and a woman. Sanders hurriedly phoned the authorities, and 10 minutes later Kitsap County under-sheriff Rush Blankership and another officer appeared.

The officers were aghast at what they found. Not only were the bodies of Mr. and Mrs. Flieder discovered but four more still forms —Mr. and Mrs. Chenovert, Bert Balcom and a Mr. Jordan. All the victims had been well-known locally and they all lay dead—murdered. Bullet wounds and heads bashed in with a bloody hammer found on the floor gave a clear picture of how the crimes had been accomplished. Marks on the woman’s fingers, empty pocket books and wallets gave the motive of the brutal murders—robbery.

A HUGE dragnet was thrown out at once. Orders were issued immediately to bring in anyone showing signs of being in a struggle or whose clothes appeared to be bloodstained. Results from this widespread move came almost immediately. A dozen suspects were brought in for questioning, but in every instance they were able to prove either that their wounds had been incurred prior to that fatal evening in March, or could give a satisfactory explanation for them.

Meanwhile, an autopsy had been performed on the bodies. In every ease where the victims had died immediately, the killer had made sure he would not testify against them by deliberately cutting their throats. Public indignation rose to fever heat and the authorities redoubled their efforts to locate the slayers.

Weeks, months passed, and as the killers’ trail grew cold it began to look as if Washington’s most sensational crime would never be solved. And so it might have been—except for one thing: the magnitude of the crime. Thus it was in January, 1935 when William Severyns became the new sheriff, and one of his first official acts was to call in his chief criminal deputy, 0. K. Bodia, and instruct him to work on the case. It was a tough assignment and Bodia knew it. The best detectives in the Northwest had worked for months and failed. Nevertheless, he eagerly tackled the job.

Dropping into a beer parlor in downtown Seattle one afternoon in early September, he noticed two men in earnest conversation. Suddenly he heard a reference made to the killing and a man’s name mentioned several times, with his address. The man was Leo Hall, 710 Columbia Street. Making quiet inquiries he learned that there were three brothers, Leo, Gus and Bob: Leo was the oldest, 33: then came Gus, 26, and last Bob, several years younger than Gus. As it turned out, Leo had disappeared and could not be found. 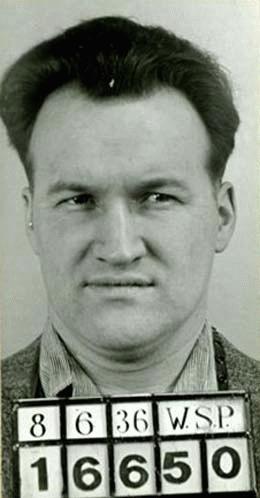 The deputy’s suspicions were now fully aroused and he determined to probe the man’s history thoroughly. Going through police records, he found that back in 1932, Leo Hall bad been arrested for automobile theft and that while trying to escape had been shot by an officer. The wound had proved almost fatal and because of that fact, and his youth, he had been given a suspended sentence. He learned also that Hall had been quite friendly with a bootlegger than held in the county jail on grand larceny charges.

Bodia next visited the “pal,” Larry Paulus, and then casually mentioned Hall.

As the name dropped from the deputy’s lips, Paulus stiffened and his face became grim. “A swell pal he turned out to be,” he sneered. “First he promises me smokes that never come and then while I’m tight in stir, he runs out with my wife. But he better watch his step—I’ve got enough on him to burn him, plenty.”

Carefully hiding his elation, the deputy prodded him on and on. The convict required little prodding. “I’m talking of those six killings,” he stated. “If you want to learn more you’ll have to ask my wife. I heard her talk of it in her sleep and she mentioned Hall’s name.”

But the fugitive proved as elusive as an eel. As for Peggy Paulos it did not take much pressure to make her open up, and then with a dramatic suddenness that cracked like a whiplash, came the announcement: Peggy Paulos had confessed. The sensational case was at last broken wide open! The news was carefully suppressed from the public and the hunt for Hall pushed with redoubled vigor and another break in the case came.

A man walked into police headquarters in Portland, OR and asked to see Captain Keegan. He said he had recently invented a new automobile carburetor. Needing capital to finance the device, he met a Mr. Stuart, who claimed to have plenty of money. Stuart had immediately professed a great interest in the invention and asked for a demonstration. But when they started out, instead of wanting to drive over the regular highways, he had insisted that they turn into unfrequented roads. This fact and something in Stuart’s manner caused the inventor to fear that the man was intending to kill him and take his car.

Assuring the man that he would be protected, Keegan told him to arrange another appointment with Stuart at the same place the following day. This was arranged and when the man stepped up to join him, Detectives Malchorn and Eichenberger sprang out of concealment and seized him.

Deputy Bodia left immediately for Portland and returned with the prisoner who refused to admit his guilt. Betty Burns was once more picked up and asked to repeat her story. Under the guidance of Detective Captain Yoris she began her confession, one of the most extraordinary ever filed among criminal records. It was a story of how one man, with only a woman’s assistance had held up and later had taken the lives of six human beings.

Haltingly, in a low voice, she told of mentioning to Hall that the Flieders had money. He suggested they rob them. Thinking it a joke, she had agreed to meet him downtown the following day, but when he went to his safe deposit box and took out a pistol and a hammer, she became frightened and tried to draw back, but Hall wouldn’t listen.

He had forced her to accompany him and again and again he threatened.

Here, as she told of entering the house and began to approach the dreadful events that later transpired there, it became apparent she was nearing a breakdown. Haltingly, she had managed to describe how they had bound the victims and searched them, but as she came to the point when Hall had begun killing them in cold blood, she broke down completely. Sobbing wildly, hands pressed tight over her eyes as if to shut out that horrible vision, she cried again and again.

“Oh, it was terrible—terrible! I didn’t know what to do. I ran out and he shot at me.”

Since that moment, she said, she had lived in agony. A week later Hail located her and warned her that if she breathed a word of what had happened that night he would kill her, too. Tortured by her conscience on one hand and fear of Hall on the other, she had remained silent until she could do so no longer—until she had either talk or go mad.

On December 9, 1935 the pair faced trial. The jury deliberations were brief. Only one ballot was required to reach a decision: Betty Burns was acquitted and Leo Hall was found guilty of first degree murder, with recommendations that he receive the death penalty.

Three days later, Hall appeared in court with his counsel to ask for a new trial. It was refused and after Superior Judge H. G. Sutton had pronounced sentence, death by hanging, the veteran jurist remarked: -“The evidence in this case was the strongest and most conclusive I have ever listened to.”

Hall heard the sentence calmly, displaying the same stoical indifference he had exhibited alt during the trial.  He was executed by hanging on Sept. 11, 1936.