Home | Feature Stories | Inside a 1939 Execution 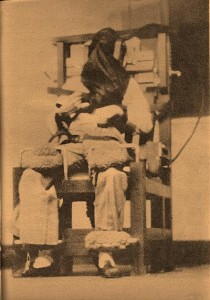 It was a bright moonlight night. I was 22, and, as I cruised out the Wetumpka Highway in the new family car, I clicked on the radio. Kay Kyser was playing Stardust. I had a heavy date—to see four men die.

“Want to go to a barbecue?” my city editor had asked me that morning. “If nobody else wants to,” I’d said, trying to look as grave and reluctant as possible, but inside I was elated. By “barbecue” the editor meant an electrocution at Kilby Prison a few miles from Montgomery—and this one was going to be the second largest execution in the history of Alabama.

Millions of people would like to witness an execution if given the chance—or they think they would. This was my chance. The assignment meant I had arrived as a full-fledged reporter, no longer to be considered a cub, but driving out to Kilby on the night of June 8, 1939, I was worried about how I would react to the legal, scientific killing of four men. Some reporters got sick at electrocutions; some fainted.

“This your first barbecue?” asked George Meeker, the police reporter for the opposition paper, who was riding out with me. It was an embarrassing and unfair question, I thought, but I had to answer, “Yes.”

“Then you’d better have a slug of this,” said Meeker as we parked beside Kilby’s high, white wall. He held out half a pint of bourbon. “You’ll probably need it.”

I declined, but watching Meeker, two years older than I, take several long belts of raw whisky to fortify himself made me more uneasy. I began to wish our midnight party was over.

Click Here to Read the Rest of the Story