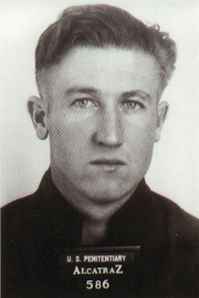 After a wild crime spree of robbery and kidnapping in 1942, escaped San Quentin prisoner Jim Quillen was sentenced to 45 years and sent to Alcatraz on Aug. 28 where he became prisoner #586.

When he arrived on Alcatraz, he was an angry and bitter young man with a “maladjusted attitude.” He grew up never really knowing his mother and after a prison minister tracked her down, only to discover that she had died recently and was buried in a pauper’s grave, something changed in Quillen. With no hope of ever getting free, he began a rigorous course toward self-improvement. His attitude changed 180 degrees and he began working in the prison hospital where he sought and received training as a radiology technician.

He was transferred to San Quentin in 1952 where he became a certified radiology technician. He was eventually released and although he steered clear of crime, his personal life was a roller coaster for many years. Eventually, he met the right woman and had daughter.

In 1991 he published his memoirs, Alcatraz from the Inside, 1942-1952. His bitter attitude toward authority and seeming disapproval toward prison officials, who were merely doing their jobs according to 1940s standards, comes through in the book and was noted by book critics.

Quotes from his record before his reformation: “Subject is impulsive and seems to think himself a “Big Shot” because of his long sentence.” “Subject is a Bitter Youth” with a “Maladjusted Attitude”.

From Publisher’s Weekly, 1991: Quillen’s autobiography focuses on his decade-long incarceration at the “Rock,” the former federal prison on Alcatraz Island, Calif., including the 1946 escape attempt that left several inmates and guards dead. Arguing that the brutality of the system made the bloodshed inevitable, he calls Alcatraz “a prison where the sole purpose was to degrade, deprive, humiliate and break the inmates.”

But Quillen never proves his case; most of his anger arises from the constant surveillance and security that made escape virtually impossible. Indeed, what comes through the author’s deliberately low-key account is the fervor with which he thought about, dreamed about and planned escapes. A veteran of two escapes from a state reformatory as well as one from San Quentin prison (during which he kidnapped two hostages), Quillen did try to escape from Alcatraz.

Most readers will find it hard to empathize with his complaints of overly restrictive security given that record. Ultimately, however, the details of life inside jail are more intriguing than the failed attempt to blame the system. Those details, and the story of Quillen’s eventual rehabilitation after release, redeem the book.