Home | Feature Stories | The Fate of the Bender Family, 1873

Editor’s Note: The Bloody Benders were a family of serial killers who lived and operated in Labette County, Kansas, between 1871 and 1873. Nearly a dozen travelers who stopped at their small inn were murdered, and their bodies later found buried on the Benders’ property. The family of four disappeared before they could be arrested. Over the years, a dozen different accounts of their fate were theorized or told. The story below—that they were killed soon after they were suspected in the disappearances of eleven people—is just one of those accounts, but this one comes from one anonymous source, and two deathbed confessions by individuals who said they were involved in the interrogation and execution of all four Bender family members. It was written and published in an obscure true crime magazine in 1951.

WHEN Osage Township began seriously to worry, about March 1, 1873, over vanishing travelers on the road from Fort Scott on the Missouri line to Independence deep toward the Indian nations, those travelers had been vanishing for about two years. One more was still to vanish, before Kansas and the world would know how these disappearances had come to pass. 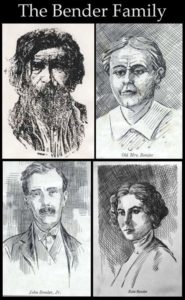 In those days news did not travel fast or far, especially news about lost strangers nobody expected to meet, anyway. People were too busy settling.

First there was only a trail leading southwest into Kansas, bitten through the buffalo grass by heavy-rimmed, ox-drawn wheels. As the Civil War spent itself and a new impulse of settlement strove that way, the trail was hardened and widened by much travel into a highway. Wagonloads of settlers trundled in. Here and there on the treeless plain sprang up farmsteads, relieving a monotony hitherto broken only by occasional meager creeks, small knolls, or willow and cottonwood scrub. Osage Township in Labette County, just east of the new village of Cherryvale, was distinguished from the rest of the developing country only by the faint color and flavor of mystery.

Many of the sunburnt farmers had served in the Union Army. Their women were plain and industrious, their children shock-headed, barelegged, shrill. These people built their own houses, butchered and smoked their own meat, ground their own flour from their own grain, sewed their own clothing and cobbled their own shoes. They had no theaters, no libraries. Occasionally there was a barn-raising, a revival meeting, a spelling school. Neighbors made much of every trifle of entertainment and sociability.

Leroy Dick was Osage Township Trustee. Among his neighbors were Rudolph Brockman, bluff, jovial and Teutonic; Silas Toles, of shrewd Yankee stock; George Frye and Thomas Jeans, modest and laconic farmers; Maurice Sparks, whose quick temper sometimes fulfilled the implication of his name; and the Bender family, whose roadside home did duty as store, restaurant, and hotel.