The False Confession of a “Mercy Killer” Nurse

The nurse, Marie Simone Sevigny, 26, who had been attending the victim from Dec. 2 until her death, was arrested and will be arraigned tomorrow on a murder charge, authorities said.

Later, authorities disclosed that for three months prior to Dec. 2, the same nurse had attended a Mrs. Frank Prince of East Douglas, Mass., who died December 1, reportedly of diabetes and tuberculosis. Massachusetts state-police hurried here to question, Miss Sevigny regarding her connection with Mrs. Prince’s case.

Miss Sevigny, according to police, confessed she gave Mrs. Normandin an ammonia solution because she allegedly wanted to put the patient out of her suffering and because she “considered it a merciful thing to do.”

Authorities said alienists [an old word for psychiatrist] would examine the nurse to establish her sanity.

The nurse had been held for questioning while medical authorities performed an autopsy on the body of Mrs. Normandin, which was exhumed late today after Mr. Normandin became suspicious of circumstances surrounding his wife’s death.

Police said that shortly before her death, the victim was found moaning and in semi-conscious condition by a son who had returned from school.

They revealed that a partly filled bottle of ammonia was found behind a radiator in an adjoining room. In the death certificate, Dr. S. Edgar Tanguay, Woonsocket medical examiner, had reported that Mrs. Normandin’s death was “due to drinking of a solution containing ammonia, causing a lung congestion which brought on death apparently suicide.”

Normandin became suspicious, it was said, because he claimed his wife never had talked of death nor hinted suicide.

Physicians said Mrs. Normandin had been suffering from a natural illness common to women of her approximate age. 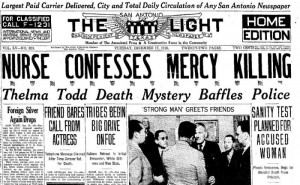 Big Headlines Appeared In Newspapers Across the Country. The story of the mercy killing nurse was even bigger than a story on actress Thelma Todd.

While she was on the verge of collapsed and unable to appear in court a plea of not guilty was entered today for Marie Sevigny, 26, dark-eyed practical nurse charged with administering a lethal dose to a patient under her care,

Having confessed, according to police who subjected her to a two day grilling, that she mixed a deadly potion for Mrs. Valmore Normandin, 47-year-old wife of a former city auditor, Miss Sevigny was almost carried into the courthouse,

Police Surgeon Myers, called to examine her, said her pulse was so weak she could not be given a stimulant nor permitted to face regular arraignment.

Attorney Louis Galberg entered the plea to a charge of murder. Henry A. Roberge, clerk of courts, accepted the plea and Dec. 27 was set as the date of hearing.

Miss Sevigny was ordered committed to the Providence County jail at Cranston.

The officer said the other deaths to be investigated had occurred in families in this city and In East Douglas, Mass., where Miss Sevigny had been employed.

The nurse, according to Crowley, had clippings and a snapshot pictured of the four persons who died, and pictures of members of other households where she had worked. Quoting her confession, Crowley said Miss Sevigny admitted administering knowing the fluid would kill Mrs. Normandin.

Asked why she had administered the dose, Crowley said she replied to ‘calm her down.” Later, he said, she explained to “take her sat of her suffering.”

Reclining on a couch in an ante-room of Twelfth District court, Miss Marie Simone Sevigny, 26, unregistered nurse, today was formally charged with the ammonia “mercy killing” of one of her patients, Mrs, J. Valmore Normandin, 45, wife of an auditor of the division of intoxicating beverages.

Asked to plead, the defendant, who had cried for a “mercy killing” for herself, moved her lips with the words “not guilty.” She sank into the arms of the police matron, Mrs. Lydia Young.

Miss Sevigny, suspected by police of being a second Jane Toppan, ,who in 1901 while morbidly Insane allegedly killed 31 patients in Rhode Island, Massachusetts and New Hampshire, was removed to the state institution at Cranston, to be examined by alienists.

Extra guards were posted at the cell of the nurse to balk any possible suicide attempt.

One of her sisters is an inmate of the state hospital at Concord, N. H., and another sister died there a year ago.

”I killed her because I couldn’t bear to watch her awful suffering and I wanted to help her.” That, according to police, was the reason the nurse gave for administering ammonia to Mrs. Normandin, sufferer from nervous trouble.

Other death cases being investigated were those of Mrs. Arthur Genlinas, Mrs. Jacob Kane and Mrs. Prank Lancot, all of this city.

Massachusetts authorities were probing the death of Mrs. Frank Prince, of East Douglas, Mass. Police said Miss Sevigny was nurse in these cases. The bodies of the Woonsocket women will be exhumed.

Miss Sevigny, accused of killing Mrs. J. Velmore Normandin, 47, of Woonsocket with poison, was to have appeared in court at Woonsocket tomorrow. Attorney General John E. Donley reported he had not completed his examination of the nurse.

Note: According to the newspaper archive database I used in this case, the following Associated Press story only appeared in two newspapers.

A grand Jury here today refused to charge a dark-eyed young nurse with the murder of her patient.

Police Inspector Leo Vanasse, of Woonsocket, announced a month ago that the nurse, 26 year-old Marie Sevigny told him she administered a caustic agent to Mrs. L. Valmore Normandin, 47, to end her suffering.

The grand jurors said that, in their opinion, the patient, Mrs. Normandin, wife of an auditor for the state alcoholic beverage commission died Dec. 11 of poison which she administered to herself.

And the jurors had this to say regarding the police:

“Apparently proceeding on a premise that there was no question about Miss Sevigny’s guilt, they did not bother to find out whether or not there was any testimony other than that used to build up their own case.

“We deplore the fact that the young woman, whom we all believed to be innocent of any criminal action, has been branded by sensation-seeking newspapers and a careless police department as a murderer.

“We believe that, the methods to gain her ‘confession’ should be not part of the procedure of a civilized police department in these days and we hope that our long and carefully considered action in thus freeing Miss Sevigny from the stigma attached to her, may, in part, at least, bring about a favorable reaction from the public.

The Rhode Island General Court was asked today to compensate Marie Sevigny, formerly of Manchester, NH, in the amount of $5,000 “for damages arising from her false arrest and incarceration” in connection with the death in December of Mrs. J.V. Normandin. Miss Sevigny, a practical nurse, was exonerated last week by a grand jury.