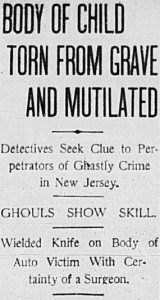 Like many of the stories I run across, I cringe when I read them because they just seem too  ghoulish or graphic. But then I think, ‘well, this is the way it was and it’s better to be honest with this history than hide it.’ That’s how I came to decide to post this story. As gruesome as this story is, we also have to think in the context of the times since there were no plastic anatomical models, and very few donations made available from local morgues. There were several good anatomy books available, like “Gray’s Anatomy of the Human Body” with colored illustrations, but that was for adults.  It’s apparent from this story that medical students studying pediatrics were DESPERATE. If this work was NOT done by medical students, well, then the whole thing is just something that can hardly be imagined.

[August 26, 1907, New Jersey] Detectives are working on several theories today with a view to discovering the fiends who desecrated the grave of little Margaret Kuhlewind, eight years old, in the cemetery at Bernardsville, New Jersey and mutilated the body.

The child was killed Aug. 14 in an automobile accident when Grant Schley’s machine, which had been taken out without its owner’s consent by Thomas Clarke, the chauffeur, collided with a pole and killed the child and Clarke and badly injured three others.

A few hours after the burial the grave was opened, the coffin forced out and the body taken out and horribly mutilated. Thrown back into the casket without even smoothing the shroud over the mutilated body, the coffin was lowered into the grave and the dirt hastily piled back.

The police believe that more than one (person) took part in the ghoulish work and lean to the theory that medical students did it. 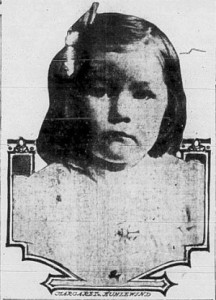 Margaret was buried on the afternoon of Aug. 17 in the cemetery of St. Bernard’s Episcopal Church, which has a wealthy and fashionable congregation at this season. The cemetery’s superintendent banked on her grave the many floral designs that were sent so the highest pieces were at the head of the grave.

The day after the funeral the superintendent saw that the flowers had been disarranged. Investigation showed that the grave had been tampered with.

He (the cemetery caretaker) summoned William L Bonfield, one of the church’s Cemetery Committee, who agreed that an attempt at least had been made to open the grave. But they decided before going further to await the return to his residence at Bernarndsville of Richard V. Lindabury, a leader of the New Jersey bar, who is chairman of St Bernard’s Cemetery

Mr. Lindabury returned Saturday and Margaret’s grave was opened in the presence of her father, Mr. Mr. Bonfield and Isaiah Power, the undertaker who prepared the body for burial.

The girl’s body was curled at the foot of the casket. Plainly, when the coffin was put in the grave again, it was lowered foot first. There were unmistakable signs that the body had been placed on the casket lid, which was used as an extemporized dissecting table.

The burial clothes had been ripped open in front with a very sharp knife which, it seemed, was in the hand of a man who has knowledge of anatomy.

When the body was returned to the coffin not even an attempt was made to smooth the disordered garments.

Will Hunt Them Down

Mr. Lindabury said today that neither effort nor money would be spared to apprehend the perpetrator.

As no medical men were present when the body was disinterred, it is probable that an examination will be made by physicians for the purpose of having expert testimony in case the culprits are caught.

It is reported that two medical students from New York or Philadelphia were boarding near Bernardsville at the time of the accident and that when they left one carried a mysterious looking jar. The police are believed to be seeking them to ask a few questions.