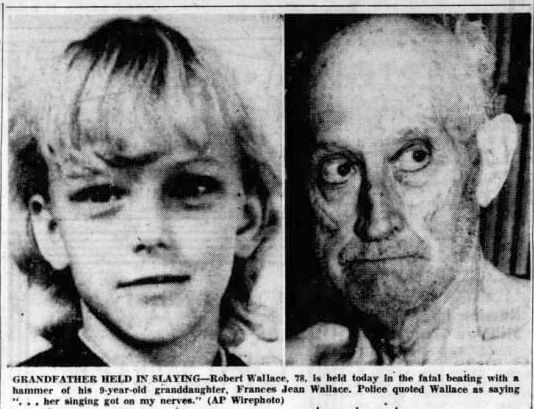 Child is Slain by her Grandfather: Singing Kept him Awake

August 25, 1955, TEXAS CITY , United Press— A preliminary hearing was scheduled Thursday for Robert J. Wallace, 78, who is charged with beating his blonde, nine-year-old granddaughter to death with a ball-peen hammer because her singing kept him from taking a nap.

Wallace, charged with murder with malice aforethought, was being held in the Texas City jail.

The victim, Frances Jean Wallace, died in her home Wednesday from numerous blows on the head with the heavy hammer.

Her father, G. W. Wallace, was at work at a Texas City refinery and her mother was working at a supermarket when Frances was killed. Wallace, who had lived with his son and his family for 14 years, was calmly rocking in a chair three or four feet from the body when police arrived.

Wallace told Assistant District Attorney Archie Alexander he was trying to take a nap but Frances’ singing kept him from going to sleep. Police said she was sitting at a table coloring a paint book when she was attacked. The book was open and her colors were scattered about it.

In a statement made to police, Wallace said he went into the kitchen, drank a glass of milk, and got the three-quarter pound hammer from a tool box. He said he returned to the living room and started hitting Frances on the head. She fell to the floor after several blows and Wallace said he dragged her body to the center of the room “so I could get a full swing.”

“I hit her in the head with a hammer about 20 times,” Wallace said.

Frances’ sister, Glenda Faye Wallace, 13, was outside the house playing when she heard the commotion and ran into the house. She saw her little sister lying on the floor, her head covered with blood.

Glenda Faye ran screaming from the house and across the street to the home of a neighbor. Mrs. Gay Archer, and told her: “Grandpa has hurt Frances.”

Mrs. Archer ran across to the house and found the grandfather rocking in his chair near the body. She asked him what happened and he replied:

“Nothing, I just killed her.”

The little girl’s mother had to be hospitalized for shock when she learned of the slaying.

The story below is the last one I could find about Wallace. A sanity hearing before a trial was his next step and if the story thread drops off here, he was either committed to a mental hospital, or, less likely, he accepted a plea deal.

Waives Hearing On Charge of Murder

Robert J. Wallace, 78-year-old hammer-slayer of his nine-year-old granddaughter, has waived preliminary hearing on a charge of murder.

Examining trial for the aged man who has been kept in a padded cell in Galveston County jail since the slaying last week was to have been held before Justice of the Peace O. P. Redell Monday. Assistant Dist. Attorney Andrew Baker asked Wallace if he was willing to waive the hearing to send the case directly to the grand jury. Wallace agreed with a nod of his head.

District Attorney Marsene Johnson. Jr., said Wallace will be given a sanity hearing before October, in time for the murder easy to go to the October term grand jury if Wallace is found sane.

Wallace has admitted killing the child because her singing and childish pratter irritated him while he was trying to take a nap.