On the morning of Jan. 15, 1944, in a small shack at the back of the Dillon Sign Shop at E1806 Sprague, police inspected a gruesome murder scene. 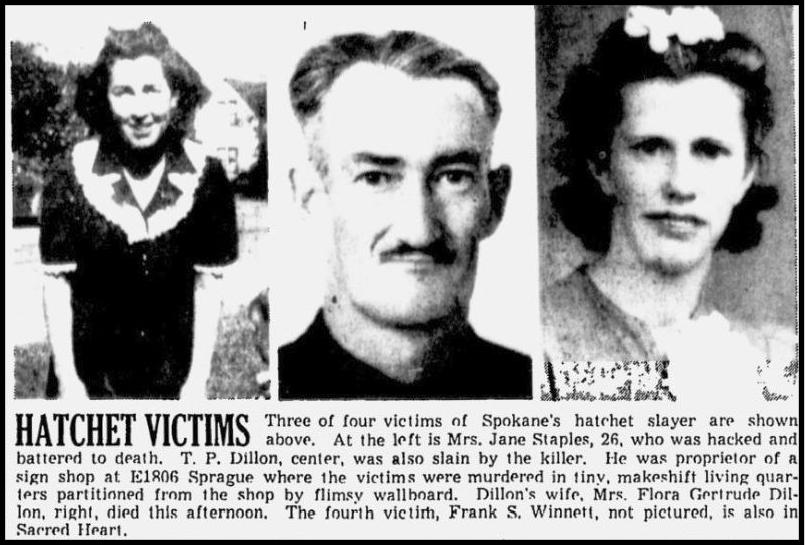 At first, authorities focused their attention on Staples’ husband, Charles. There was evidence she frequently had been unfaithful to him. He was identified by County Prosecuting Attorney Leslie Carroll as “the coldest-blooded man I have ever met in my years in the prosecutor’s office.”

Carroll also said Charles Staples was known to authorities as a communist. And when police picked up Staples to question him, the county attorney said he had blood on his shoes.

Carroll said it was the opinion of everyone investigating the case that “this was the crime of an outraged husband.”

But all other suspects were forgotten after Whitey Clark was arrested and signed a confession. Clark later said he had signed the confession only after a grueling all-night interrogation session in which the prosecutor and police threatened him.

The prosecution’s account was that Clark met the Dillons and Jane Staples at a tavern the evening before the murders. The Dillons and Staples had been drinking heavily, and T P. Dillion invited everyone in the place to his house for a party.

Clark was among the crowd who went along.

The party broke up a little before 4 a.m., with everyone leaving except the Dillons, Staples, Winnett, and Clark. Earlier in the evening, angered by advances made toward his wife, Dillon had threatened Clark with a pistol. 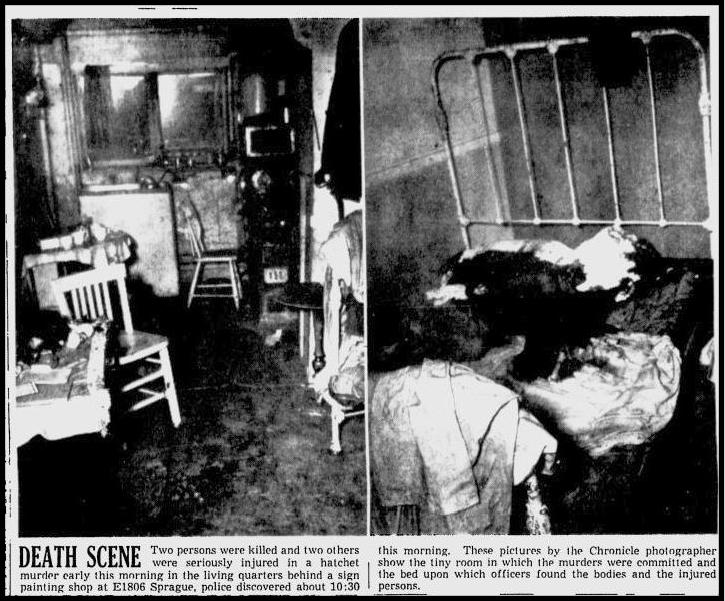 Before the trial, Clark’s defense attorneys pointed out that even if the prosecution’s scenario was true, it was a crime of passion, not premeditation, and was not a capital offense.

But in 1944, the law prescribed that anyone who compiled murder during a rape could be sentenced to death. Although no medical evidence of rape was introduced, the prosecution sought the death penalty saying Clark a advances toward the unconscious Jane Staples constituted a rape attempt.

Clark’s story was that when he left the party at 9 30 a.m., everyone was sleeping. He said the assault must have taken place after he left.

Two newspaper boys testified they saw Clark near the Dillon home at about 4 30 a.m., and said he asked them directions downtown. They said Clark had blood on the white shirt he was wearing.

When police found Clark, there was only a small spot of blood on the pants he had been wearing that night and none on his shirt. His roommate said Clark had borrowed the pants from him, and the blood stain was caused by his own nosebleed {the roommate’s] days earlier.

Police found a bloody white shirt on a chair at the murder scene, and the prosecution said Clark, after seeing the news boys, must have realized he had to get rid of the bloody shirt, so he returned to the shack and left it there.

Jurors later admitted they had doubts about the prosecution’s case, but they said Clark’s own testimony and demeanor finally swayed them.

“It was the little things that convinced the jury of the guilt of the defendant. The members all agreed,” a newspaper account said. “Actions of the defendant in the courtroom, his demeanor and many meaningless denials upon the stand convinced the jurors of the verity of the state’s charge that Clark committed the murders in a rage because Dillon thwarted his attempt to rape Mrs. Staples, one juror said.

“The jury noticed Clark’s roving eye when a pretty woman entered the courtroom, (the juror) said.” 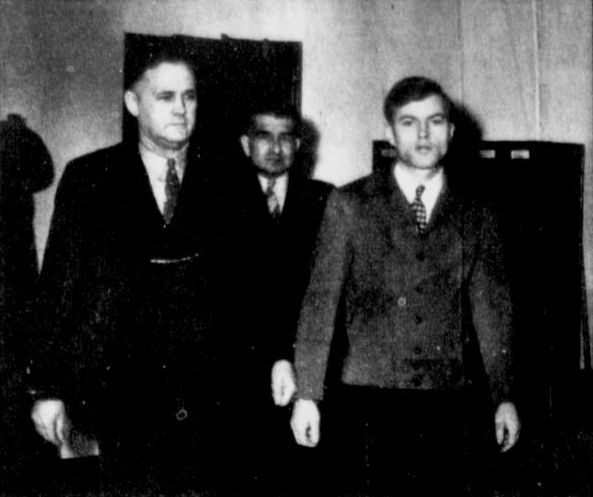 Above, Woodrow Clark is escorted to one of his trial appearances. Photo Credit: The Spokesman Review

At 4 p.m. on Oct. 4, he was taken from his cell on death row and placed in the single cell in the execution chamber. There were guards present to “observe him constantly,” and a chaplain, who would remain throughout the night.

But seven hours before the hanging was scheduled. Lt. Gov. Victor A. Meyers, acting as governor, called the warden on the line which was kept open between the governor’s office and the prison in the eight hours prior to any execution. Whitey was granted a 90-day stay of execution.

Meyers said he granted the stay as the result of a “deluge” of petitions, letters and phone calls from Spokane objecting to the hanging and from his own review of the record, which left ‘”some question in his mind because the conviction was based on circumstantial evidence.” 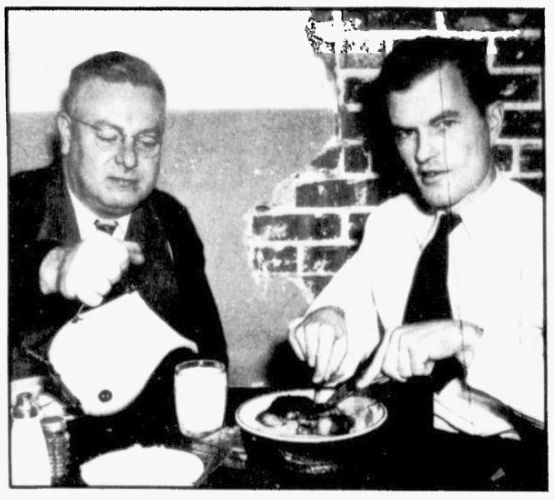 While awaiting execution in Walla Walla in January 1946, Clark enjoys one of his last meals. Photo Credit: The Spokesman Review

Governor Monrad Wallgren appointed a man to look into the case, and a citizens’ committee in Spokane led by L. Lore Wartes, was formed to convince the governor to commute Clark’s sentence to life imprisonment.

But they could only prolong Clark’s life. They could not save him.

He was fed a meal of his choice.

At 11:30 p m., the warden read the death warrant to Clark. At 12:05 a.m., Feb. 5, his arms were strapped to his sides, and he mounted the gallows. As he stood over the trap door, his legs were strapped tightly together. The noose was placed over his head and “adjusted by an individual expert in such matters who is kept on a retainer by the state for this purpose, and who has become thoroughly familiar with the physical attributes of the condemned to ensure a quick and painless death.”

There is no record of whether Whitey Clark requested a hood.

In an adjacent room, three volunteers pressed three buttons, one of which sprung the trap door.

About fifteen minutes later, a physician and a coroner pronounced Clark dead, and his body was cut down.