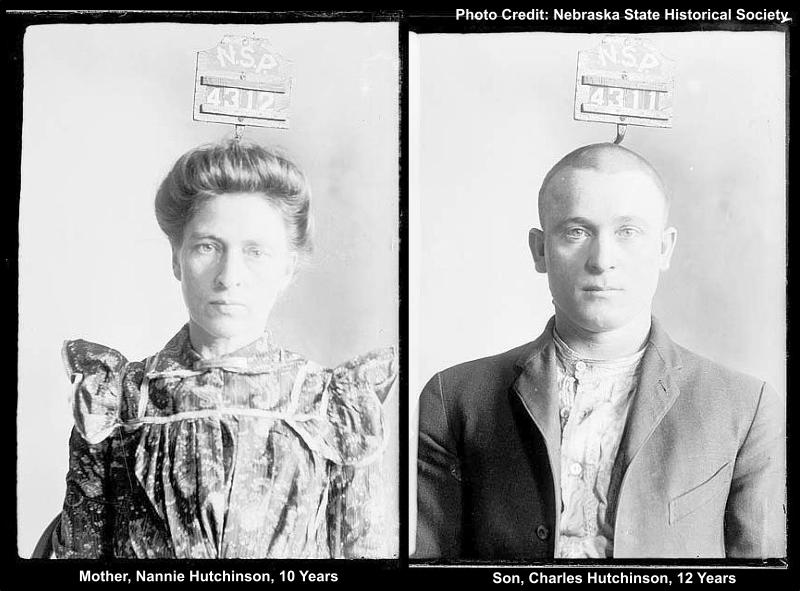 On November 1, 1903, Eli Feasel disappeared from his farm south west of Bostwick, Nebraska, about 15 miles east of Red Cloud. His housekeeper, Nannie Hutchinson, said he went to visit his son in Kansas City. Feasel’s brother, Thomas, grew suspicious when inquiries found no trace of Eli. Investigation led to the arrest of the housekeeper and her 21-year old son Charles. With little evidence that a crime had been committed, they were released after their hearing.

The following spring, a Mr. Stanley began farming Eli Feasel’s place. While working in a field, he found what appeared to be a newly opened grave. Upon close examination, authorities discovered a human hand, some hair from a man’s head, part of a coat with an empty whisky bottle in the pocket and other pieces of clothing.

Authorities believed Charles Hutchinson had seen Mr. Stanley plowing the field where the grave was later discovered. Charles began to act suspicious. On May 6, he rented a buggy. He said was going to assist in taking the rig to Starke Ranch at Amboy, about 5 miles east. The next morning, Charles returned the rig to the livery stable in Red Cloud and paid the usual fee to Amboy. The team of horses used by Charles appeared to have had a longer drive than a trip to Amboy. Stable workers also noticed a terrible stench emanating from the rented buggy and cushions. They paid little attention to it until Mr. Stanley discovered the open grave on the Eli Feasel’s place.

With the new evidence, authorities quickly rearrested Charles and his mother Nannie. Authorities believed that on the night Charles rented the buggy, he and his mother returned to the site where they had hidden Feasel’s body in order to move the remains. The Hutchinson’s had left tell-tale clues behind them; footprints of a man and woman corresponding to their shoe sizes.

At trial, mother and son were found guilty of second-degree murder.

You can read more about the Hutchinson via a Google News Archive digital copy of The Superior Express, (Nebraska). Page One and Page Five.