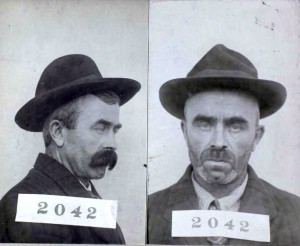 The case of George Tisdale, convicted in 1911 for second degree murder and sentenced to 10 to 15 years in federal prison, reveals a deplorable side to the prison justice system at that time. The story below  comes from the August 1926 edition of the publication, The O.E. Library Critic. The article details how Tisdale was forcibly committed to St. Elizabeth’s Hospital in Washington DC, the oldest insane asylum in the country, by McNeil Island Federal Penitentiary officials where he was held past his release date without due process. The likely reason – the hospital was paid an allowance by the federal government for each patient. More patients = more money.

One attempt by a lawyer to have him released by writ of habeas corpus succeeded, but instead of being freed, thugs from the insane asylum entered the courtroom and forcibly kidnapped Tisdale who was then hauled back to the hospital under the pretense of “observation.” They had already been observing him for thirteen years. Tisdale was eventually released after a congressman intervened on his behalf.

The horrors of St. Elizabeth’s Hospital have been well-documented during the 20th Century.

In 1911 an Alaskan miner, George C. Tisdale, took part in a miners’ brawl in which a man was killed.  Tisdale surrendered himself to the local United States marshal, for criminal justice is administered in Alaska, as a territory, not by locally chosen officials, but by the United States Department of Justice, was tried and sentenced to the Federal Penitentiary at McNeil Island.

After two years residence in this prison Tisdale was transferred to Saint Elizabeth’s Hospital for the Insane in the District of Columbia [Washington DC] on recommendation of the prison alienist.  Whether this recommendation had a sound basis or not I do not know.  It is a notorious fact that inmates of Federal prisons who are too persistent in their attempts to secure their liberty, or who know too much about inside affairs, and who thus make themselves annoying to or feared by the officials, are frequently gotten out of the way by sending them to Saint Elizabeth’s “for observation” as to their sanity.  This serves a double purpose; it protects the prison officials from exposure, and it enables the asylum authorities, who are in collusion with the penal powers, to say that the prisoner is “dangerously insane” and so to hold him incommunicado and so prevent his telling tales to his friends or taking legal measures for his relief.  Any little eccentricity, such as inclination to doubt the infallibility of the courts, is enough to afford a plausible pretext, plausible enough for a prison doctor under the thumb of the warden.  You won’t believe that possible, but it is a fact, and you shall see presently.

Tisdale was still at Saint Elizabeth’s department for the criminal insane on October 4th, 1921, the date on which his original sentence for murder expired.  One might have expected, therefore, that he would be discharged in the usual manner as with other prisoners, and allowed to go home, or at least that the usual discharge would take place but that if he was really insane, he would be temporarily held until a court order of commitment as a lunatic could be secured, as the law requires, a process which would involve definite proof of insanity to the satisfaction of the court.  Even if that were done, he should be removed from the noisome (noisy) Howard Hall, the walled prison within the precincts of Saint Elizabeth’s, and given such restricted freedom as other non-criminal inmates enjoy.

Nothing of the sort happened.  Tisdale was not released; he was not brought into court for a hearing on his mental condition; he was not transferred to the status of a non-criminal patient.  No, he was just held and treated as a criminal, despite the fact that his sentence had expired.

For four years this man, who had paid the penalty of his crime, if crime it was, was held under the status and all the disabilities of a criminal.  Meanwhile another person, a fellow prisoner in Howard Hall, who was just as sane as you or I, had made the acquaintance of Tisdale and learned of the predicament in which he was, thousands of miles from home and without a friend.   This person was more fortunate and had managed to secure his liberty.  He interested others in Tisdale’s case, and a local welfare worker, Mrs. Eldred, attempted to secure  a writ of habeas corpus for Tisdale, the effect of which would have been to have him brought into court, and the asylum authorities required to show why they were detaining him.  Not only was the writ dismissed by the local court without a hearing, at the instigation of Dr. William A. White, the superintendent of the asylum, but an order was issued prohibiting Mrs. Eldred from entering the institution.  A second time an application for a writ was made, this time by our friend John A. Savage, [a lawyer] who actually succeeded in having Tisdale brought into court, and freed on the ground of illegal commitment and illegal detention, and as being of sound mind.

But the Saint Elizabeth’s people were not through with him.  Disregarding the action of the court, bullies were sent from the asylum, who grabbed Tisdale in the court room and carried him back to prison under the pretext of “holding him for observation,” and that, mind you, after they had already had him under observation for thirteen years!

Called on by a member of Congress who had interested himself in Tisdale’s cases to explain his action, the superintendent of the asylum, by this time swelled with conceit of his own importance and ability to disregard the law, replied with an important letter, which, however, did not settle the congressman.  The latter took the case in hand and succeeded in getting Tisdale discharged, after illegally held for four-and-a half years.

Meanwhile, the man who had befriended Tisdale in the first place was subjected to persecution from another governmental source, the post office department.  Post office inspectors apparently opened his mail, and I myself have received complaints from various correspondents that they had been annoyed by communications from the post office department asking to be informed confidentially what relation they had had with this gentleman. Speculation as to the reasons may be premature, but may be surmised that those whom he was opposing in the Tisdale and other cases had endeavored to implicate him in a charge of using the  mails to defraud, and thus to head off his activities in behalf of the unjustly oppressed inmates of Saint Elizabeth’s asylum.

Why is it that the authorities of Saint Elizabeth’s seem so determined to get and to hold on to patients, whether legally or illegally?  That, to, can be but a matter of surmise only.  It has been suggested that as the institution gets an allowance for each patient, every person they can detain is a permanent source of revenue.  That Tisdale was sane at the very time he was prevented from seeing his advisors, on the ground that he was dangerous, there can be no question.  Such an occurrence can follow only either as the result of grossly incompetent management or of motives which, seeing that they involve disregard of well-known legal provisions and result in a person in sound health and under no criminal charge being held as a convict, can be regarded as little short of criminal.