With this post, we introduce a new segment on HCD called “Mug Shot Monday,” which features a mug shot or photograph and a short bio. Today’s mug shot is a 20 year-old shoplifter circa late 1890s with an interesting bio. 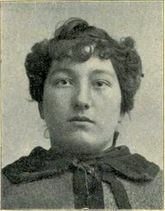 “Case 15 is a young woman, single, 20 years of age, and a native of Chicago. For the last three years she has adopted the life of a thief, her specialty being shoplifting. She has been in the bridewell four times and in the county jail four or five times. She has a decidedly pleasant and rather intelligent face, with a tinge of the “fly” expression, blended with caution, and even suggesting a trace of modesty. She is a trifle over average brightness, is well formed and plump, and has a frank and sociable disposition.

“She began crime early in life. When her mother sent her to buy cabbages she would steal the cabbages and keep the money, not because she never got any spending money, but because she wanted more. At 10 years of age she stole $2.60 in dimes and nickels from a cup in the pantry of a neighboring woman, who kept a candy store. At 11 years of age she stole two watches, one the day after the other, in a down-town department store. At 12 years of age she borrowed $5 in her mother’s name, but without her knowledge, from the wife of a neighboring saloon-keeper, on the plea that it was required to save a brother’s membership from lapsing in a beneficial society, her father being away from home at the time.

“Her father died in 1889 of dropsy at the age of 49, and her mother in 1892 of cancer, at the age of 52. Up to the time of her mother’s death she remained at home and attended school, being two terms short of graduating. She was now 17 years old, and says that because she could not get along with her brothers she left home and joined a girl schoolmate in systematic thieving. Her parents were strict Catholics, but her father would drink ‘a little too much” two or three times a year. She says she was always the “wild child of the family,” in which there were five bothers and three sisters, two of the brothers being older than herself.

“The others attended Sunday-school willingly, but she disliked it, and would play truant on an average of half the time. But she has never doubted as to God a future state, and rewards and punishment. She never read novels or much of anything else.

“Speedily she and her schoolmate pal became associated with a number of more experienced thieves, male and female, and for a while she lived with one of the men recently tried for the Marshall murder. She thinks she must have stolen over three hundred times, mostly from crowded stores, with an occasional chance at pocket-picking. Such articles as jewelry, ornaments, silks, dress goods, jackets, and even hats were the most common objects of attraction. She was usually accompanied by another woman or man, and would slip the articles under her cape or some other convenient garment she would wear. The stolen articles were sold to some of the many ”fences” in town.”