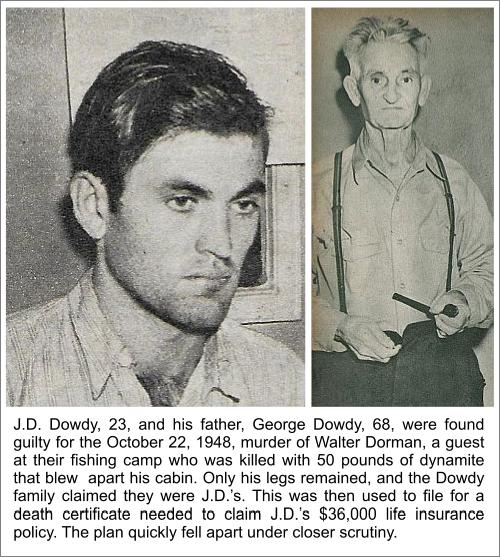 In late October 1948, Hattiesburg, Mississippi house painter Walter Dorman, 42 or 44, was vacationing at a fishing camp near Tallulah, in the northeast corner of the Louisiana (near the Mississippi River, Mississippi Delta, and Lake Providence).

The fishing camp was owned and operated by George Dowdy, 68, and his son, J.D. Dowdy, 23, a World War II army veteran.

On the night of October 22, J.D. Dowdy and Dorman were seen together near the fishing cabin. Later, at 11:30, Dorman entered his fishing cabin and was killed instantly when it exploded. Exploded is the wrong word. The cabin blew apart in a several thousand pieces. Dorman’s legs were the primary body parts left to identify him.

“Relatives of Dowdy identified the legs as belonging to him,” the Monroe News-Star reported on October 28. “Relatives of young Dowdy asserted the legs were the only remains of their brother and young son.”

“He was like a brother to me,” a grieving George Dowdy told a local newspaper reporter. 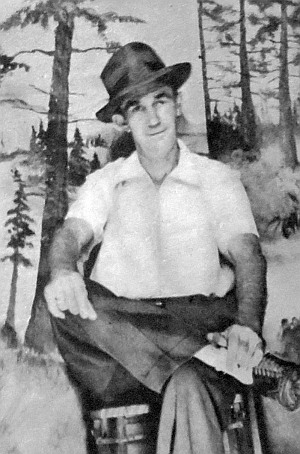 Two days after the explosion, Walter Dorman’s wife reported him missing. Police tracked Dorman to the fishing camp where they discovered that the owner’s son, J.D. Dowdy, had been killed in an explosion several days before. The whole town was still talking about it since the blast was felt by all within a five-mile radius.

But since Dorman wasn’t there, police began asking questions and learned that young Dowdy had $36,000 in life insurance, with a double indemnity clause.

This raised more questions, which prompted witnesses to come forward and start talking. Some of them told investigators that J.D. had recently purchased a 50-pound case of dynamite. [Author’s Note: Fishermen living along the river often used dynamite to catch fish.] A cab driver came forward to report that on the night of the explosion, he drove two men within one-half mile of the rural fishing cabin. One of them “was reportedly drunk.” Both men fit the description of Walter Dorman and J.D. Dowdy.

George Dowdy, the straw boss of a nearby plantation, was arrested two days after the explosion. During questioning, the older Dowdy was inconsistent in his explanations for the dynamite, the large life insurance policy for his son, his apparent lack of grief over his son’s death, and, more importantly, his account for the unknown whereabouts of Walter Dorman.

Backed into a corner, he confessed. The Dowdys’ master plan was to have George declare the remains of Walter Dorman were that of his son, J.D., and then use the death certificate to collect $36,000 in life insurance (the 2019 equivalent of $380,000).

His son J.D. had already been on the run when the all-points bulletin for his arrest went out over the wires. Described by all who knew him as “not very bright,” J.D. was captured on November 1 near the Louisiana-Texas border where he had just left the home of his sister.

At his trial, the prosecution called fifty witnesses and presented strong circumstantial evidence. Dowdy’s court appointed defense attorney called five witnesses, friends of J.D.’s, who reported that he was “goofy,” and “weird,” and “unusual,” —a poor attempt to convince the jury he was mentally deficient, and for whom the death penalty would be too extreme.

It didn’t work. J.D. Dowdy was found guilty, and eventually executed on January 12, 1951, protesting his innocence. Instead of being electrocuted at the state prison in Angola, he was executed in a portable electric chair in Mason Parish, the parish for Tallulah.

Interviewed several hours before his execution, Dowdy was asked how he felt. “I hold no grudges and can explain everything they have against me.”

As he was being executed, his mother, and sister sat in their automobile parked across the street from the parish jail. They had visited with him the evening before his execution, but were not allowed to attend his execution. He was buried in his mother’s hometown of Ringling, Oklahoma.