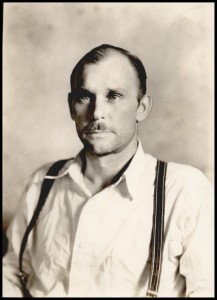 McDaniel was transported to the hospital, but died three days later of his wound.

On August 21, 1930, the suspect, along with another condemned murderer, escaped from the Fulton County Jail. He was recaptured on August 6, 1936, in Enid, Oklahoma, where he lived, worked and was married under the name Roy C. Wallace.

According to his ex-wife “Mrs. Wallace,” who divorced him shortly before he was identified by an Enid police officer through his fingerprints, she claimed he wasn’t that bad of a guy. “His only trouble is that he has outbursts of uncontrollable temper. At other times he was as kind and generous as could be.”

On August 9, 1938, he was convicted of two counts of attempted murder and sentenced to two concurrent 10 year sentences in the Oklahoma Penitentiary.

Patrolman McDaniel had been employed with the Atlanta Police Department for 17 years and was survived by his wife. Frederick Fair died in Atlanta, Georgia, in March of 1963.

Research Note: I could find no information about his Oklahoma conviction for attempted murder, or his time in an Oklahoma prison. However, I have sent emails and requested information from several state and city government sources and hope to have a more thorough update on this case in the future.