“The first case [George Perry] considered is that of an epileptic, and arson is the crime charged. Epilepsy has many causes and many forms. Some persons have the convulsions with little, if any, apparent mental disturbance, while in others the nervous explosions, so to speak, produce a much greater effect on the mind and may even take the form of furor or insanity. 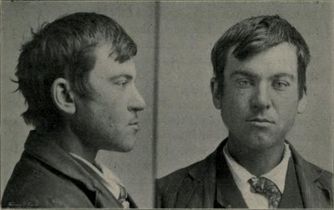 “At the Elmira Reformatory 11 percent, of the prisoners had epilepsy or insanity quite strong in their family histories and many more had bad heredity in other respects.

“The following is a type of the most unfortunate kind of unfortunates—those who are liable to commit crime.

“They are always morbidly and excessively irritable and are quite sensitive to the fact that they have fits, and they usually hide the fact as far as they can, which is a practice not without some reason. This case has twice been a patient in an insane asylum, entering the first time at nine years of age and he has spent most of his life incarcerated.

“He is now twenty-two years old and had only left an asylum a few months before he was arrested for arson.

“When he left the asylum he had neither father, mother, nor friend to help him, and he was discharged under his protest. His mother died of consumption some months before and his father was too poor and far away to give him help. His only lot was to seek out odd jobs in the neighborhood to gain him shelter and food. He tarried in this irregular way for several months and finally tramped off in search of greener pastures.

“He had been a week with his last employer when he set fire to the barn. Just previous, the same morning, he had been to a saloon not far away, where he drank whiskey, but does not know what possessed him to commit the crime. He says his employer had treated him meanly, which is not at all unlikely, for such creatures are commonly treated without proper consideration.

“But whether this was so or not, he probably would not have committed the arson had he not been the subject of a mind perverted by the epilepsy and with all its morbid possibilities, making him not only irritable, but a dangerous person.

“He has the habit of reading the New Testament and saying prayers much of his time. In his cell almost every night he has a spell of incoherent muttering in French and Latin and of a religious composition. At times he is quite “ugly” in disposition to his cell-mates, and sometimes they are afraid of him.

“His mother died of consumption and his father, he says, is a good man, attending church, and neither smoking, chewing nor drinking, and he wishes he was like him. But it seems, as he remarked, that he cannot do better.”