The Premonition of Sgt. Anton Nolting, 1909

Anton J. F. Nolting was born in San Francisco on February 9, 1860. He was of a studious disposition and acquired a high education. As a young man he was in comfortable circumstances financially but meeting with reverses, he joined the San Francisco Police Force on December 2, 1895.

Because of his quiet, unassuming and kindly manner, he was one of the most popular men in the department and was also generally admired because of his devotion to his invalid wife.

On October 2, 1907, he was assigned as a Patrol Sergeant to the Central Station.

He reported for duty on the watch beginning at midnight January 8, 1909, and it was noted that he was in an extremely melancholy mood. As a storm was raging, all patrol officers wore regulation rain coats throughout this watch.

About 1 a. m., Sgt. Nolting met Officer William Cavanaugh at Kearny and Bush streets. The Sergeant said that he felt that something terrible had happened or was about to happen.

After some meditation he said: “Perhaps something has happened to my poor wife.”

Nolting complained of dizziness and at Cavanaugh’s suggestion he went into the saloon at the southeast corner of Kearny and California Streets (A) and ordered a bromo-seltzer (similar to an alka-seltzer). The Sergeant then said he did not want to be alone and requested Cavanaugh to accompany him down California to Montgomery Street (B). Upon reaching that corner Nolting thought he saw the Montgomery Street officer at Sacramento Street (C) and proceeded alone in that direction, while Officer Cavanaugh was returning toward Kearny Street. [Subsequent discoveries proved that Nolting had evidently mistaken a civilian, who was also wearing a rain coat, for the officer.] 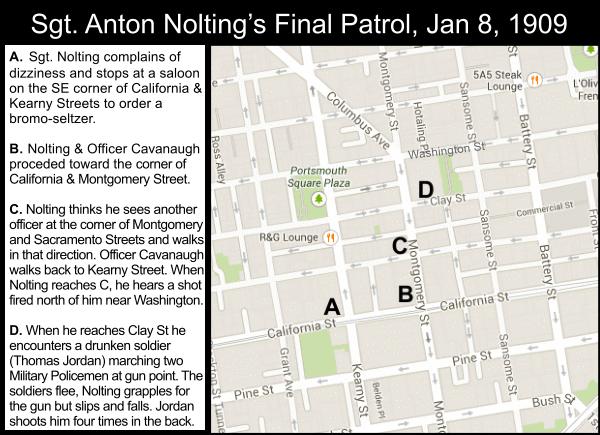 About the time Nolting reached Sacramento Street he heard a shot fired on Washington Street near Montgomery.

He proceeded in that direction, but when he reached Clay Street (D) he observed a soldier with a drawn pistol who was in the act of forcing two other soldiers to march ahead of him. Nolting approached the trio and began to expostulate with the soldier with the drawn revolver. At this instant the other two soldiers fled down Clay Street toward the ferry. Seeing that he could accomplish nothing by argument, the Sergeant closed in on the soldier and began grappling for the pistol. Nolting slipped and fell and while his back was partially turned, the soldier fired into his body, inflicting a wound which caused almost instant death. After firing three more shots at the officer, the soldier attempted to escape. He ran into a vacant lot which was almost immediately surrounded by Officers Brady, Teutenberg, Cavanaugh and Sheble, who were attracted to the scene by the shots. These officers closed in on the assassin shortly after he stumbled and fell and they found the empty revolver by his side.

When taken before Captains Anderson and Duke at the Central Station, he disclaimed all knowledge of the shooting and claimed that his mind was a complete blank regarding his actions during the preceding hour.

He stated that his name was Thomas Jordan and that he belonged to the Coast Artillery stationed at Fort Baker. Shortly afterward, the two other soldiers (who ran away) were apprehended at the water front.

One of the two made a statement substantially as follows:

“My name is Charles Nibarger and my companion’s name is John Kralikouski. We are soldiers stationed at Fort Baker. I had been sent out as a provost guard (Military Police) and was armed with a revolver. I was in the New Western saloon at Kearny and Washington about midnight with Jordan and Kralikouski.

“In some manner Jordan got possession of my gun and pointing it at Kralikouski and me, he ordered us to march ahead of him. When we were going down Washington Street he said we were not moving fast enough and he fired a shot in the air. When we reached Montgomery Street he ordered us to turn toward Clay Street. When we reached the last named street, the police Sergeant approached and asked who fired the shot.

“While he and Jordan were arguing we ran down Clay Street. We had only traveled about forty feet when we heard the shots.”

On Sunday, January 10, Sergeant Nolting’s funeral took place. The Mayor, Police Commissioners and about 300 officers attended. The largest floral piece around the casket was one sent by the soldiers from Fort Baker.

Jordan was held to answer in the Superior Court. The defendant claimed that he was in an “alcoholic trance” when the deed was done. Hiram Johnson was retained as special prosecutor.

On March 12, 1909, Jordan was found guilty and sentenced to life imprisonment.

After the death of her husband, Mrs. Antonia Nolting failed rapidly and she was found dead in her bathtub on October 24 of the same year.