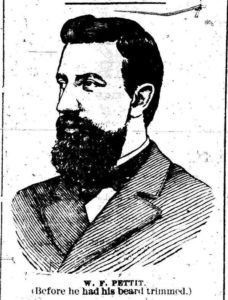 At few times in its history has the small town of Crawfordsville, Indiana ever been more regularly in the spotlight than it was between the autumn of 1889 through November 1890. The Pettit murder trial, “the most publicized case in this period,” began with published rumors of the Reverend William F Pettit’s suspicious conduct around the time of his wife’s death in August 1889, continuing through grand jury deliberations and his arrest in early 1890. His lengthy and dramatic trial, held in Crawfordsville between October and November 1890, “attracted attention throughout the Midwest because of the prominence of the families involved in it.”

The Pettit murder attracted widespread attention for two good reasons. On the one hand it was the lurid nature of the case: “the murder for which Pettit stands convicted was one of the most deliberate, cruel, and cold-blooded crimes ever committed in the state of Indiana.” The courtroom was packed daily and local spectators lined up every morning with their own chairs. Even Lew Wallace, the author of Ben Hur and the town’s most famous resident, was in regular attendance (and said to be writing a novel based on the case), as were journalists from Indianapolis and Lafayette—whose stories were reprinted widely.

In addition, the prominent social position of the murderer and his accomplice made it equally dramatic. Not only was Pettit the minister of one of Indiana’s wealthiest Methodist congregations, but he was also one of the highest-ranking Freemasons in the state. His accomplice, the widowed Clemmie Whitehead, came from an upstanding family—the Meharrys—that was easily the wealthiest in the Montgomery and Tippecanoe County area that its landholdings straddled.

The entire Pettit affair also illustrates the tension that existed in America’s evolving justice system. As the legal scholar Elizabeth Dale has so deftly shown, America’s justice system was an evolving, contested arena well into the twentieth century. Even late into the nineteenth century, local notions of popular justice coexisted with the distant, bureaucratic arm of the state. For instance, in western Indiana, the vigilante Horse Thief Detective Agency had a far greater presence than the various county sheriffs and local police. While the vigilantes did not get involved in the Pettit affair, the actions of ordinary citizens were decisive in first obtaining official prosecution and then conviction. Gossip and shaming were central to the affair, and these were classic forms of popular justice. The people of Shawnee Mound were convinced of Pettit’s guilt, but believed his station would enable him to get away scot-free. Their actions, which he sought to counter, led to his demise.