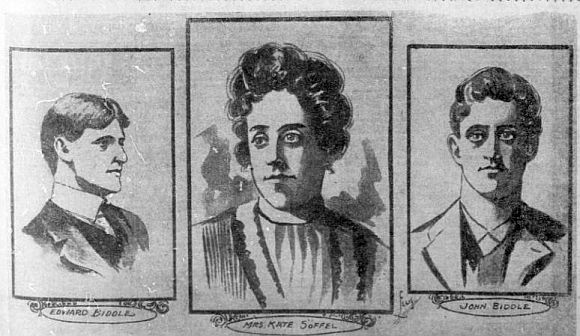 Story by Thomas A. Duke, for his book, Celebrated Criminal Cases of America, 1910.

During the early months of 1901, twenty-seven burglaries were committed in Pittsburgh, and the modus operandi of these bold thieves convinced the authorities that the crimes were all committed by the same persons.

In the early morning of April 12 an effort was made to burglarize the grocery-store conducted by Thomas Kahney, who discovered them in the act and was shot dead by one of the thieves.

On the same morning Inspector of Police Robert Gray and Detective Patrick Fitzgerald received information that the movements of a gang of men and women living at 34 Fulton Street should be investigated.

The officers proceeded to the house, and upon being refused admission they began to force an entry. As they did so, a shot was fired which killed Fitzgerald.

A posse then surrounded the house and two brothers, named Ed and Jack Biddle, Frank Dorman and two women, known as Jennie Wilcox and Jessie Wright, were arrested.

It was then learned that the men of this gang committed many and probably all of the twenty-seven burglaries above referred to and also the murder of Kahney, the grocer.

The entire gang was charged with murder, the two brothers being convicted and sentenced to be hanged on December 12, 1901.

Dorman was sentenced to life imprisonment and the two women were acquitted.

The Governor granted the Biddle brothers a respite of sixty days, during which time they were confined in the Alleghany County Jail in Pittsburgh.

At 4 a. m. January 30, 1902, Ed Biddle called from his cell to Guard James McGeary and announced that his brother had been taken suddenly ill and requested that the guard procure some cramp medicine immediately.

McGeary hastened to comply with the request, and when he returned with the medicine the Biddles broke through the bars which they had sawed almost in two. They then grappled with McGeary and threw him over a railing down to a cement floor sixteen feet below. The guard struck on his head and for some time it was believed he would die.

The desperate men then produced revolvers which had been smuggled in to them and they shot another guard named Reynolds, inflicting a serious but not fatal wound.

As only one other guard was present, they covered him with a revolver and threw him into the dungeon where his outcries could not be heard.

As these two men then became complete masters of the prison, they took the keys from McGeary’s person and walked out of the prison into Ross Street.

When Warden Peter Soffel was informed of what had transpired he almost collapsed, but when he recovered himself he stated that his wife, the mother of his four children, had disappeared and that circumstances convinced him that her infatuation for Ed Biddle, who was a handsome fellow, caused her to surreptitiously supply the brothers with the saws and weapons and that she had probably accompanied them in their flight.

At this time the ground was completely covered with snow and a posse, consisting of three Pittsburg detectives and five other officers, started in pursuit in sleighs.

On the next day, January 31st, the officers learned that the Biddle brothers and Mrs. Soffel had dinner at J. J. Stevens’ home at Mount Chestnut, five miles east of Butler, Pa.

The officers started in pursuit, and upon nearing Mc-Clure’s barn, two miles from Mount Prospect, they saw the two brothers and Mrs. Soffel attempting to escape in a sleigh. When the officers got within sixty yards of the trio they commanded them to halt, but as the order was ignored the officers opened fire with their rifles.

The brothers responded, and during the fusillade they received fatal wounds and rolled off the sleigh on to the snow. Mrs. Soffel was also wounded in the breast and fell on to the snow, but by a miracle none of the officers was injured.

The three injured persons were taken to the hospital at Butler, Pa., where Ed Biddle admitted that Mrs. Soffel had rendered the only assistance they had received.

He stated that her reason for so doing was because she believed they were innocent men about to be hanged.

Mrs. Soffel was seriously but not fatally wounded. When she realized what she had done she expressed the wish that she would also die. She added that the brothers were forced to leave the jail earlier than intended, as she had learned that the cells were to be inspected in a few days and she feared that the officials would discover where the bars had been sawed.

When Mrs. Soffel fell from the sleigh she dropped a long letter written by Ed Biddle to her, which showed that she fell in love with the desperado in November, 1901, and on December 2 she began preparations to liberate him.

It was she who purchased the saws and weapons and smuggled them in to the prisoners.

Mrs. Soffel was prosecuted for her part in the jail break and sent to State Prison for two years. After her release she tried the theatrical business, but the performance was stopped by the authorities. She then went into seclusion, changed her name and earned her living as a dressmaker, fully repentant for her mad infatuation for Biddle.

On August 30, 1909, she died at the West Pennsylvania Hospital in Pittsburg from a complication of diseases.