Matt Rollinger is a Luxemberger, thirty-four years of age, married, three children, and a cabinet-maker by occupation. Boarding at his house was a man whose intimacy with Mrs. Rollinger gave rise to rumors which reached his ears, and finally he became convinced of their truth. 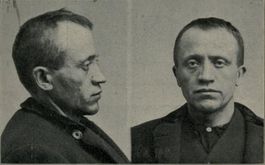 One morning after witnessing more than he could withstand, he sallied forth in the early twilight, partly attired in female garb, and with, pistol in hand lay in wait for the exit of his enemy. While the light was still dim he saw a form approaching which he thought was the man he wanted. He fired and the man fell dead. He had killed his friend and neighbor and not the object of his fury.

He was arrested for murder and at his trial it was shown he was in a bewildered and frenzied state of mind when found on the spot the next moment.

He is a stolid and childish creature with a harmless disposition except under great provocation. His mistake and confinement seemed to add a melancholic and demented condition. But he had the reputation of being a peaceable, industrious and skilled mechanic.

On good authority I am told that some of the jurymen remarked that if he had killed the man he intended to, he would have been acquitted. It seems they do not feel it would be safe to free him at once, and they saw no other course open but to sentence him to return the verdict of 14 years in the penitentiary.