From HCD: The biography of Native American Bobby BlueJacket, a safecracker & killer who redeemed himself inside and out of prison, will go on sale in February, 2018.  The book, Bobby BlueJacket: The Tribe, The  Joint, The Tulsa Underworld, is available for preorder from the publisher, First to Knock. Author Michael P. Daley, was kind enough to share with Historical Crime Detective a short story excerpt titled, “Always Take a Limousine to a Safe Burglary.” The story is just one of the fascinating episodes in the life of this forgotten criminal considered “a legend amongst Tulsans who considered themselves outsiders.”

“…I had such a hatred inside of me
that I was as dangerous as
any son-of-a-bitch that ever lived.”

Watch this book trailer on Vimeo. 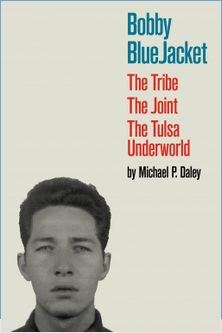 Bobby BlueJacket is the extraordinary true story of a career thief who first gained notoriety as a convicted teenaged killer. Based on over 5 years of research, the book draws from BlueJacket’s own memories, long-buried law enforcement and trial records, prison archives, news accounts, as well as interviews with others such as photographer Larry Clark and veteran reporters of Tulsa’s mid-century crime beat.

Born in 1930, BlueJacket came of age as a Native American in white Oklahoma—passing through teenage rumbles, scheming pool halls, and Midwest safecracker crews. While incarcerated, he remade himself as a celebrated prison journalist. By the 1970s, he would act as a political impresario, used tire salesman, and prison rodeo emcee—ultimately becoming an Eastern Shawnee activist and respected tribal elder. At each turn, BlueJacket sought out success and self-definition by any means necessary. More than just an underworld tale—Bobby BlueJacket is an in-depth exploration of one man’s experience in a brutal post-war world.

Bobby BlueJacket is illustrated with almost 90 photographs from never-before-seen personal archives, as well as images from prison publications and newspaper clippings.

Always Take the Limousine to a Safe Burglary

The following piece is excerpted from Bobby BlueJacket: The Tribe, The Joint, The Tulsa Underworld by Michael P. Daley. Publisher: First To Knock, 2018. This piece was adapted for Historical Crime Detective.

The years following World War II are often seen as a jubilee and a time of growth. But it wasn’t all tickertape parades back home. The hard reentry into civilian life led many veterans to booze, narcotics, crime, and violence. It was a troubling time even for those, like 18-year-old Bobby BlueJacket, who hadn’t seen any traumatic fighting overseas. Tulsa’s wartime boom had come to an end and the job market shrank, leaving few openings for the newly expanded applicant pool of returning soldiers. It seemed to BlueJacket like his whole city desperately needed a paycheck. The unskilled, of course, had it the worst.

Job prospects were grim. But the bonds between BlueJacket and his buddies only cemented. All back from the War, the teenage boys joined together to form a Golden Gloves boxing team. Their manager was a Sapulpa man nicknamed “Knobby,” due to his likeness to the bald-headed manager of funny paper heavyweight Joe Palooka. Knobby and the boys toured the Midwest, going as far as New York—fighting in social halls, gymnasiums, Masonic lodges, and even at the Tulsa Coliseum. The boys were carted around in an old stretch limousine that BlueJacket and Lewis had bought, likely with stolen dough.

It would have been nice to train at the local YMCA with the rest of Tulsa’s boxers, but BlueJacket’s crew was barred from the place. “The old boy that was the head of the boxing club up there, for some reason, he didn’t like us,” BlueJacket said in a 2014 interview with the author. “I guess he thought we was a bunch of thugs.” Instead, the boys trained in the basement of the Tulsa police station. The police basement was also ground zero for professional wrestling run-throughs in the late 1940s. And police, pro wrestlers, and teenage boxers were an even more dramatic juxtaposition than it appeared, because BlueJacket’s boxing squad also doubled as a safe burglary crew in the afterhours.

The young boxers had been stealing for a few years now. Such early capers included the jacking of a Wurlitzer jukebox at Capshaw’s 24-hour restaurant. But safecracking is a technical expertise and so the boys needed a little education before moving up the ranks. Luckily Tulsa, in the mid to late 1940s, was probably the best place to get a schooling on burglary. The city was uniquely positioned, geographically, forming a bottom third of an underworld triangle that included Omaha and Chicago. These cities, according to BlueJacket, produced some of the finest safe burglars that ever lived. “Tulsa was quite a town in those days, kind of crossroads,” he remembered while driving through the city in 2013. “And it just seemed like everybody congregated around Tulsa.” Each city’s crews did jobs on their own, but the big ones required merging. Through crew mergers, tips and skills circulated. “Tulsa was a real safecracking institute,” BlueJacket continued. “Some of the biggest and best safecrackers in the country come out of Tulsa, and that’s where we all learned the business.”

Perhaps Tulsa’s most notable safecracking professors were the Wilson brothers: Ted, Paul, and Ray. Ted Wilson had come back from World War II and used his G.I. Bill opportunities to attend safe and lock school. “Before [Ted] died he showed everybody how to open them safes,” BlueJacket noted. “These guys were big time.”

Many of Tulsa’s burglars came from the neighborhood around Pine and Utica, an intersection marked by the Rightway Skating Rink and Morris Pastry. “Everybody out there went to prison, was in reformatories and things. It’s where they all come from in Tulsa. It was a real hard neighborhood. If a kid got out of the neighborhood, he could get out but he was still scarred,” BlueJacket described. “Most people didn’t come down here unless they was goin’ to go skatin’.” The area was also where out-of-town thieves and bank robbers rested their heads.

BlueJacket utilized a number of safecracking methods while apprenticing with older crews, but punching safes was most common in those days. “Most of us around this country, you know, was punch n’ hammer, you see?” BlueJacket said, “We got into peeling ’em at the end, but I started out with the old punch.”

BlueJacket, with his young boxing squad, also took part in a less technical style of safe burglary—taking the entire safe with you instead of trying to crack it on location. This was where that old stretch limousine came into play. Besides its inherent flashiness, the automobile happened to have a wide enough passenger door to fit a large safe through. “We had snatched a couple of safes around town, where you couldn’t really beat ’em open there because there’s traffic and people livin’ above ’em in apartments and things,” BlueJacket explained. “So we’d snatch ’em out of there and throw ’em in the back seat of that car and drive off.” They would take the safes out to empty fields in rural areas, “and beat ’em open.”

Targets were identified based on the potential for cash-flow. In the first months of 1948, BlueJacket’s crew hit the Osage School Gymnasium, the East Admiral Boulevard Bar, Hamburger King on West Third Street, and the Kid Cola plant at Third and Guthrie. The Cozy Theater was hit three times. The boys also got $120 from the Triple J Café, whereas a burglary of the Little Mayo Café reportedly yielded only 15 cents.

Towards the end of March, BlueJacket had a line on some gambling money. “If anybody was gambling, I usually knew about it,” he said. This job involved two different Greek diners across the street from one another on Boulder between 4th and 5th. One side of the street had a small, six-stool café called Purity Lunch. Across the street was the Boulder Café at 415 S. Boulder. Between these two places a lot of gambling was going on. Because gambling money can’t go in a bank, the Boulder Café had a mighty safe underneath the counter, stuffed full of cash and built into concrete.

On March 24th, BlueJacket, Rafael, and Chub made out for the Boulder Café. They didn’t have the limousine that night, but had access to a ’48 Plymouth four-door thanks to a boy named Griffin who would drive. The plan was to chip and pry the safe out of the concrete with bars, and then use Griffin’s Plymouth to cart the thing off. Punching or peeling on site would be too loud.

Griffin parked across the street. The others approached from the alleyway, where a big, inactive ventilation fan was. “We bent the blades on that fan and went on in,” BlueJacket described. “Took pry bars and beat that safe out of the ground. Pried it enough to where we weren’t making a lot of noise.” 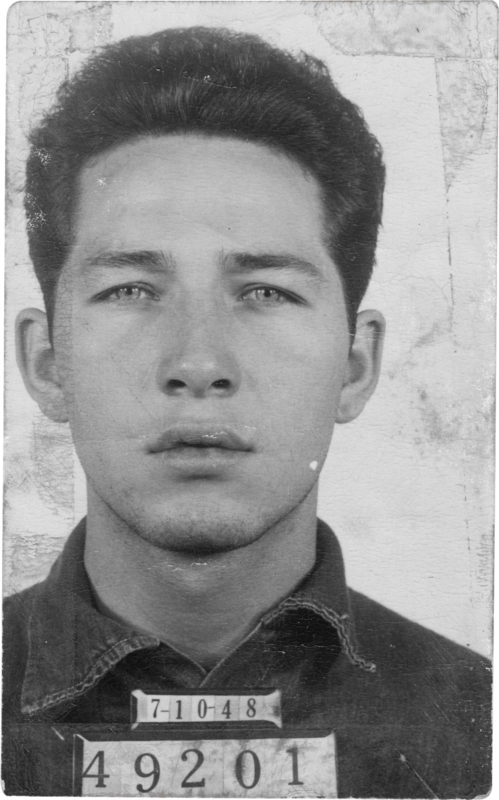 When the chipping and prying was done, Rafael flashed a lighter in the window. That was the signal. Griffin pulled his Plymouth around. The boys came plowing through the front door with the safe in their arms. The plan was to throw the thing in the Plymouth’s back seat, like they usually did with the limousine. The quicker the better as it was heavy as hell. But there was a problem. The safe wouldn’t fit in the Plymouth’s backseat. BlueJacket said, “The reason the son of a bitch won’t fit is we was goin’ by that big Buick seven or nine passenger limousine we had with the big wide door.” They were confused, now stuck out on the sidewalk holding the Boulder Café’s safe. Their arms were growing real weary. A cruiser could roll by any second.

The boys decided to set the safe down in BlueJacket’s lap and figure out a backup plan. “There on the curb, I’m holding the safe in my goddamn lap and I’m pinned to the ground, can’t move,” he said. “It pinned me to the ground.”

After further consternation, they dropped the safe into the trunk, bringing the back of the car down low, nearly scraping the pavement. Now it was time to move. The boys jumped in. Griffin hit the gas. The Plymouth peeled out, porpoising like a speeding motorboat through the empty streets.

In 2014, BlueJacket revisited the location of the Boulder Café, which is now a parking garage. Thinking back on his times as a safe burglar, BlueJacket said there was a lesson to be learned:  “The moral of the story is don’t try to put a goddamn safe in the back seat of your car ’til you measure the door.”

415 South Boulder, Tulsa, OK, former site of the Boulder Cafe which was burglarized on March 24, 1948 by Bobby BlueJacket and associates. Click to open larger image in new window.

Michael P. Daley writes about crime and cultural history. His previous books include Enjoy The Experience: Homemade Records 1958–1992, which was featured in BBC, NPR, Vice, Book Forum, Rolling Stone, and was called the greatest music book of the year by Los Angeles Magazine. He was founder/Editor of Parallax News, a digital news service for the 2016 U.S. Election. Michael was also a founding member of Boo-Hooray and Sinecure Books. He has worked on productions for Rizzoli, Four Corners, Zero Books, Brookings, and Warner Brothers.