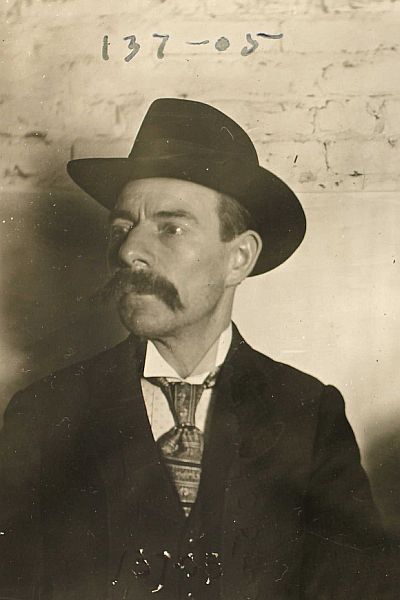 Police Officers A. 0. Juel and E. C. Gould captured two opium smugglers yesterday and secured their plunder. The officers will very likely receive a substantial reward from the Government. The men arrested were John Gavin, alias Murphy, and Joseph Kirk, alias Duffy. Both men are known to the Federal authorities as being dangerous men. They were taken to the Hall of Justice and held until the proper papers could be drawn up so as to hold them in the County Jail. 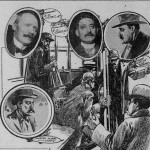 This image accompanied the story presented here from The San Francisco Call, 1902.

The capture of these men is due to the observing qualities possessed by Officer Juel. The latter and Officer Gould were on their way home at 6 o’clock yesterday morning and were waiting at Lotta’s fountain for an outgoing Market-street car. Juel happened to notice two rough-looking men on a northbound Third-street car that was on its way out Kearny Street. He saw that the men were covered with mud, and that they had three telescope baskets in their possession. The early hour, coupled with the dilapidated appearance of the men and baskets, led Juel to investigate. He called to Gould and both sprinted after the moving car. They boarded the back platform and walked through the car to the front portion, where the men were seated. The officers were in citizens’ clothes. Juel questioned the men, and their answers were evasive.

No Clams in Basket.

“What have you got there?” asked the officer. “Clams?”

“No,” said one of the fellows, sullenly.

“Do they belong to you?” asked Juel, indicating the baskets.

“No. They belong to a friend of mine,” answered the spokesman.

During the conversation Gould made a closer investigation. He poked his finger through the aperture and came in contact with a tin. It dawned on him that it was opium and he so informed his brother officer.

When the car was in front of the Hall of Justice, Juel pulled out his star end told Kirk and Gavin he was an officer and ordered them to come with him. Gavin made slight resistance but Gould hauled him off the [trolley] car in a hurry. The officers brought their men and plunder to the Chiefs office, and a closer examination of the basket revealed Z30 five-tae; cans of opium. The men were taken to the City Prison on the top floor of the Hall of Justice, and were booked. They gave their names as John Duffy and Joseph Murphy. Collector of the Port Stratton was notified of the capture and he detailed his clerk. Ellis A. Holmes. to place the opium under seizure. The District Attorney’s office was notified, and a complaint was drawn up and sworn to by Officer Gould. Late in the afternoon the men were taken to the County Jail where they will he held on three counts.

Supposed to Be Members of Ring

It developed during the day that Kirk is employed as fireman on hoard the City of Puebla, which arrived at this port on Monday. Gavin was formerly employed on the same boat. The theory of the Federal officers is that Kirk and Gavin are members of a gang of smugglers who have been operating on this coast for the last six months. Their plan is to secure the opium at Victoria. The stuff is brought from China by one of the gang and transferred to Kirk when his vessel stops at Victoria. 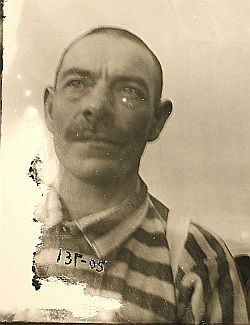 John Gavin’s mug shot after he was processed at McNeil Island Federal Penitentiary.

Both men bear unsavory reputations. Gavin was badly wounded by a customs officer while trying to smuggle opium at Honolulu. Kirk is believed to have been a member of the Romula gang of opium smugglers who operated some years ago. He is recognized by the local inspectors as the man who avoided capture at the hands of Inspector Sprague by jumping overboard and swimming under the dock. His pal was “Hoodlum Harry.” who was captured.

The prisoners were loath to talk. They refused to make a statement when brought before Customs Surveyor Spear and Special Agents Channing and West. To a Call representative [San Francisco newspaper from which the story is taken] Gavin, alias Murphy, stated he was paid $2 to deliver the baskets to the Golden Eagle Hotel and he was on his way there when taken into custody. He swore he received the opium from a stranger whom he met in a saloon on the corner of Third and Harrison streets.

An effort is being made to locate the other members of the ring.

Follow-up: John Gavin was sentenced to two years in federal prison and was released after serving 20 months for good behavior. When he was arrested, he was rumored to have already amassed a fortune worth $20,000 from opium smuggling.

[1] Tael is a Chinese unit of weight that is approximately 1.6 ounces according to the figures provided by the story.

Check out our other Mug Shot Monday Profiles.