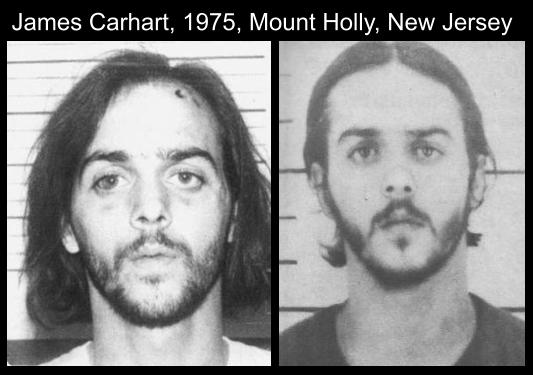 On the night of March 28, 1975, James Carhart, a former Army Sharpshooter from the 101st Airborne Division, “went berserk” and used his rifle to pick-off two police officers from the window of his third floor duplex in Mount Holly, New Jersey. Officers William Wurst and Donald Aleshire, died as they exited their patrol car. A third officer, John Holmes, was paralyzed by wounds he received that night and died in 1992 from complications caused by his injuries.

After he shot the three officers, Carhart was able to keep 300 policemen at bay for three hours until he was finally taken into custody. Inside his parent’s third-floor apartment, officers found twenty guns and plenty of ammunition.

During his trial held in 1977, Carhart said he was Jesus Christ and he killed the officers because they had persecuted him in his former life. Carhart is still alive and serving his time at the Ancora Psychiatric Hospital in Winslow Township.

Carhart’s crime is not forgotten in Mount Holly where it is still a painful memory for many who live there.

“25th Anniversary Of A Tragedy A Vietnam Vet-turned-sniper Left 2 Dead, 1 Disabled, Many Reeling, 2000”