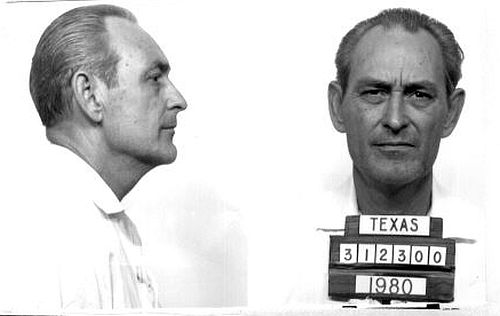 During the month of October 1974, Patrick Randel, an undercover narcotics agent with the Texas Department of Public Safety, was working a drug buy/sting operation against two underworld figures from Austin.

With $850 in “buy money,” Randel agreed to purchase Quaaludes from the two men. On October 23, the three met in a room at the Esquire Motel in Beeville—approximately sixty miles northwest of Corpus Christi. At 7:10 p.m., the three exited the motel room, with Randel leaving the money behind. Randel then got into his own car with one of the men in the passenger seat. The other individual followed in the vehicle they had driven from Austin.

It was the last time his fellow agents, who were monitoring the drug deal from nearby, saw Randel. One hour later, at approximately 8:10 p.m., the two men were seen returning to the motel and one of them entered and left Randel’s room.

When Randel failed to return by nine o’clock that night, the DPS issued an all-points bulletin to be on the lookout for the two men, their car, and a possibly kidnapped agent Randal.

At one o’clock in the morning, six hours after their agent was last seen, DPS narcotics agents and officers with the Cameron County Metro Squad pulled over the suspects’ vehicle near San Benito—just a few miles from the Mexican border. Arrested were Doyle Skillern, 38, of Austin, and Charles Victor Sanne, 41, of La Mahara, California. The car turned out to be stolen from Austin and investigators found the $850, Randel’s service weapon, and his wedding ring with Skillern, and Sanne had two of his state issued credit cards.

Although they had them in custody, it would take another hour-and-a-half before they learned what happened to their agent. Randel was found in his car located at a roadside park just east of the town of George West, near US 59 and (then) State Highway 9. He had been shot six times in the chest and abdomen. Randel, who was forty-years-old, left behind a wife, two sons, and a daughter.

The Skillern and Sanne trial held in January 1975 in Live Oak County was the largest at the time in the county’s history. It was a slam-dunk case against the two men since agents were monitoring most of the drug transaction up until the time Randel disappeared, and because they were found with the marked buy-money, service weapon, and other personal items.

The murder weapon, a 1914 South American revolver, was found along the roadside six weeks after the murder. Skillern was linked to the weapon by an Austin associate who said Skillern had tried to sell him the gun weeks before the murder.

The jury took three hours to convict both men, and after a contentious sentencing hearing, recommended the death penalty for Skillern, and a life sentence for Sanne.

For Skillern, it was his second conviction for murder. He had been released from the state prison in May (1974) after serving two years of a five-year sentence for killing his own brother at his Padre Island marina home in 1971. The body of Milton Skillern, 46, was found beneath four-inches of a concrete patio slab outside his home. Doyle killed his brother on or around May 17, 1971, following arguments with Milton that had gone on for several days. Sanne, who was also living with the two men, testified against his pal Doyle in that trial. After his release in May, the two joined up again.

During his ten years on death row, Sanne testified at an unspecified hearing to being the one who actually shot Randel. Sanne said he was the one who had gotten into the car with agent Randel when they left the motel. His testimony was not believed. Skillern was the one who had the money, agent’s gun, and ring on him when found and his course toward execution was continued.

In 1981, after a ten year long search, Doyle learned he had a daughter who found him while he was on death row. The two spoke one last time for five minutes during the late evening hours before he was executed after midnight on January 16, 1985.

His last words were: “I pray that my family will rejoice and forgive, thank you.”

When asked if she felt any relief, Randel’s widow, Wanda Randel Hogg of Odessa, said the execution “really does” ease the pain she felt for ten years after her husband’s death. “It was a great relief that it all over,” she added.

According to the Texas Department of Corrections Online Inmate Search, Sanne is still alive and is currently being held at the Ramsey Unit. He was denied parole on July 17, 2013. His next parole date is in 2016. He is eight-two-years-old. Randel, if he were still alive, would be eighty-one. He was the first DPS narcotics agent, and undercover narcotics agent ever killed in the line of duty.