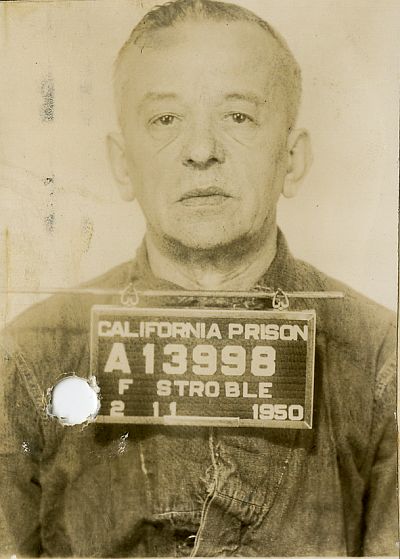 Police Sgt. Bill Brennan said he definitely had established that the blanket came from the home where Fred Stroble, 67 year-old baker, lived nearby. Stroble has been missing since last night, shortly after Linda disappeared, and a police broadcast has ordered his arrest. It described him as “wanted on suspicion of murder.”

Brennan said the girl’s head had been bashed in by an axe found lying on the ground near her chubby form. In an incinerator nearby were her underclothes and an eight-inch butcher knife. Police said the knife apparently was not used in the crime. A whisky bottle and a wine bottle lay on the ground.

The gruesome find, a few steps from a church on busy La Cienega Boulevard, climaxed an all-night search of the neighborhood.

Deputy Police Chief Thad Brown said Stroble had been sought since May 11, when he failed to answer

a child molestation charge and forfeited $500 ball. Brown said the baker was believed to have gone to Mexico at that time, and a bench warrant issued against him had never been served. The case involved a 10-year-old girl living in suburban Highland Park.

Investigators learned that Stroble returned from Mexico only a week ago. [This is not true. Stroble was at his daughter’s home, where he lived, the entire time, but police never checked his own residence. When his son-in-law threatened to turn him, he got drunk and molested the second girl].

Police said they delayed putting out an all points broadcast on Stroble for more than four hours after the crime was discovered because of variations in descriptions of the man.

The La Cienega-Crescent Heights section is in a finger of corporate Los Angeles, on the southwest side, bordered by Culver City and Beverly Hills. It is not far from 20th Century-Fox Studio.

Det.-Sgt. R. T. Reid and Lloyd Baughn, in charge of the inquiry, said the man they seek lived in a house near where the body was found, but disappeared last night, taking his clothing. An all-points police bulletin set in motion a search for him throughout the West.

The officers said Linda Joyce and a granddaughter of the hunted man are almost constant playmates. But they were not together yesterday. Linda was playing alone because her friend had gone t o a birthday party.

“It’s horrible . . . unbelievable,” screamed Mrs. Lillian Glucoft, the girl’s mother and wife of Jules Glucoft, a commercial artist, when she learned of the gruesome find.

The little neighborhood of postwar stucco homes, on the edge of the Crescent Heights section — an established neighborhood of big Spanish-type homes with red tile roofs—was thrown into confusion by the brutal killing. Little knots of people gathered at street corners, outside a police cordon which kept all away from the backyard where the body was found, until crime laboratory experts had completed a minute examination.

Because of the absence of blood in an alley behind a six-foot fence, detectives believe she was killed in the yard. But they did not discount a theory that her slayer tossed her limp form over the fence as he fled.

Glucoft is 36, his wife, 33. They have an eight-year-old son, Richard. Glucoft came from Milwaukee, Wis., but has lived here about 20 years. His father, Joseph Glucoft, was a Milwaukee watchmaker who now lives here.

Of the killer, Glucoft said: ” It’s a crime that was allowed…to walk around a free man. I only hope he commits suicide—it would save a lot of notoriety we don’t want.”

Mrs. Glucoft screamed out her horror, then fainted. She was placed under a physician’s care in an hysterical condition. Capt. Ray Pinker, head of the police crime laboratory, and his men took over the yard where the child’s body was found. They permitted no one but crime lab men to enter as they photographed and fingerprinted the yard, inch by inch, and all objects in the area.

It was in that vicinity that the murders of Nina Martin and her sister, Mae, occurred in 1924—a case that led to the conviction of Scott C. Stone, a night watchman.

Stroble, the grandfather of one of Linda’s favorite playmates, poured out his sordid story to District Attorney William Simpson as a 48-hour fugitive search throughout the week and into Mexico wound up yesterday on stool in a downtown Lobs Angeles bar — about five blocks front Central Police Station.

Simpson said Stroble, formally charged with murder, admitted that he strangled and bludgeoned the little girl to death when she resisted his improper advances. Arraignment is scheduled today in municipal court.

“I had been drinking all day —wine. I wouldn’t have done it if I wouldn’t been drunk,” Stroble was quoted.

Simpson said the ashen, gray-haired grandpa—who liked to buy kids ice cream and candy— then told of enticing Linda into a bedroom of the home where he lived with his daughter, her husband and their two children. The story:

“I was playing with her (Simpson said this involved an act of molestation, but not rape) when she started to scream. She was resisting me.

“This wasn’t the first time. I had played with her once before. “I strangled her first with my hands, then with a tie. She was quiet. I wrapped her up in the blanket and carried her out to the incinerator… I stabbed her with the ice pick, and then I slammed her with the flat aide of the axe six times on the head.

“Then I went back into the kitchen and got a (butcher) knife. I remembered a trick I learned while watching the bull fights in Mexico. I stabbed her in the back, just below the skull, between the shoulder blades. That makes death come easily and fast.

“The little girl did not suffer too much. She was dead within eight or ten minutes.”

That was about 6 p.m. Monday, Stroble said. Linda’s body was found the next morning and the search started.

Stroble told how he boarded an interurban train for Ocean Park and stayed in cheap hotels at the beach city for three nights.

He said he had thought about suicide, by jumping off the pier, but decided yesterday morning to return to Los Angeles and “give myself up. ”

He had just returned on a bus and gone into the bar for a glass of beer when a laundryman, Bill Miller, spotted him and told rookie traffic policeman, Arnold W. Carlson. Carlson confirmed the identification and Stroble submitted without protest.

A Jury of 10 women and two men, which took the case yesterday, actually deliberated about three and one-half hours.

Thus, in only a little over two months, the state had captured, tried and convicted the 68,-year-old shifty-eyed baker who, in a signed statement, said he choked, stabbed,  hacked and bludgeoned the little girl last Nov. 14 when she resisted his fondling advances.

Stroble also pleaded innocent by reason of insanity, and will be tried immediately on the second plea. The jury’s verdict was guilty of first degree murder, without a recommendation of leniency. This carries an automatic penalty of death in the gas chamber, but under state law must be reviewed by the [state] Supreme Court.

Stroble was impassive as he was brought into court. He took the verdict calmly at first, but then sat down, put his head in his hands and burst into tears. Four bailiffs stood over the trembling slayer.

Superior Judge Charles W. Fricke, setting the sanity trial for 9:30 a.m. tomorrow, instructed the jurors not to discuss the case meantime. If Stroble is found to have been insane at the time of the killing, he would be sent to a mental institution. If found sane, the Supreme Court would then review the case before the death sentence could be imposed.

Weeping, Stroble clasped the hand of his attorney, public defender Al Mathews, and sobbed: “I loved her as my own child. I never thought of murder. I must have been crazy.

If I’d planned a murder I’d have done it in half a minute. I didn’t plan it, because I would have thought of my grandchildren.”

When a reporter asked Stoble if he was afraid to die, he said “I’ll do what God wants me to do.”

Fred Stroble was executed in the San Quentin gas chamber on Friday, July 25, 1952. Before he died, he expressed deep remorse for his crime.

It might seem hard to believe but by the time he was executed, most states did not have specific laws against child molestation and rape. According to Alison Arngrim, the woman who played Nellie Olsen in the TV drama, Little House on the Prairie, the punishment for child rape in California before 1950 was just 30 days in jail.

A more graphic account of Stroble’s crimes can be found here.