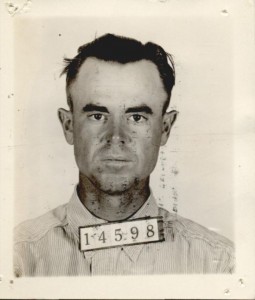 Today’s mug shot belongs to Tulsa bank robber Coney Coffey. Coffey robbed a bank in Tulsa in 1924 and was sentenced to 25 years in prison. While in prison, he contracted tuberculosis. He escaped twice in 1934 by tunneling underneath the tuberculosis wing of the Oklahoma State Penitentiary hospital with 7(?) other prisoners. During his second escape, four of those seven, including Coffey, kidnapped a couple to steal their automobile. When recaptured in Jan of 1935, they were charged with kidnapping.

When his photo appeared in an Oklahoma City newspaper, the caption read: $25.00 Reward: Will be paid for the arrest and delivery of this man to any authorized Officer of the Oklahoma State Penitentiary. 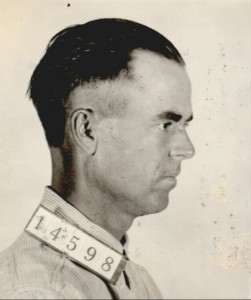