Army Wife Acquitted for Murder of Horrible Husband in 1955 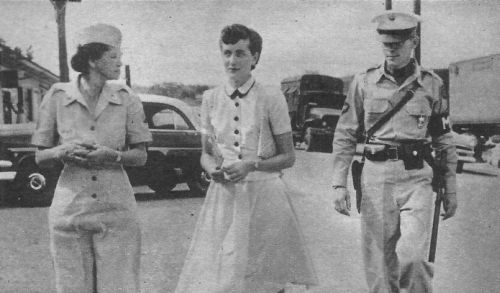 [Sendai, Japan, Aug. 6, 1955] — An attractive 26 year-old Army wife on trial for her life yesterday told an Army court-martial through shuddering sobs how the husband she Is accused of murdering bragged of his lurid sex life, beat her end threatened the lives of her children and herself.

Brunette Mrs. Romola Abidin, Queens, NY said the fatal shooting of her helicopter pilot husband, Robert, climaxed a night of beastiality and brutality during which he beat her with a belt and choked her at their home on “cherry Blossom Lane.”

She collapsed in tears as she described hew her husband ran toward the room of their three children shouting “I’m going to kill your kids now.”

Then she said, “something happened.”

The next she recalled, she told the packed and tense courtroom, her husband was on the floor pleading “Romola, get me to a hospital.”

He died a few minutes later of a bullet wound in the abdomen,

The Army prosecutor has charged her with premeditated murder, Conviction could carry the death penalty.

[August, 1955] In Japan, an army court martial listened and shuddered as Mrs. Romola Abidin, on trial for the murder of her pilot-husband, unfolded the story of her eight years of marriage.

Sometimes, she said, he made her and the children eat off the door to the kitchen oven because he couldn’t stand the sight of them. Once, on a Japanese beach, he looked at the kids and said, “I wish I had a cave where I could put them and let them starve to death.” Twice he tried to force her to have abortions.

On his last night he bragged of his love life. “There isn’t a man around who’s had as many women as I’ve had.” Then he told her how he’d seduced her best friend, as well as the wife of a colonel, a New York TV actress, numerous army nurses, and once, a Japanese airline hostess “on one of the plane’s seats, in front of a general.”

Then he told her, “You haven’t had a beating in a long time,” and started whacking her. He choked her, kicked her, flung her across the room. At breakfast he stabbed her with a fork, and threatened to have her killed.

Then, she said, he threatened to kill the kids and ran into the room where they slept. “I grabbed a gun,” she told the court, breaking into sobs, “and something terrible happened.” The something terrible, said the army, was murder. But the men who heard story said no, promptly announced a verdict of innocent.

[Sendai, Japan, Aug. 7, 1955] — Mrs. Romala Abidin who shot and killed her officer husband was informed unofficially Monday she will collect his government insurance, his back pay and a special “gratuity” from the Army.

The 26 year-old mother of three whose stateside home is Bayside, NY, was found innocent Sunday of premeditated murder In the Cherry Blossom Lane shooting of her warrant officer husband, Robert, 29, a helicopter pilot.

Army sources said she was expected to receive a $10,000 insurance policy, a special “gratuity” of about $2,000 awarded to dependents of soldiers who die “in line of duty,” and his back pay.

In addition she is entitled to social security benefits and a Veteran’s Administration pension, Army sources said the pensions probably would total about $250 monthly.

Attorneys for Mrs. Abidin said they did not know whether she would receive the entire $10,000 insurance because there was a possibility that Abidin’s mother, Mrs. James Abidin of Flushing, NY, was beneficiary to half the amount.

Although Abidin was killed at  home and did not technically die in line of duty, an Army legal source said it was Army policy to interpret the gratuity matter “as broadly as possible.”

A U.S. Army general court martial freed Mrs. Abidin after hearing that he forced her into sexual indecencies and threatened to kill their three children.