Early in April of the year 1916, I was summoned to Boca Grande by the president of the C. H. & N. railroad. The little town being only twenty miles from Tampa, I drove down in my car and went at once to call on him. I gave my card to the office boy and he ushered me into the president’s private office. The president received me cordially. 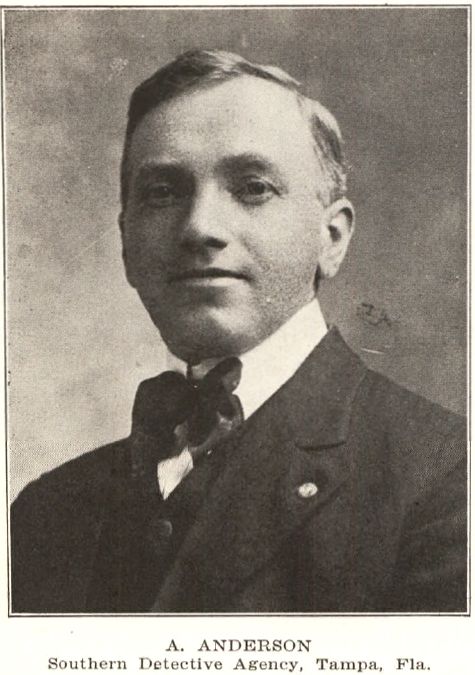 “I received your wire this morning,” I said, “and decided to come immediately.”

“I am glad you are here,” he replied. “I am anxious to have you get to work on this case at once.”

I asked for the details.

“Harry Stackhouse, one of the contractors employed by this railroad, obtained about $12,000 from the company under false pretenses and he has disappeared,” the president told me. “In handling this case, great secrecy will be required, because I suspect his friends and relatives here in Boca Grande will keep him posted on our movements as much as possible.”

“How long has he been missing?”

“Fully two weeks. He was in league with Lankford, our chief clerk, who had the power to approve all vouchers for work performed. The vouchers were passed and cashed by the First National Bank, and these two men evidently divided the spoils. The deficit was discovered the first of March. Lankford, unable to bear the disgrace which he had brought upon his wife and children, committed suicide.”

“Has a picture of Stackhouse appeared in the newspaper?” I asked.

“Yes,” the president answered, and taking a newspaper from a drawer of his desk, he handed it to me. “We furnished the editor with a cut of Stackhouse, which was used in our ‘Railroad Men’s magazine,’ he explained. “I believe it is the only picture available.”

“I don’t know whether I can locate this man or not from this picture,” I frankly told the president. “This picture might pass for Bill Jones or Sam Smith, or a hundred other men. But it is better than nothing. Fortunately this is a profile and it may be of some help.”

Tearing out the picture, I placed it in my vest pocket, and left Boca Grande to begin work on the case.

I went first to the clubrooms in Tampa where Stackhouse had formerly visited. It was impossible to get any information there, but I did learn that his son, who was a traveling salesman in the northern part of the state, had headquarters in Jacksonville.

With this information to begin work on, I left at once for Jacksonville. On arrival, I went to the Seminole Hotel. Entering, I left my traveling bag near the entrance. I went to the cigar stand and bought a couple of cigars and an evening paper. I remained near the cigar stand looking over the headlines in the paper until the other persons who had entered the hotel with me had registered and were shown to their rooms. Then I examined the register to see what room Stackhouse occupied. Noting that he had checked out the day before, I asked the clerk if he could give me room No. 354, the same one Stackhouse had previously occupied.

“Yes,” the clerk answered, and turning to the bellboy, he said: “Show this gentleman up to room No. 354.”

The room was in the front of the house on the third floor with connecting bath. A thorough search of the room revealed no clue of any kind worthy of consideration. The bath was the thing that appealed to me just then. After a brisk rub and fresh linen, I went out to have a look at the city.

About 11 o’clock, I returned to the hotel and went to bed. I lay awake studying the best way to proceed, but could not see anything to be gained by remaining in Jacksonville. The next morning, I was preparing to shave, and began looking for a piece of paper to use for the lather when I caught sight of something white protruding from beneath the dresser scarf. It was a small piece of paper torn from a telegram. The words “Harry Stackhouse, New Orleans, La.,” were plainly visible. I decided to take the next train for that city.

The morning after my arrival in New Orleans, I visited telegraph offices until I obtained a copy of the telegram I had found in the room at the Seminole Hotel. I made a note of the address at which it was delivered. Then, through the city detective department, I met an inspector, whose services I enlisted. We prepared a decoy special delivery letter, and I delivered it, impersonating a special delivery messenger. When my knock at the boarding house door was answered by the proprietor, I inquired if Mr. Harry S. Stackhouse roomed there.

“He roomed here until ten days ago,” the man answered.

I gave him the special delivery letter, but he refused to sign for it, saying he did not know where to forward it. I departed somewhat disappointed in being again just a little too late.

At the corner drug store, I searched the city directory, jotting down the address of every person by the name of Stackhouse. I began with the first name listed and went the rounds, finding only one family with whom I was able to obtain an interview admitting relationship to Harry Stackhouse.

“Are you the only kinsman he has here?” I inquired.

“Yes, I think so, and I am his third cousin,” this man said.

“Do you know if he has any relatives anywhere else?”

“He had a sister in Shreveport, La. She may have moved. It has been about eighteen years since I heard from her.”

From this man, I learned the name of the sister was Mrs. Weatherford, and that she had resided at No. 515 Kings Highway.

When I arrived in Shreveport, I went immediately to the Kings Highway address. As I drew near No. 515 in my automobile, I purposely “killed” the engine. I then went to the house and asked permission to telephone to a garage.

A young man about 18 years of age opened the door, and he invited me into the living room where the telephone was located. After I had telephoned to the garage, the young man offered me a chair, saying I could wait until the repairer arrived.

I had made such a thorough study of the picture given to me by the president of the railroad, that I thought I saw a striking resemblance between it and this young man. The assistance I telephoned for came in a few minutes, and I arose, saying: “To whom am I indebted for this favor?”

“Harry Weatherford is my name and I am glad to have been of some service to you, Mister—”

“Wright,” I substituted. “Are your parents living?”

“My mother is living,” he replied, “but she is out shopping today.”

Thanking him again, I left. I drove to the post-office and saw the inspector. I asked him if I could have a look at Mrs. Weatherford’s mail. We selected a letter with typewritten address, which had been mailed on a train running through Texas to New Orleans. I waited patiently for several days in the hope of seeing a reply from the same source, but none came. I requested the inspector to issue orders to the railway mail clerks working on the southbound Texas-Pacific railroad to find out where this letter had been posted.

The following day I was called to the postmaster’s office He handed me a letter, which had been mailed in Galveston, and addressed to Mrs. Weatherford. Holding the letter to the light, I could see another envelope enclosed, and by careful tracing, I made out the name Stackhouse. I watched the Weatherford home and at 12 o’clock that night. I followed young Harry Weatherford to the Union Station and saw him drop the usual mysterious letter in the mail car of train No. 22. With a feeling of victory in sight, I journeyed to Galveston.

In Galveston, as usual, I made my arrangements with the postmaster and inspector, regarding all mail addressed to Stackhouse. Several weeks watching brought no new developments, and I confess I was beginning to feel somewhat discouraged, as I had now been at work on the case nearly ten weeks.

One afternoon I was caught in a thunderstorm, and I took shelter under an awning in front of a grocery store. While there, I observed an elderly man crossing the street at an-angle.

His hat blew off and came circling in my direction. I stepped forward, and picking up the hat, handed it to the owner. To my great astonishment, I was face to face with Harry Stackhouse. He thanked me and passed on. I followed him at a safe distance.

He went to the post-office. I stood behind him at the general delivery window, and heard him ask for mail addressed to Harry S. Brooks. He received a letter and went out. I kept a few paces behind him and saw him enter the Tremont Hotel.

I went at once to my room at the Galvez Hotel, packed my bag hastily, and with an air of “just arrived,” I entered the Tremont, went to the register, and checking over the guests, found the name “Harry S. Brooks.”

I walked through the lobby to where he was sitting reading a letter, and I addressed him in a low voice as “Mr. Stackhkouse.”

He looked up suddenly, hesitated, and then replied: “No, my name is Brooks.”

“That’s strange,” I said quickly, and drawing the picture from my pocket, I held it before him.

He laughed a little nervously.

“If that is intended for me, it is a mighty poor specimen,” he said.

He began looking first in one direction and then in another, as if contemplating escape, but he evidently realized that I was a secret service man and ready for an emergency.

“I have been scouring the country for you,” I said, “and it’s time you turned up or I would have lost my reputation.”

He grinned and replied: “Well, chief, if you’ve got me, I suppose I might as well get ready and go along with you.”

That night we left for Boca Grande, where I turned him over to the sheriff.

Editor’s Note: I could find no further information regarding Harry Stackhouse. For embezzling during that time period, I’m guessing he was sentenced to somewhere between five and ten years to a state prison, and was probably out in three years if he behaved well.