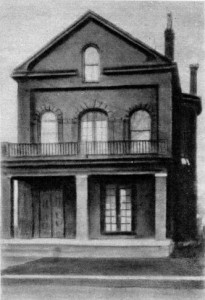 The Torture House of Louisville

Recently, while in my office in Louisville I was pondering on the dullness of life–in particular, of a detective’s life—when’ a question was put to me by a friend who had dropped in for a chat.

“Lieutenant, do you remember the Gates-Heaton case, here in Louisville?”

“Do I remember the Gates-Heaton case?” I replied. “I don’t suppose anyone who had anything to do with it will ever forget it!”

My friend’s query brought back the memory of that strange case—one of the weirdest I have ever known in all my years of police work. And, after a few remarks had been passed, I consented to tell him the story:

It was about 6:30 P.M. on a Saturday night, six years ago—March 8th, 1924, was the date, if I remember rightly—that we received the call at the Louisville Police Department Headquarters.

“A man has been shot!” the voice over the telephone shouted. “You’ll find him at Six-Thirty-Seven South Thirty-Fourth Street!”

Accompanied by several of my men I reached the scene in record time. We found the body on the second floor, in the bedroom. It was lying near a mattress—a circumstance odd in itself, because that mattress was lying on the floor. Surrounding the mattress were four steel staples driven into the floor. No one missed the picture it created, together with a number of surgical instruments that were in the room also.

Not much more than a glance showed us that the man was dead. There was a gaping hole in his neck, another near his heart. Several persons were in the room and, as is usually the case, they were incoherently babbling words about the killer. He had raced from the house, they said, when he made sure, on a doctor’s word in fact, that his victim was dead. On the killer’s wrists were handcuffs, his body was trembling, his face pallid.

Click Here To Read the Rest of this Story