While conducting research for a story about a double-homicide in 1898, I came across an account of all known lynchings for that year. The statistics were interesting and confirmed what you might suspect, but also revealed some surprising information.

Out of 127 lynchings in 1898, five of them were women. As expected, African-Americans represent the majority with 102 black men and women murdered, while only 23 whites and two Indians met a similar fate. By far, most of the lynchings occurred in the south with 118.

The report also reveals the reason for each lynching—and that’s where it gets interesting.

I do not possess the academic qualifications to comment on all the social injustice this document contains. I will leave that for the experts. However, there are few cases from this point worth spotlighting. Some of the more outrageous reasons to lynch a man include: “insults;” “paying attention to a white girl” (I looked up this case and read that the white girl enjoyed the attention); “resisting assault” (so, he was just supposed to take a beating and not fight back?); and “violation of contract (whatever that means).

In a few of these cases, there are links to where I looked up the case and copied a newspaper article which described the events that surround the lynching.

Also worth noting is that in 1898, lynching didn’t necessarily mean hanging. Instead, it could mean a homicide inflicted in any manner by a group, gang, or vigilante mob that denied the individual his or her right to due process.

If you would like to search for more information on any of the names listed below, you can try the Library of Congress newspaper archives. You will have to use the advanced search option and exact match for search terms.

The criminal work of mob murderers throughout the country has decreased during 1898, as compared with 1897, being smaller than in any year since 1885, except 1890, when the number was the same. ‘Judge Lynch’ has executed 127 persons during the year, 122 males and 5 females. The following table, showing the number of lynchings through a series of years, will be of interest at the present time, when this question of lynching is occupying the attention of legislators in several states:

The Lynchings in the various States and Territories [during the year 1898] were as follows:

Of these lynchings, 118 occurred in the South and 9 in the North. Of the total number 102 were Negroes, 23 whites, and 2 Indians. The alleged crimes for which the victims were lynched were as follows:

Here is a link to a partial article on the “Phoenix riots.”

27 Three Negroes (no names given), assaulting a white man, near Meridian, Mississippi. (3) 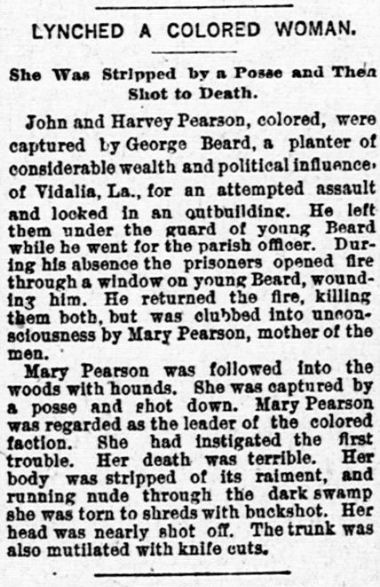 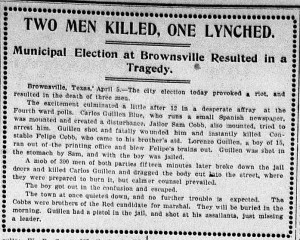 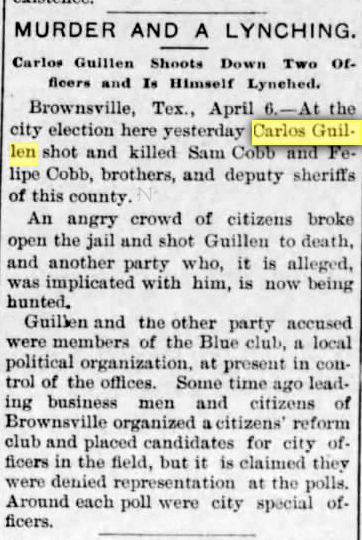