Okay, this may not be a crime story per se, but there was no way I was NOT going to post this from our: “We couldn’t make this up department.” The only crime committed here is stupidity.

[LOS ANGELES. May 1, 1941]- In blasé, nonchalant tones, Samuel Brummel, 56-year-old insurance salesman, testified Thursday that his wife rented him out to another woman for a year for S10,000, promising him half of the money. Brummel, a dark, cigar-chewing little man, told the story as trial of his suit to divorce Mrs. Lillian Brummel, 55, and to collect his half of the “fee.”

The other woman is Mrs. Norma Peppin, middle-aged county employee, who married Brummel in 1938 but obtained an annulment on grounds that the first wife’s Mexican divorce was illegal.

Following Brummel to the stand, Mrs. Lillian Brummel denied making any such deal with Mrs. Peppin.

Following Brummel to the; stand, Mrs. Lillian Brummel denied making any deaf with Mrs. Peppin. She said Mrs. Peppin volunteered, before the Mexican divorce, to give her the $10,000 as compensation “for the harm done me,” by Mrs. Peppin’s failing in love with Brummel.

In commenting on discrepancy in the testimony, Superior Judge Starry F. Sewell issued a subpoena to bring Mrs. Peppin into court.

Brummel, asking for $5,000 from his first wife as part of the community property, was questioned by her attorney, John A. Cronin, regarding his claim.

“Where did this money come from?” Cronin asked.

“It was a business deal,” Brummel replied.

“You testify in a deposition that your wife had an agreement where she was loaning you out for S10.000?”

“What did you say to the arrangement?”

The deposition then was read into the court record and in it Brummel elaborated on the so-called business deal:

“In the summer of 1937, I came home one day and my wife told me she had a good surprise for me—that this woman was inheriting a large estate that might amount to $80,000” read Brummel’s deposition.

“My wife said she had arranged everything for $10,000; that she would go ahead and get a divorce: that I would not stay with her for a year, but that I was to come back to her after that. In other words, she was just loaning me to her.”

Brummel detailed how his wife promised to give him half the money after he divorced the second Mrs. Brummel.

Asked if he continued to see his first wife while he was married to the second, Brummel said: “Oh, yes, we saw each other right along.”

The first Mrs. Brummel testified later that she received the $10,000 bu that it was given by the second wife for a reason other than that which Brummel. 56, related.

“She came to me in 1937 and said: ‘I am going to make a confession and tell you something that will surprise you.'” Mrs. Lillian Brummel, 55, told the court.

“She said ‘I’ve done the worst thing I could do to a dear friend and so I want to do for you  now what I would expect someone else to do for me under the same circumstances. I am in love with Mr. Brummel. It is just one of those things and I can’t help it but I am going to compensate you. I fell heir to quite a sum of money and I am giving you $10.000.'” 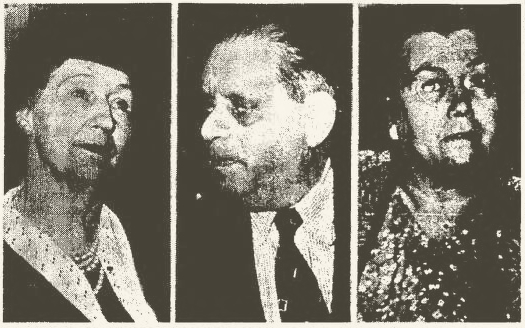 [LOS ANGELES, June 3, 1941] Plump little Samuel Brummel, who claims his wife rented him to another woman for $10,000, today was denied his claim to half the ”rental fee.”

Acting Superior Judge Harry Sewell granted a divorce to the Insurance man’s wife, Mrs. Lillian Brummel and ruled that the 510,000 which Brummel claimed was community, property belongs entirely to the wife.

“The astounding claim made by the husband that in effect he was rented by his wife to another woman for $10,000 and that therefore is entitled to a sham of the proceeds defeats Itself upon the very threshold of the litigation”, Judge Sewell commented.

“To be such a claim upon an alleged state of facts which are in themselves contrary to public policy; to good morals and to common decency would deprive him of the aid of any court of equity and the court would be impelled to leave this parties exactly as it finds them.”

In his testimony, Brummel said Mrs. Norma Peppin, a county employee, came to his wife and said she had fallen in love with him and wanted to “borrow— Mr. Brummel for a year and would pay $10,000 for the loan of Mrs. Brummel’s husband.

The little insurance agent said that when his wife told him of the proposal she promised that if he agreed to be loaned out as proposed by Mrs. Peppin, he could have half of the $10.000 fee.

Brummel related he agreed and Mrs. Brummel obtained a Mexican divorce, following which he married Mrs. Peppin in 1938.

Last year, however, the second, Mrs. Brummel obtained an annulment of her marriage to Brummel on grounds that the Mexican divorce obtained by his first wife was illegal.

It was Brummel, reunited by court order to his first wife, who started the divorce action and Mrs. Lillian Brummel filed a cross complaint charging cruelty.

In his complaint, Brummel listed the $10,000 paid for his rental by Mrs. Peppin as community property and asked for his half-share as had been agreed upon when he consented to marry Mrs. Peppin.

Still pending in court is a civil suit filed by Brummel against Mrs. Lillian Brummel in which he seeks control of the entire $10,000.