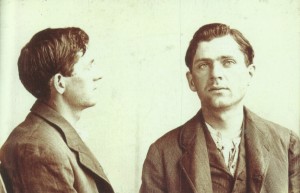 In the 1890s, Leon Czologz joined the growing American anarchist movement because of what he perceived as a great injustice to the common man by the wealthy who exploited the poor to enrich themselves. He blamed government for this inequality and after reading about the assassination of Italian King Umberto I by anarchist Gaetano Bresci in 1900, Czologz decided to take matters into his own hands by killing President William McKinley.

On Sept. 6th, 1901, Czologz caught up with President McKinley at the Pan-American Exposition in Buffalo, New York and with a $4.50 revolver shot at him twice, mortally wounding the president in the abdomen with one bullet. As the crowd pounced on Czologz, President McKinley is reported to have said, “Go easy on him boys, he could not have known.”

Czologz was indicted 10 days later but refused to assist his defense attorneys in his own trial which began on Sept. 23th, just 17 days after he shot the president. He was found guilty the next day and two days later, the jury fixed his punishment as death.

Leon Czologz was executed in the electric chair (a fairly new means of execution at the time) at New York’s Auburn Prison on Oct. 29th, 1901, just 54 days after he shot the president.

As he was strapped into the chair, Czologz told those in attendance, “I killed the President because he was the enemy of the good people – the good working people. I am not sorry for my crime.” However, his last words before the guards flipped the switch were ones of regret, “ I am only sorry I could not get to see my father.”

Get the Latest Updates from HistoricalCrimeDetective.com by following us on FACEBOOK.