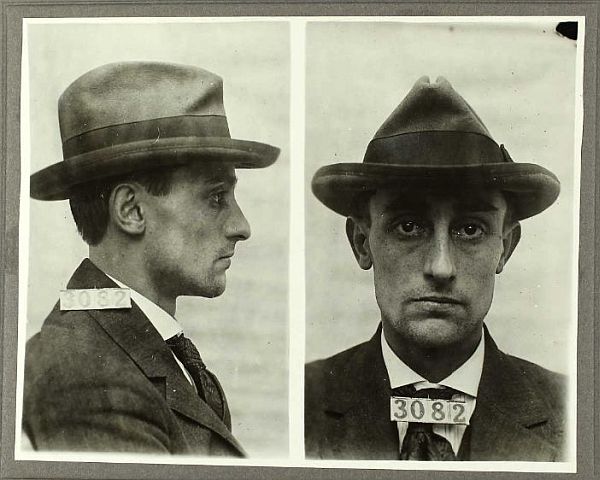 Wesley Leroy Sischo was a former maritime customs agent who decided it was more profitable to work on the other side of the law. During World War I, he began working with a Seattle Chinese gang to smuggle opium into Washington State.

As the captain of a small coastal vessel, it was his job to sail out and pick up floating packages of opium that were dropped a few miles offshore by ships arriving from Asia. He would then bring the drugs the rest of the way to shore and load them into trucks.

In early 1918, he was caught trying to smuggle opium into Port Townsend, Washington. Instead of charging him with narcotics smuggling, the federal prosecutor in his case charged him with failure to declare on his customs claims document that he had opium on board. Sicho was convicted and sentenced to two years in federal prison.

However, and this is where the story gets interesting, Sischo appealed his conviction with the legal argument that he was not required to declare the opium since it was an illegal substance. The Ninth Circuit Court of Appeals agreed and overturned his conviction.

Outraged, the federal prosecutor took the case to the United States Supreme Court which reversed the lower court ruling by 1923. Sischo managed to stay out of prison another two years but eventually began serving out his sentence at McNeil Island prison in 1925 and was released in 1926 or 1927. If he had done his time when originally sentenced, with good behavior he would have been released in 1919.

But that wasn’t the last time the federal court system would deal with Wesley Leroy Sischo. When he got out of prison he returned to his old ways. Here’s where the story gets interesting again.

A Port of Seattle customs agent by the name of Melvin Hanks went undercover as a “corrupt agent” working for a Chinese gang led by a man named Chin Wah. Chin Wah was buying opium in Hong Kong for $2 a tin, and selling it on the West Coast for $100 a tin. That same tin when smuggled to Chicago was worth $150 a tin.

Before he went “corrupt,” Hanks was costing the Chinese gang a lot of money when he initiated new protocols that made it more difficult to smuggle opium into Seattle. Agent Hanks disrupted this practice by having Coast Guard vessels meet ships arriving from Asia offshore and escort them into port. This made it more difficult for them to drop their opium loads in the ocean for pick-up by the coastal vessels.

Tired of losing money, Chin Wah made several bribe offers to Melvin Hanks for a cut of the profits if he could get keep the Coast Guard vessels away from his ships that were transporting opium. Finally, Hanks agreed and became a double agent. To show his loyalty, Hanks was even initiated into the gang by swearing a blood oath to be loyal to Chin Wah.

For the first several shipments that made it ashore, Hanks “earned” pay offs ranging from $1,800 to $2,000 with the promise of $6,000 in the future. Until then, his main task was to arrange with the Coast Guard for their ships to hang back. However, in order to learn who was bringing in the opium to shore, Hanks needed to work his way up in the gang. Rumors circulated that a mysterious man named “Sea Ghost” was the gang’s top smuggler.

To find out more, Hanks accused Chin Wah of holding out on him. Chin Wah responded by calling together a clandestine meeting with the agenda of arranging higher payoffs for their man in the inside. As a result of that meeting, Hanks was able to learn the names of more gang members and associates. He also traveled to St. Louis, Detroit, and Chicago where he personally delivered opium to local Chinese gang leaders.

His trip to the Midwest was very profitable and Chin Wah held a large banquet in Hanks honor. At that banquet, the double agent got to meet the “Sea Ghost.” It was Wesley Sischo.

A short time later, Hanks and his team of customs agent sprang their trap during a large delivery that took place on the Seattle docks. Thirteen people from Seattle to Detroit were arrested, including Chin Wah and Wesley Sischo.

Thirty-eight years later, Melvin Hanks’ memoir was published and is available on Amazon. NARC: The Adventures of Federal Agent.