Kenneth Eugene Cindle, 48, aka “Screwdriver,” was named to the FBI’s Most Wanted List on Dec. 23, 1960 following the shotgun hold-up of a Wichita, Kansas restaurant that netted him and a partner, $236. The partner was quickly captured in Amarillo, Texas. 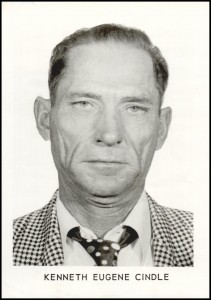 he was an avid gambler, heavy smoker, and heavy drinker. The name of an ex-wife, “Opal,” was tattooed on the outside of his left forearm. He was also missing two fingers. He had a long prison history for armed robberies, assaults, and other offenses. He was picked up by police several times in Oklahoma but was let loose before they could learn his identity. [Not uncommon before AFIS].

He was caught on April 1, 1961 in Cochran County, Texas after a local farmer saw his photograph on television, and recognized him as a hitchhiker he had picked up earlier that day. Cindle had been hitchhiking across the county and working odd jobs to avoid apprehension.

It’s unclear from my archival sources but I believe he was sentenced to 15 years in a Kansas prison as a habitual offender.