This is what happens to people who have poor impulse control. 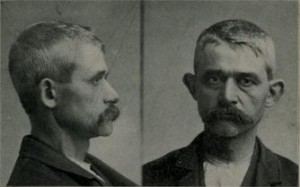 John Wolker, Chicago, 1897, accidentally shot his favorite daughter while aiming at his wife.

John Wolker is a German, fifty-two years of age, and a carpenter by occupation. He is of medium height and rather lean in form. By his first wife he had two children, whom he boarded out in care of a sister prior to his second marriage. He had been boarding with his second wife for some time before he married her, and it seems the union was not born of any sacred spark, but was rather a matter of mutual convenience. During the three or four years they lived together, many quarrels arose, with jealousy and distrust growing stronger, chiefly, it appears, on the part of the wife, who, unlike Wolker, is a robust person.

Finally, one evening, while he was partly under the influence of whiskey and beer and frenzied by his wife’s conduct toward him at the time, he took an old pistol he had kept for a long time and discharged it in the direction of his wife and her two little girls, mortally wounding the one who had been his favorite.

When he told me his story he had frequent spells of hysterical sobbing, suddenly breaking down and as suddenly resuming, but evidently intense in his feeling. He declared he would gladly die for the child’s sake and that he did not realize what he was doing at the time.

He pleaded guilty, and the judge sentenced him to life imprisonment instead of execution, owing to his evident mental weakness. As the testimony in court was one-sided, I am precluded from here discussing the case fully.

But I am perfectly satisfied he is naturally a harmless individual in the absence of great provocation. This was the first charge of a criminal offense against him.