Charles Rumbaugh’s minor notoriety as a killer and criminal only came after he committed the murder that put him on Texas death row.

On April 4, 1975, Rumbaugh shot and killed an Amarillo jewelry store owner, fifty-eight-year-old Michael Fiorillo, during a robbery. When he was arrested the next day, he pulled a gun on the officer who pulled his own weapon and shot Rumbaugh in the right hand.

Rumbaugh, who was only seventeen-years-old at the time of his arrest, was charged with capital murder. A few days prior to the jewelry store robbery, he used two pistols to rob a motel in San Angelo and got away with $350.

His troubles with the law started long before he was seventeen. At age six, he committed his first burglary and at age twelve, his first armed robbery. He was in and out of mental institutions, county jails, and reform schools before he was arrested for murder.

In May, one month after his arrest, Rumbaugh tried to commit suicide with a razor blade. One month later, he tried again by taking an overdose of drugs. (His prison record doesn’t indicate whether these were prescription or illegal drugs smuggled into prison).

In December 1975, Rumbaugh and two other inmates escaped from the Potter County jail by cutting an eleven-inch by eleven-inch square hole out of piece of steel 3/8-inch thick. From the hole they had cut, they tied bed sheets together to drop themselves down to street level where a girlfriend to one of the other inmates was waiting with a car. 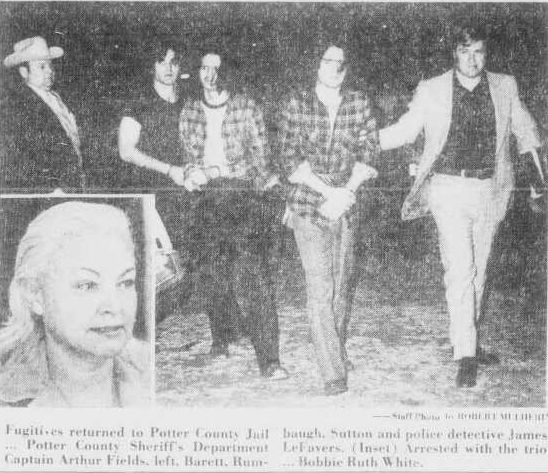 The car with all four of them in it was later stopped during a routine traffic check near Snyder, Texas, approximately 200 miles south of Amarillo. Since the girlfriend had forgotten to bring her driver’s license, all four were taken to the courthouse. There, the three boys overpowered the officer and took his gun. As they were leading him back to their car, another officer, who was arriving at the courthouse, saw what was going on and pulled his own weapon. The first officer then broke free and overpowered the escapee who had his gun.

Following a short trial in April 1976, the jury recommended the death sentence for Rumbaugh, in part, after listening to tape recorded conversations of him after his escape in which he called himself an assassin, and said he would have killed the officer in Snyder—if he had had the gun.

A few days later, during his formal sentencing given by the judge, Rumbaugh was being transported from the jail to the courthouse when he threatened to murder the judge, the district attorney, the bailiff, and his own attorney. Later that same day, they found he was carrying a metal strip seven-inches long and one and one-half inches wide.

In 1980, Rumbaugh won a new trial in which he was again found guilty and again sentenced to death.

During a February 1983, during a mental competency hearing, Rumbaugh was shot in the chest in the courtroom after he lunged at a US Deputy Marshal with a makeshift weapon (a six-inch pick made from wire) while screaming “Shoot me!” He survived after a long hospital stay that involved a chunk of his right lung being removed. 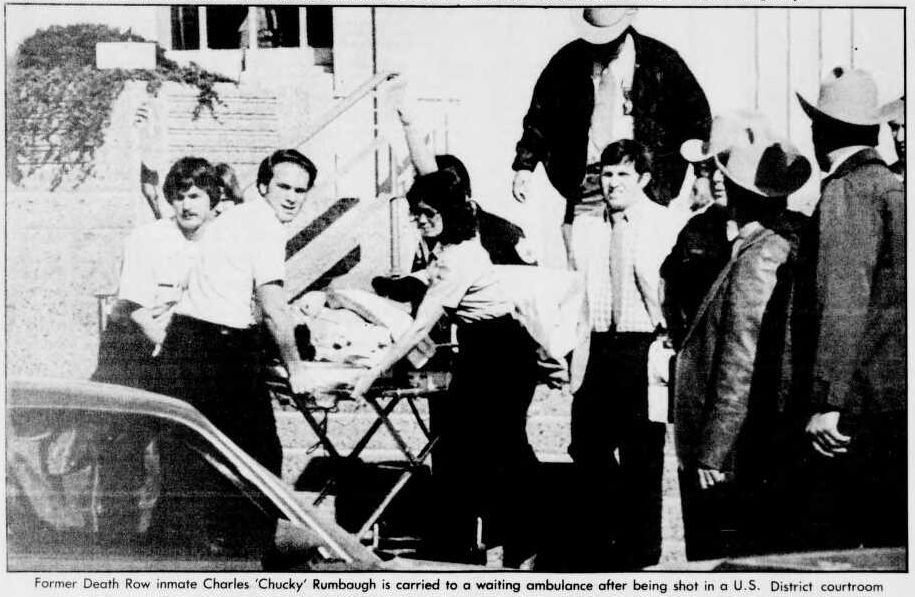 The hearing was called by the American with Civil Liberties Union who questioned Rumbaugh’s mental state for trying to hasten his own execution. The lunge at the US Marshall was an attempt to enforce his own execution, his biographer, D.J. Day Stubben, told reporters. Although she had been friends with the murdered jewelry store owner, she became fascinated with Rumbaugh and his troubled youth and wrote a book about him, #555 Death Row. The number, 555, was his assigned death row number. Stubben, who was married, denied having any romantic interest in Rumbaugh.

In the months leading up to his September 1985 execution, Amnesty International protested his death sentence because he committed the crime while still a juvenile.

On the eve of his September 11 lethal injection, Stubben told reporters that Rumbaugh’s execution was preordained. “He was destined to end up where he is tonight,” she said. “If he hadn’t killed Mr. Fiorillo, he would have ended up killing someone else.”

When asked if he had a last statement, the twenty-eight-year-old said: “D.J. (Stubben), Laurie, Dr. Wheat, about all I can say is goodbye, and for all the rest of you, although you don’t forgive me for my transgressions, I forgive yours against me. I am ready to begin my journey and that’s all I have to say.”

Michael Fiorillo would have been sixty-eight-years-old. He was a bachelor.