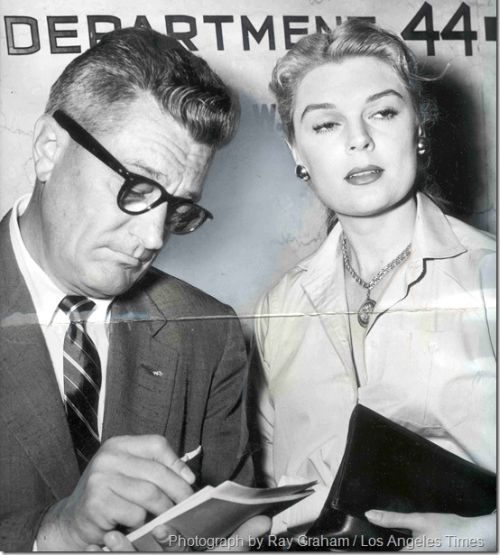 During the evening of July 7, a 1954 Nash Rambler station wagon driven by 28 year-old Lynn Baggett bore into the rear of a station wagon near Waring and Orlando Avenues in Los Angeles. The car she hit was filled with young boys returning from a day trip to a camp site. The force of the crash ejected nine year-old Joel Watnick who was killed when he impacted with the pavement. Another boy, five year-old Anthony Fell, was also seriously injured.

Baggett got out of her Rambler, examined the horrific scene, decided it was too much for her, got back in the small station wagon and took off. She drove several miles to a movie theater where she later said she went to calm herself. For the next 48 hours, police searched for the green Rambler and its driver. They found it in a San Fernando repair shop and arrested Baggett when she returned on July 9 to pick it up. Actor George Tobias identified the car as his and told police he had loaned it to Lynn Baggett.

Because of who she was, the arrest was reported in newspapers all across California. The 28 year-old former Texas beauty queen was a minor movie actress who mostly played background roles whenever a picture called for a beautiful girl in the background. By the time she was arrested, she had only had a few speaking parts. In spite of this, she was well known in Hollywood as the estranged wife of movie producer Sam Spiegel who would later go on to win three Academy Awards.

When she was arrested, she told police: “When I went back and saw the boy lying there, I knew he was dead. I didn’t know which way to turn. You don’t know what something like that does to you. I haven’t slept in 48 hours. I wish I’d been killed instead of the boy.”

Later when newspaper reporters came around to the police station, she sobbed out: “I’m sorry I can’t say anything now. I’m so confused. I wish I was dead!”

After her arrest and arraignment for manslaughter and hit and run, Baggett was released on a $5,000 bond.

Her trial began in mid-October of 1954 and lasted 10 days. On Oct. 27, a jury of 11 women and one man acquitted her on the manslaughter charge but found her guilty of felony hit and run. On Dec. 2, Superior Court Judge Mildren Lillie sentenced Baggett to 60 days in jail and three years probation.

“I am convinced of her attempt to evade responsibility of the law in leaving the scene of the accident,” Judge Lillie said. The judge further added that Miss Baggett was motivated by a feeling of irresponsibility rather than fear or panic in fleeing from the scene and had done “everything in her power to evade detection.”

“I still don’t feel I belong here, but in a way the judge did me a favor,” Baggett told a Hollywood gossip columnist during a jailhouse interview on New Year’s Eve. “This is the end of a cycle of bad luck for me. [Statement shows she doesn’t take responsibility for the accident –it was “bad luck” and not her fault.]

“I have been filled with anxiety because of my marital problems. When I get out I will divorce Sam, try to re-establish my personal life and try to work again. I’ve been in another jail of sorts the past three years.”

Lynn Baggett never worked again. She died in March, 1960 from a drug overdose in her Hollywood apartment. She was 34 years-old.