Leon Turner and the Whitt brothers, 1950

On Jan. 1, 1950 ne’er do well brothers Malcolm and Windol Whitt, and Leon Turner broke out of the Attalla County Jail in Mississippi. The three  men were serving time for the attempted rape of a 15 year-old black girl named Verlena Harris.

Leon Turner had suffered the shame of being convicted for molesting a black girl and his drunken rage gave him the courage to get revenge seven days later. Grabbing their guns, the three men headed toward the dilapidated house of the girl’s step-father, Tom Harris. Leon burst through the door and ordered Tom to tell him where Verlena was. But the girl had heard the men coming and escaped out the back. Turner pushed Harris into the kitchen and shot him in the back with a .38 caliber pistol. Harris fell to the floor twisting in pain, but still alive.

Turner then went into the bedroom where he took out his shame and anger by shooting to death three young children, Frankie, 10, Mary, 8, and Ruby Nell, 4.

Meanwhile, Windol Whitt was trying to coax Verlena to come out from her hiding place underneath the house. Verlena had just made her way out from beneath the house when Turner fired his last two bullets at her. She played dead until the murderers had swaggered away, laughing at what they had just done. When they were gone, she painfully got to her feet and made her way to a neighbor’s house.

The next day, a 100 man posse was formed and tracking dogs from a nearby prison were brought in to find the men. Leading them was a prison trustee by the name of Hogjaw Mullen. Hogjaw was a confident, flamboyant man with the strength and courage to back it up.

Malcolm Whitt was caught that first day but he would not give up the route his brother and Turner had gone. Over the next two days, Hogjaw expertly commanded the bloodhounds who tracked the scent of killers to the house of Turner’s father. The scent grew stronger around the house, and then led to a barn, before trailing off to a potato house two miles away.

The eagerness of the baying dogs told Hogjaw that the killers were inside. With nothing to lose, Hogjaw pulled out a pistol [keep in mind he is a prisoner-trustee and he is armed] marched unprotected toward the shed where he knew armed men were hiding inside. Suddenly, he saw some movement inside and fired all six rounds of his gun into the shed. Terrified, Turner and Whitt came out of the shed and surrendered. Turner had taken a bullet near the spine. When the rest of the posse showed up, Hogjaw was standing guard over the men with an empty pistol.

Malcolm Whitt was sentenced to 10 years in prison for his part in the crime. Leon Turner and Windol Whitt each received a life sentenced. A thorough account of this crime is told in the book, One Night of Madness, by Stokes McMillan whose father was the editor of the local newspaper at the time. The reviews are quite good. 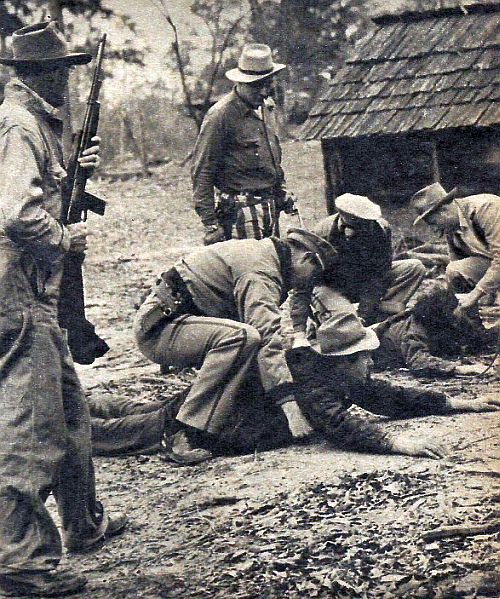 Crippled by a bullet, Leon Turner (foreground, with hat) and Windol White are handcuffed outside the shack where they hid. 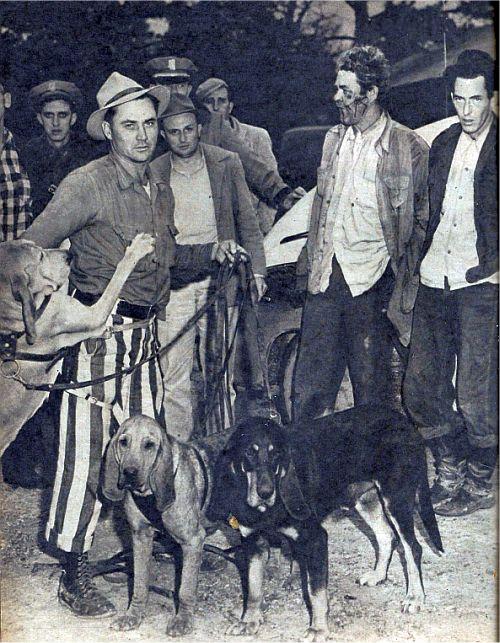 Hogjaw and his blood hounds after the capture of Windol White and Leon Turner.