On September 1, 1879, the Eureka stage, carrying Banker William Cummings of Moore’s Flat, and about ten other passengers, was held up by two masked men near Nevada City.

All the passengers were ordered to leave the stage and hold up their hands. While one robber kept the passengers covered with a gun, the other searched them and the stage. A valise belonging to Cummings was pulled from under the seat and as it contained a gold bar valued at $6,700 the banker sprang at the robber and both men fell to the ground. Cummings was getting the better of the struggle when the robber called to his companion for help. The second robber responded by shooting Cummings in the neck, killing him almost instantly.

The robbers then took the valise and the loot they had obtained from the other passengers and disappeared. 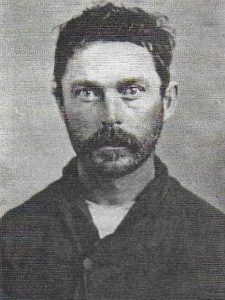 Nothing further was learned in regard to the identity of the robbers until September, 1882, when Captain of Detectives I.W. Lees of San Francisco ascertained that John Patterson, alias John Collins, [Editor’s Note: His real name was John C.P. Collins], who was at the time awaiting trial in St. Louis for a burglary he had recently committed in that city, was probably one of the Moore’s Flat robbers. Lees and Detective Aull of Wells, Fargo & Co. soon convinced themselves that Patterson participated in the crime, and they proceeded to St. Louis with the necessary requisition papers.

Patterson was brought to California and was tried and convicted. He was hanged at Nevada City on February 1, 1884.

Shortly after Patterson was captured, Lees learned that Charles Dorsey, alias Thorne, alias Moore, a prosperous wood merchant in Union City, Indiana, was the robber who killed Cummings, and had obtained his start in business through his share of the proceeds from the gold bar, which the robbers sold at the mint in New Orleans.

“Moore” was so highly respected in Union City that Lees was threatened with mob violence when he went to the town and declared his intention to take him to California to be tried for murder.

There were several old soldiers on the jury, and it is claimed that Dorsey’s attorney’s reference to his client’s brilliant war record saved his neck.