Mary Cecelia Rogers was born in New York in 1820. Her father died when she was five years of age, and as Mrs. Rogers was left in strained circumstances, she earned a living for herself and her pretty little daughter by conducting a boarding and lodging house in Nassau Street. As Mary grew older she assisted her mother about the house.

She developed into an extremely beautiful young woman of the brunette type. She was rather tall; her form was exquisitely symmetrical; her features were regular; her complexion beautiful and she had a wealth of jet black hair. Added to these physical charms, she possessed a pleasing manner which made her a host of friends and admirers.

She attracted attention wherever she went and finally John Anderson, who conducted a large retail cigar store on Broadway near Thomas Street, heard of her marvelous beauty and conceived the idea of employing her both as a clerk and as an attraction. This was in the early spring of 1840, and Mary was twenty years of age at the time. 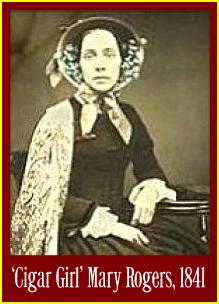 The cigar merchant’s fondest anticipations were soon realized, as customers flocked to the store. The girl’s conduct was apparently a model of modest decorum, and while she was lavish in her smiles, she did not hesitate to repel all undue advances.

After having worked at this store for ten months, Mary failed to appear one morning in the latter part of January, 1841. Anderson was unable to account for her absence and Mrs. Rogers was frantic. The matter was reported to the authorities and the press gave great publicity to the mysterious disappearance of the now famous “cigar girl.”

Six days later, the girl returned to the store, and while she appeared to be in good health, the cheery smile was gone and in its stead appeared a sad, thoughtful expression.

To all inquirers she rather abruptly explained that she had been visiting relatives in the country. Her mother and employer gave the same explanation, but as it was evident that it was a subject that those most interested disliked to discuss, no further details were learned.

A few days after Mary returned, a widely circulated rumor had it that she was seen in New York with a tall, handsome naval officer during the time she was supposed to be in the country. These rumors evidently reached Mary’s ears, for a week had scarcely passed after her return when she suddenly resigned her position and sought the shelter of her mother’s home.

A month later it was announced that she was engaged to be married to Daniel Payne, a young clerk who resided in her mother’s house.

At 10 a. m. on the beautiful morning of Sunday, July 25, 1841, Mary knocked at the door of her betrothed and informed him that she intended to spend the day with her aunt, Mrs. Downing, in Bleecker Street. Payne replied: “All right! I’ll call for you tonight.” As the evening approached, a furious thunderstorm arose and the rain fell in torrents.

Payne spent the day away from home, but believing that Miss Rogers would not desire to go home in such a storm, he did not call for her but proceeded home alone. When Payne informed Mrs. Rogers why he had not called for Mary, the mother expressed pleasure because he had not brought Mary home through such a storm.

The next day, the storm subsided and Mrs. Rogers confidently expected her daughter to return during the day, but as she failed to put in an appearance the mother became greatly alarmed.

When Payne came home to dinner, Mrs. Rogers informed him of Mary’s non-appearance, and, without waiting for his meal, the young man repaired at once to the home of Mrs. Downing. To his amazement, he learned that Mary had not been there at all. The anxious mother well remembered Mary’s disappearance some months previous, but on this last occasion the girl wore very light clothing and a light bonnet when she left home, so it did not seem reasonable that she would willingly remain away after the storm abated.

Under the circumstances, the second disappearance created a greater sensation than the first. For several days no trace was found of her, but on Wednesday morning some fishermen setting their nets off Castle Point, Hoboken, found her terribly mutilated body floating near the shore, not far from a refreshment saloon known as “Sybils Cave.”

The once beautiful face was beaten to a pulp and terribly swollen. Around the waist was fastened a stout cord, to the other end of which a heavy stone was attached. Encircling her neck was a piece of lace torn from her dress, tied tightly enough to produce strangulation. Sunk deeply into the flesh of both wrists were marks of cords. Light kid gloves were upon the hands and the little bonnet hung by its ribbons around the neck. Her clothing was badly torn and subsequent investigations made by the physicians revealed the fact that she had been brutally raped before her death.

Payne was immediately interrogated by the authorities, but he gave a satisfactory account of his movements and was at once discharged. A week passed by without any indication of a solution of the mystery and the press began to criticize the police severely.

The authorities then issued a proclamation announcing that a large reward would be paid for the arrest and conviction of the perpetrator of the murder, and it was furthermore announced that in addition to the reward, complete immunity and protection would be given to any one having a guilty knowledge of the crime (except the real assassin), if such person or persons should be responsible for the arrest and conviction of the assassin.

The next day, the Coroner received an anonymous letter from a young man in Hoboken, who declared that he had seen Mary in Hoboken on Sunday, but had not come forward before owing to what he termed “motives of perhaps criminal prudence.” The writer stated that while walking in the Elysian Fields, then a famous summer resort on Sunday afternoons, he had seen a boat pull out from the New York side containing six rough-looking men and a well-dressed girl, whom he recognized as Mary Rogers. She and her companions left the boat on the beach and went into the woods. The writer was surprised to see her in the company of such rough-looking characters, and noticed that she evidently went with them willingly, laughing merrily as she walked away from the shore. They had scarcely disappeared in the woods when a second boat put out from New York and was pulled rapidly across the river by three handsomely-dressed gentlemen. One of them leaped ashore, and meeting two other gentlemen who were waiting on the beach, excitedly asked them if they had seen a young woman and six men land from a boat a few minutes before. On being told that they had, and on the direction they had taken being pointed out to him, he asked whether the men had used any violence towards the girl. He was told that she had apparently gone with them willingly, and he then, without making any further remark, returned to his boat, which was at once headed for New York.

The author of this letter was never discovered, but the letter was printed in the newspapers, and the next day, the two gentlemen who had been walking on the beach came forward and corroborated the story. They both knew Mary Rogers by sight, and said that the girl who entered the woods with the six roughs resembled her closely, but they were not sufficiently near to be able to positively affirm that it was she.

The next important piece of evidence came from a stage-driver named Adams, who, after allowing several weeks to elapse, stated that on the fatal Sunday he had seen Mary arrive in Hoboken, at the Bull’s Ferry, accompanied by a tall, well-dressed man of dark complexion, and go with him to a roadhouse near the Elysian Fields known as “Nick Mullen’s.”

Mrs. Loss, the keeper of the house, remembered that such a man had come to her place with a young woman on the day in question, and had gone into the adjoining woods after partaking of refreshments. Soon after their departure she heard a woman’s scream coming from the woods, but as the place was the resort of questionable characters, and such sounds were of frequent occurrence, she gave no further thought to the matter.

The exact spot where the hapless girl was brutally raped and then butchered, was discovered by Mrs. Loss’s little children on September 25, exactly two months after the murder. While playing in the woods, they found in a dense thicket a white petticoat, a silk scarf, a parasol, and a linen handkerchief marked with the initials “M. R.” The ground around was torn up and the shrubbery trampled as if the spot had been the scene of a terrific struggle. Leading out of the thicket was a broad track, such as might have been made by dragging a body through the bushes. It led in the direction of the river, but was soon lost in the woods. All the articles were identified as having been worn by Mary on the day of her disappearance.

Every effort was made to trace the “tall, dark-complexioned man,” who answered the description of the naval officer said to have been seen with Mary during her first disappearance, but without success.
It was generally believed at the time that the murdered girl’s mother knew more about her daughter’s mysterious admirer than she chose to tell.

Daniel Payne never recovered from the shock caused by the awful death of his betrothed. The blow evidently affected his mind, and within a few weeks after the murder he committed suicide and his body was found at the spot in the woods where his sweetheart was probably slain.

The crime was the subject of prolonged investigation, but the veil of mystery has never been penetrated that shrouded the fate of the pretty “cigar girl.”

It was upon this case that Edgar Allen Poe founded his tale, “The Mystery of Marie Roget.”