The Murder of Mayor Carter H. Harrison of Chicago by Eugene Prendergast

Carter Henry Harrison was born in Lafayette County, Kentucky, on February 25, 1825, and graduated from Yale College in 1845.

He lived in Chicago many years, and accumulated a vast fortune. Harrison was a Democrat and was elected by that party to the office of Mayor of Chicago, taking his seat on April 18, 1893. He was a grand character and had friends and admirers galore.

Mr. Harrison was a widower and had two grown sons, named Preston and Carter, the latter subsequently serving as Mayor of Chicago for several terms.

On October 28, 1893, Harrison, Sr., visited the World’s Fair, then being held in Chicago, and returned to his home at No. 231 Ashland Boulevard at 5 p. m. After dinner he retired to his room to rest. At 8 p. m. the door bell rang and was answered by a domestic named Mary Hansen who was confronted by a small man about 25 years old, with a wizened, smooth-shaven face. He stated that his name was Prendergast and that he had urgent business with the Mayor.

The servant proceeded to Mr. Harrison’s room to deliver the message, but was surprised to see that the caller had followed her through the hall. The Mayor then stepped out of his room and engaged the stranger in conversation, while the servant went downstairs.

After a brief conversation, the Mayor was heard to say: “I tell you I won’t do it.” Immediately afterward, three shots rang out. 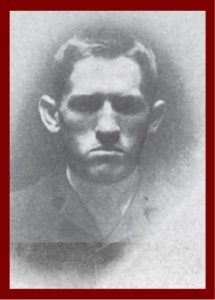 W. J. Chalmers, who lived across the street, heard the shots and after rushing into his own house to notify his wife, he hurried over to the Harrison home. Just as he was leaving his own home he saw the assassin run out of the Harrison residence, pistol in hand, closely pursued by Harrison’s hired man, who stopped when the murderer turned and fired at him.

Chalmers found the Mayor lying in the hall near his room.

An examination showed that one bullet had pierced the abdomen, a second had struck over the heart, and the third had passed through the dying man’s hand.

Preston Harrison was soon by his father’s side, but the Mayor was rapidly sinking and in a feeble voice requested that Miss Annie Howard, his fiancee, be sent for, but he died before her arrival.

Sergeant of Police Frank McDonald was in command of the Desplaines Street station at the time of the tragedy and was in the act of receiving the news of the assassination mega the telephone when he was interrupted by a man who suddenly appeared in the station and remarked: “I did the shooting and this is the gun I did it with.”

Turning around the sergeant beheld a small man with a revolver in his hand, and after disarming him the prisoner voluntarily made the following statement:

“My name is Patrick Eugene Joseph Prendergast, and I was born in Ireland in April, 1868, but I came to this country with my mother when I was two years old.

“I have been a messenger boy for the Western Union Telegraph Co., but recently I have been employed as a distributor for the ‘Inter Ocean’ and ‘Evening Post.’

“I worked hard for the election of Mayor Harrison during his campaign and he promised to give me a position, but as he refused to keep his word I killed him.”

On October 30, Prendergast was indicted by the grand jury and on November 2 he was arraigned.

He pleaded “Not guilty;” it having been decided to attempt to prove he was insane. A great deal of time was consumed in examining into his mental condition, but he was adjudged sane and on December 29 was found guilty of murder with the death penalty attached.

Motions were made for a new trial which were overruled and his execution was set for March 23, 1894. Prendergast was held in contempt by all classes for his cowardly crime.

One Thomas Higgins was sentenced to be executed with Prendergast, and he stated that he did not fear the execution but hated to think of going to his death with Prendergast.

At the eleventh hour Prendergast obtained a reprieve until April 6, and Higgins expressed gratification when he learned that he would not be subjected to the disgrace of hanging with Prendergast.

The latter was granted a new trial and was again found guilty and hanged on July 13, 1894