The Escape and Disappearance of Murderer William Sharkey, 1873

William J. Sharkey was born in New York in 1845. Although his parents were highly respected, William, while he was still in his teens, had a penchant for associating with gamblers, and naturally he soon became one of them. 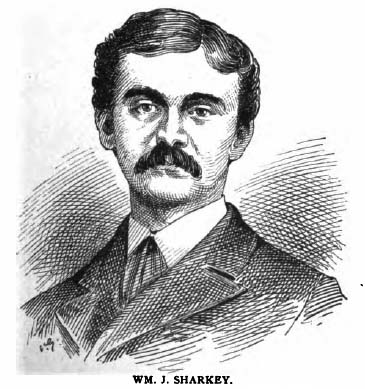 He also became very prominent as a ward politician. Among his associates were many pickpockets, and it was suspected that Sharkey had a “touching way” himself.

In 1872, he loaned $600 to a gambler named Bob Dunn to enable Dunn to open a faro bank in Buffalo. Dunn soon lost the money and returned to New York.

On the afternoon of September 1, 1872, Sharkey met Dunn in a saloon located at 228 Hudson Street and demanded the $600 due him. Dunn stated that he could not pay it, and Sharkey drew a pistol and killed him almost instantly.

Sharkey escaped temporarily, but was soon located and apprehended.

He was tried, convicted and sentenced to be hanged on August 15, 1873.

On August 7, a stay of proceedings was granted pending a Supreme Court decision.

While Sharkey was confined in the Tombs, his sweetheart, a rather good-looking young woman named Maggie Jourdan, was a daily visitor, and brought him books, flowers and cigars. Owing to her apparently exemplary conduct, she made a favorable impression upon the prison officials, who rather admired her for her loyalty.

All visitors to the Tombs were provided with tickets upon entering, which were collected when they passed out through the gate.

On November 19, 1873, Miss Jourdan called on Sharkey at 10 a.m., as had been her daily custom since her lover’s incarceration, and spent several hours with him as usual.

At noon, a Mrs. Wesley Allen called to visit her husband, also a prisoner. Mrs. Allen was seen to stop in front of Sharkey’s cell and converse with the prisoner and his sweetheart. 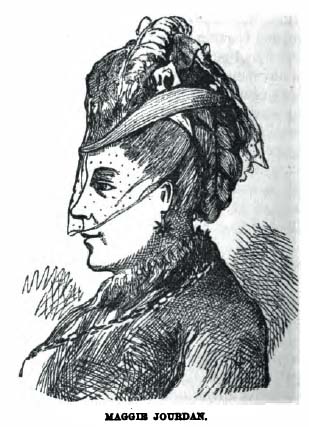 Miss Jourdan left the Tombs at 1 p.m., and shortly afterward a “woman,” dressed in black and heavily veiled, passed out, after delivering “her” card to the turnkey.

Officer Dolan, who was near the Tombs at the time, noticed “her” particularly as “she” very handily boarded a passing trolley car going at full speed.

At 1:55 p. m., Mrs. Wesley Allen approached the turnkey and proceeded to pass out with the utmost nonchalance.

Jail Guard Kennedy stopped her and asked for her ticket. After fumbling in her dress for some time she stated that she must have lost it.

A search was made of the prison, but the only thing unusual found was Sharkey’s empty cell. Some of his prison garb was there and the authorities also found the condemned man’s black mustache, which was still wet with lather.

Two thousand dollars reward was offered for the body of the escaped felon, but Sharkey was never seen again.

Mrs. Allen was released from custody without being charged. Miss Jourdan was charged with assisting a felon to escape, but was never convicted, although it was generally believed that these two women smuggled into the prison the disguise worn by Sharkey, and that he used Mrs. Allen’s pass.

The manner in which his cell door was opened always remained a mystery.