The burglary was committed by digging a tunnel under the building and up to the vault, which was drilled.

Suspicion fell on a former employee named John Winters, who had a cabin about one-quarter mile from the works, and who was said to have been engaged to be married to Miss Ida Spencer of San Rafael, Cal. 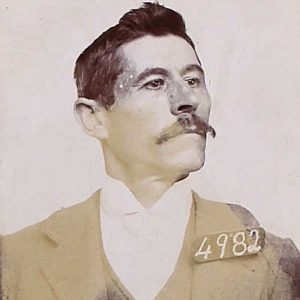 Detective Gibson inspected Winters’ cabin, and there shovels, clothing and various articles were found, on which was mud similar to that found in the tunnel, where his cap was found.

He was traced to San Rafael on August 7, 1901, by Gibson and arrested at the hotel where Miss Spencer resided. It was then learned that he had that day offered to purchase for her property worth $5000.

Winters was brought back to San Francisco, and after an extended cross-examination, during which the evidence against him was produced, he broke down, made a confession and volunteered to accompany the officers in a boat and indicate the place in the bay where he had thrown the bullion, which he had calculated on recovering in the future for his personal use.

The tug “Sea Witch” was engaged, and ex-Chief Lees, Captain Sayers, Detectives Tom Gibson, Charlie Crockett and Winters arrived at the place indicated at 4:30 a. m., August 9. This hour was selected because of the low tide.

Gibson and Crockett stripped and eventually recovered every bar that was stolen.

Winters was tried at Martinez, Cal., pleaded guilty and on August 21, 1901, was sentenced to serve fifteen years’ imprisonment. He was paroled on November 24, 1908.