In 1882 Leon Soeder came to America from Germany. He was by occupation a cook. Under the name of Leon Seter, he committed a burglary in Alameda County, for which he was sentenced to serve three years in San Quentin in October, 1884.

On January 29, 1894, Officer Martin Tannian arrested him for burglarizing Johnson’s Restaurant in San Francisco, for which he was sent to San Quentin for three years.

About 1901, he married Miss Pilar Mirander, of Petaluma. They went to Tesla, Cal., where he procured employment as a cook, and his wife worked as a waitress. Several dogs died from poison in the town while Soeder was there and it was afterwards learned that Soeder had been using the dogs in experimental work.

Soeder and his wife left Tesla in December, 1902, and returned to Petaluma where Soeder had his wife’s life insured for $2000.00. She died shortly afterward under the most suspicious circumstances, but for some reason no investigation was made.

A few days after his wife’s death, Soeder proposed marriage to Miss Lillian Justi of the same town. Shortly after this the restaurant which he was conducting in Petaluma burned down. On this property he had $2000.00 insurance, being far more than its value.

In March, 1903, Soeder met Miss Katherine Flatley at her home, 251 Marshall Street, San Francisco. She was a young woman of attractive appearance, and Soeder presented jewelry to her valued at several hundred dollars. 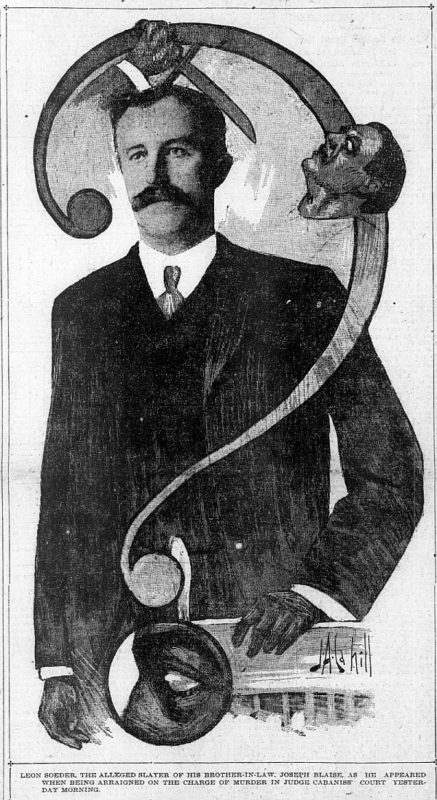 On April 18, 1903, he left for Alaska, returning to San Francisco on September 15 of the same year. On October 16 he left for Germany, telling Miss Flatley that the object of his visit was to obtain $10,000.00 as a part of his interest in an estate.

On October 24, he sent her a telegram from New York stating that he had been robbed, and requesting that she forward $100.00, which was done. He proceeded to Germany, and after much persuasion, induced his sister’s husband, Jos. Blaise, a lumberman, to accompany him to this country, and he also endeavored to induce his own brother to make the trip.

When they reached New York, about December 1, Soeder at once attempted to procure an insurance policy on Blaise’s life for $5000.00, but as there seemed to be considerable delay, he lost patience and brought Blaise to San Francisco, arriving here on December 13. On December 26, Soeder wrote to Miss Flatley announcing his arrival in San Francisco, and informing her that he was sick and desired her to call. He concluded the letter by promising to make her additional presents as soon as his “fortune” arrived.

She ignored this letter, and on December 29 he again wrote, reprimanding her for not calling.

On January 11, 1904, Wm. Hogan, a laborer, was passing along Taylor Street, between Green and Vallejo, where he found a man lying at the bottom of a cliff, and on close inspection it was found that the man was dead. There was a cut on the back of his head and on the right side of the throat was a deep knife wound. His pockets were turned inside out, but this had been so thoroughly done, that it was suspected the object of doing so was to create the false impression that the motive for the crime was robbery. Soeder and Blaise roomed together at the residence of Jos. Neibias at 827 Jackson Street, and on the following morning Soeder told the landlord that Blaise had not been home that night and as he had $90.00 in his pockets, he feared foul play.

Soeder reported the matter at police headquarters, where he was advised to visit the morgue to view the body of the murdered man. He immediately identified the body as that of his brother-in-law, and affected much grief.

Shortly afterward, when it was learned that Soeder was an ex-convict and had a heavy insurance on his brother-in-law’s life, he was taken into custody.

Detective Tom Gibson was assigned to the case and in Soeder’s rooms he found a knife, on which was human blood.

Gripman Chas. Vose, on the Union Street line, stated that he had carried Blaise on his car about 8:30 p. m. January 10, and that he left the car at Union and Taylor Streets, where Blaise met a man standing by the street lamp who resembled Soeder.

Three policies issued by the Pacific Life Insurance Co. were found in Soeder’s possession: Each was for three thousand dollars.

One was a policy taken out by Blaise in which his wife was made beneficiary, in the second Soeder was the beneficiary, and the third was taken out by Soeder and made payable to Blaise. Subsequent investigation showed that Soeder had taken advantage of Blaise’s ignorance of the English language and had his name inserted as beneficiary when Blaise understood that both policies were made payable to his wife. On December 23, Soeder attempted to procure a $10,000.00 accident policy for Blaise, but was informed that as Blaise represented himself to be a cook, he could only procure $3000.00. Soeder showed outward signs of displeasure. He then attempted to procure a $10,000.00 life insurance policy from the Pacific Mutual Life Insurance Co. on Blaise, but as J. M. Kilgarif, the manager, doubted his ability to keep up payments, he would only write a $3000.00 policy. Soeder wanted to pay up for only three months, but the company forced him to pay for one year.

On December 16, 1903, Soeder pawned a watch and diamond ring for $130.00 in order to obtain sufficient money to pay the premiums on Blaise’s policies.

Soeder afterward asked Dr. W. G. Mizner, who was connected with the company, why he was questioned so closely by the officials, to which the doctor replied : “Oh, they thought you wanted to do away with Blaise.” Soeder replied : “Oh, no ; we were schoolmates and he married my sister.” While awaiting trial in the Superior Court, his cellmate was John Cooper, who was in custody on a charge of forgery.

Cooper subsequently testified that Soeder told him that he expected $1000.00 from Germany, and that he would give Cooper one-half if he could procure witnesses who could swear that he, Soeder, was in another part of the city at the time the crime was committed. Cooper produced a piece of the San Francisco Examiner upon which Soeder drew a diagram indicating the spot where the murder was committed.

On the diagram he wrote names of streets, etc. Soeder had previously stated that he had never been near the scene of the killing, but this diagram was drawn with such accuracy that it would have been impossible for a stranger to the surroundings to have drawn it.

After drawing the diagram, Soeder, according to Cooper, admitted that he had committed the murder and that he first struck Blaise with a shovel.

Theodore Kytka, the handwriting expert, proved that the writing on the diagram was done by Soeder.

The defendant also confessed to the murder of his wife. The case was submitted to the jury on May 23, 1904. After deliberating for twenty minutes, they returned a verdict of guilty.