Peter Mortensen was a prominent contractor and builder in Salt Lake City, Utah, and purchased considerable material from the Pacific Lumber Company, of which James R. Hay was secretary and treasurer.

As Mortensen owed this company $3,907 and had been requested to immediately liquidate the indebtedness, he called at the office of the company on December 16, 1901, about 6 p. m., for the purpose of arranging for a settlement.

He there met Secretary Hay and Manager Romney, and gave them an order on another person for $107, and stated that he had the balance, $3,800, at his home at Forest Dale, a suburb of the city, and added that if Mr. Hay, who resided in the same neighborhood, would call upon him that night with a receipted bill, the balance would be paid.

It was nearly 8 p. m. when the three men left the office; Mr. Hay and Mortensen proceeded homeward on the Calders Park car, Hay having the receipted bill in his possession. He arrived at his home at 8:45 p. m., and after supper informed his wife and children that he was going over to Mortensen’s house to collect some money, and that he would soon return.

At 10:20 p. m. Mrs. Hay and her children retired, but at 1 a.m. she awoke and became alarmed at the long absence of her husband. Mrs. Hay remained awake and at 3 a. m. she went to Mortensen’s home, and after arousing him, inquired for her husband. Mortensen appeared extremely nervous and stated that Mr. Hay had left his house hours before and had gone to Mr. Romney’s house; adding that he had probably missed the last car home. The next morning Mrs. Hay telephoned to Mr. Romney, who informed her that he had not seen her husband since 8 o’clock the preceding evening. Romney then communicated with Mortensen, who stated that on the preceding evening he had paid $3,800 to Hay in twenty-dollar gold pieces, which he had concealed in glass jars in his cellar, and that Hay then started to his (Romney’s) office.

Mr. James Sharp, the father of Mrs. Hay, upon being informed of the disappearance of his son-in-law, went with the police to Mortensen’s home. The latter produced the receipt, which he stated Hay gave him for the money, and explained that he and the missing man sat on a small settee while counting the money. The following conversation then took place between the aged Mormon, Sharp, and Mortensen :

Sharp—Where did you last see my son-in-law?

Mortensen—Here (indicating a spot on the walk about ten feet from the house).

Sharp—If that is the last place you saw him, that is where you killed him.

Mortensen—How do you know he is dead?

Sharp—I have had a vision and the proof to you will be that within twenty-four hours and within one mile of the spot where you are standing, his dead body will be dug up from the field.

Mortensen appeared dumfounded but made no reply. At this time the ground was covered with snow. 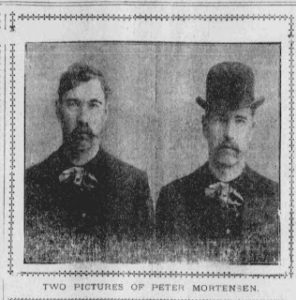 On the next morning, December 18, Frank Torgersen was looking for horses in a field near Mortensen’s house and near a fence which ran parallel with the Park City railroad track, he discovered considerable blood. This caused him to make a close inspection of the neighborhood, with the result that he found a snow-covered mound about the size of a grave. Torgersen then proceeded to Mortensen’s house, where he asked for a shovel. Mortensen loaned him a shovel, stating it was the only one he possessed, although another shovel was subsequently found which had the appearance of being recently cleaned. Torgersen then returned to the mound and after digging for a few moments, unearthed the body of Hay. A bullet wound was found in the back of his head.

The news of this discovery spread like wildfire and a number of people repaired to the scene, among them being Royal B. Young.

Mr. Romney observed Hay as he put the receipt for Mortensen in his inside coat pocket on the evening of the 16th, and when the body was examined this pocket was found turned inside out, but a watch and other jewelry were left undisturbed.

The body was then placed in a wagon and brought to town, Mortensen accompanying the remains. In front of Hendry’s store the wagon was stopped and the father-in-law, Sharp, appeared. Standing beside Mortensen and looking at his dead son-in-law he said: “He murdered you for a receipt that was on your body and he never gave you a dollar.”

Mortensen made no reply but hung his head.

To men named Penrose, Hilton and Sheets he made conflicting statements as to what kind and number of receptacles were used to store the $3,800 alleged to have been paid to Hay, and also as to where they were concealed. To one he said a sack was used; to another he said two glass fruit jars were necessary, and to the third he stated that three jars were needed. To two of the witnesses he claimed that the money was concealed on a wall in the basement, and to another he stated that a portion of it was hid in the pantry.

Upon indicating the place on the wall where the jars were alleged to have been concealed, an examination was immediately made and it was found that the dust was undisturbed. There were four openings for windows in this basement, thus making it very light, but there were no windows and the basement was accessible to strangers. If the glass jars had been placed in the position indicated, the jars and contents could have been easily seen, and it was furthermore demonstrated that one jar of the size described by Mortensen would have been sufficient to hold this money.

Charles F. Watkins, the brother-in-law of Mortensen, stated that he asked Peter if he could show that he had paid Hay the money and he replied : “I can, but as my books are in bad shape it will be necessary for me to represent that you have loaned me $1,500.” Watkins replied that his own bank account would not permit such misrepresentations.

It was shown that the settee upon which Mortensen claimed he and Hay sat while counting the money was too small for two men to sit on.

The moon was shining brightly on the night of this homicide, and John Allen, a motorman, stated that his car passed the spot where the body was found about 10:20 p. m., and he saw a man with a shovel on his shoulder cross the track. With the aid of the moon and the headlight he recognized this man as Mortensen.

On December 18 Mortensen was arrested. During the trial, James Sharp, the father-in-law of the murdered man, testified and on cross-examination counsel for the defendant elicited from the witness the statement that he had received a revelation from God, who told him that Peter Mortensen had murdered his son-in-law for a receipt and buried the body in a nearby field.

As four of the jurors were members of the Mormon Church and believed in the doctrine of revelation, this statement was regarded as most damaging to Mortensen’s case.

His business transactions and financial condition were also the subject of much investigation, and evidence was produced tending to show the impossibility of the defendant possessing $3,800 on the night of the tragedy.

The jury then visited the home of Mortensen in charge of Royal B. Young, who was at the grave when the body of Hay was exhumed, and who accompanied the authorities in their investigation at Mortensen’s home. Mortensen declined to accompany the jury on this tour of inspection.

The defendant was found guilty of murder but the case was appealed to the Supreme Court because of the misconduct of the jury and Young at the premises.

Alma H. Rock, a juror, averred that Young informed the jurors that the premises had been changed since the day of the murder and that he (Young) indicated a spot near a fence where he found a depression in the snow which was caused, according to his opinion, by the body being thrown over the fence, the head striking the snow. Young admitted that Rock’s affidavit was true and a new trial was granted, which resulted in another conviction.

The case was again appealed to the Supreme Court on the grounds of newly discovered evidence, but another trial was denied.

On October 6, 1903, Judge Morse sentenced Mortensen to be executed on November 20, but as the law permitted the condemned man to decide whether he desired to be hanged or shot, the Judge asked :

“What mode of execution do you elect?”

Mortensen stood erect and in a firm voice replied: “I elect to be shot.”

On November 14, the State Board of Pardons refused to commute the sentence.

On the night before the execution, Governor Wells spent a greater part of the night with Mortensen, who presented a most ingenious defense, but the Governor declined to interfere.

On November 20, Mortensen was led into the prison yard at 10:30 a. m., and maintaining his courage to the last, he said:

“I did not kill Jimmy Hay. Neither here nor in the hereafter will I forgive those who are responsible for my death.”

He refused to see a minister of any denomination and also refused stimulants, explaining that he needed neither.

After bidding the guards good-by he was bound in the chair provided for the execution. A physician pinned a piece of white pasteboard over Mortensen’s heart, while the executing squad, consisting of five men, were concealed behind a curtain hung in the door of the blacksmith shop about twelve yards distant. These men were handed loaded rifles, but one of the rifles contained a blank cartridge, thus making it impossible for any one of the squad to be positive whether he fired a bullet or a harmless blank cartridge.

At the command “fire” four bullets pierced the cardboard and passed through Mortensen’s heart. His head dropped on his breast, his hands quivered a moment and then all was still.